Please ensure Javascript is enabled for purposes of website accessibility
Log In Help Join The Motley Fool
Free Article Join Over 1 Million Premium Members And Get More In-Depth Stock Guidance and Research
By Rachel Warren - May 19, 2020 at 7:30AM

The genomics and biotechnology company has launched a comprehensive genetic study in an effort to discover why COVID-19 elicits such an acute response in some patients but not in others.

The coronavirus has swept across the globe in recent months, and companies in all sectors of the healthcare industry have stepped up to combat the pandemic. Many are now scrambling to develop a vaccine.

One of the greatest challenges facing healthcare workers on the front lines, as well as the companies working on vaccine candidates, is that COVID-19 varies so much among patients. According to a report published by the World Health Organization back in March, approximately 80 percent of those infected exhibit mild symptoms or none at all. A study published in the journal Nature Medicine found that 44% of individuals who caught COVID-19 through secondary transmission contracted the illness while the original infector was still asymptomatic.

The most recent data released from the Centers for Disease Control and Prevention shows that 60.5 per 100,000 patients require hospitalization, and death certificates show that the flu, COVID-19, or pneumonia were behind 12.8% of all U.S. deaths from May 4 through May 10. Over 300,000 people worldwide have died of COVID-19. 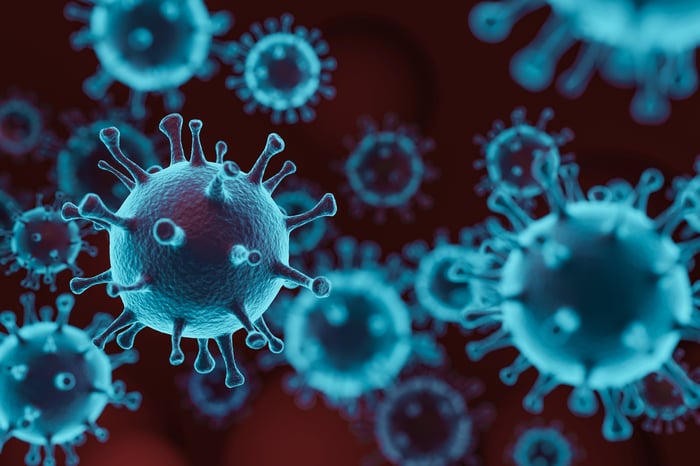 DNA testing companies are rising to the occasion with the launch of numerous studies hoping to crack the genetic code behind COVID-19. Last month, one of the biggest names in the consumer genetics market, 23andMe, initiated a study into the link between genetics and COVID-19 outcomes.

Founded in 2006, 23andMe is a privately held company that offers a slew of popular direct-to-consumer genetic tests and has the power of nearly $800 million of venture capital backing behind it. While 23andMe hasn't yet made its way to the public market, prospective investors and consumers alike should still be watching this start-up and its current study closely.

A genetic study of near-unprecedented scale

23andMe first launched its study back in April, and hundreds of thousands of customers have participated so far through online surveys. In the initial part of its study, 23andMe surveyed customers who had tested positive for COVID-19, as well as customers who had not received a positive diagnosis. The study will also allow contributions from family members of customers who have been ill with the coronavirus. The company will use this information to assess genetic similarities and dissimilarities among critically ill patients.

Last week, 23andMe announced that it was expanding its genetic study to include up to 10,000 adults who are not 23andMe customers and who have been hospitalized for COVID-19. In 23andMe's blog post announcing the study's expansion, the company stated that its research model means it can

not only reach out to current customers, but also quickly recruit and genotype new research participants. We can then survey those participants, and conduct genetic studies at a massive scale. ... There are several questions about whether genetics may explain the differences in immune response among patients. Our study could aid in assessing differences in risk among individuals. It could also guide efforts now under way to treat the disease caused by the virus.

When 23andMe announced its expansion of the study in a blog post published May 13, it noted that more than 500,000 people have enrolled in the study thus far, and more than 7,000 of the participants have been diagnosed with COVID-19.

There's long been talk of 23andMe entering an initial public offering. It's possible the company could be looking to secure more late-stage funding to build its momentum before going the IPO route. A 2019 report released by private investment management firm Wellington Management Company found that

companies are staying private for longer. For example, the average age to IPO for VC-backed companies increased from 4.6 years during the 1990-2001 period to 6.4 years during the 2002-2018 period. As a result, companies are often more mature when they do go public. Businesses with market capitalization below US$1 billion have decreased as a percentage of the public market, from 53% of the Russell 2000 Index in 2005 to 23% as of 31 December 2018. Amid these changes, we recognized that the late-stage growth companies were often in need of capital to accelerate growth prior to, or in lieu of, an IPO or sale.

Many thought 23andMe would IPO back in 2015 when it secured an additional $115 million in a funding round. The company has yet to announce any definite plans to go public.

The pandemic could present new opportunities for genome testing

It's no secret that the consumer genetics market has faced notable headwinds over the past few years, as demand for DNA testing has dropped significantly. The reason behind this decline is not certain. It could be that the early boom in consumer interest wore off, or that privacy concerns got the better of the wider market.

In January, 23andMe laid off 14% of its employees. The company was just one in a long line of venture capital-backed entities that have had to slash their workforces in recent months. For example, one of 23andMe's top competitors, Ancestry, laid off 6% of its employees in early February. Coincidentally, Ancestry has also launched a study into the genomic aspects of COVID-19, but at present is limiting participants to existing customers only.

Naturally, there have been concerns about the fiscal future of genetic services given recent reductions in consumer demand. But with this new foray into genetic research, companies like 23andMe could be well positioned to aid medical providers and businesses in establishing new protocols both during and after the coronavirus crisis. Even though the company's IPO remains uncertain, 23andMe has solid backing and could be making some big moves in the near future. Healthcare investors should find this startup definitely worth watching over the next few years.