Please ensure Javascript is enabled for purposes of website accessibility
Log In Help Join The Motley Fool
Free Article Join Over 1 Million Premium Members And Get More In-Depth Stock Guidance and Research
By Bram Berkowitz – Updated May 19, 2020 at 11:16AM

News outlets are reporting that Germany's largest bank still has not corrected its internal controls related to anti-money laundering.

The Federal Reserve has renewed its criticism of Deutsche Bank's (DB -4.80%) internal controls related to money laundering. The news was reported by multiple outlets, which say the Fed delivered its displeasure at the bank's progress in a letter to Deutsche Bank. The rebuke continues long-standing issues that have been piling up at the German bank in recent years.

Let's take a deeper look at why the Fed continues to reprimand Deutsche Bank and what it means for the bank moving forward. 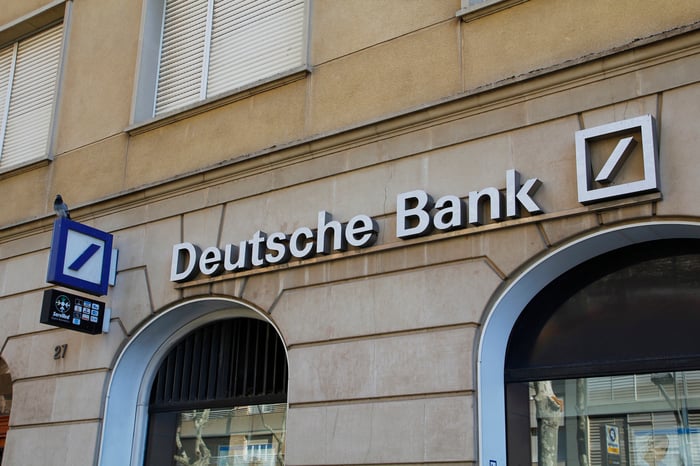 History of the issues

Deutsche Bank's anti-money laundering (AML) issues date back to at least 2017. That January, the bank agreed to pay a $629 million fine to regulators in New York and the United Kingdom for actions that regulators called "highly suggestive of financial crime." The bank's Moscow office helped parties conduct what looked like a transfer of rubles into $10 billion, which then allowed customers to transfer the money out of Russia to banks in Cyprus, Estonia, and Latvia, according to U.K. authorities.

Later in 2017, Deutsche Bank paid another $41 million to the Federal Reserve for "unsafe and unsound" anti-money laundering practices.

Media outlets eventually revealed that the Federal Reserve had secretly designated Deutsche Bank's U.S. division as being in "troubled condition" as early as 2017. That designation, according to The Wall Street Journal, resulted in the bank pulling back on certain trading and lending activities. It also meant the bank had to clear decisions about hiring and firing senior management and reassigning job duties with the Fed.

But Germany's largest bank struggled to stay out of the spotlight. The bank again found itself facing scrutiny in 2018 when an internal review found that it had handled about $150 billion of suspicious transactions carried out by the Danish lender Danske Bank. At the time, U.S. law enforcement agencies were investigating because $230 billion had allegedly flowed through one of its small branches in Estonia.

Reuters reported last October that Deutsche Bank supposedly waited five years after a whistleblower sounded the alarm about suspicious activity at Danske to report the 1 million money transfers it believed were suspect.

All of the issues at the bank spooked investors in 2018, with shares of Deutsche Bank dropping roughly 58% that year. The company's share price remained relatively flat in 2019, a poor performance during a year in which the banking sector performed well.

The timing of the Fed's new warning

The Fed's latest reprimand not only said the bank still needed to improve its AML controls, but also that it had not solved problems that initially led the Fed to categorize Deutsche Bank as a "troubled condition" bank in 2017.

Deutsche Bank CEO Christian Sewing recently posted a speech online that he plans to give at Deutsche Bank's upcoming annual meeting. Sewing said feedback on the bank's progress has been positive from clients, regulators, and shareholders. The bank's U.S. subsidiary passed both parts of the Federal Reserve's stress test for the first time in 2019. However, Sewing did not deny that the bank had more work to do.

"We have also continued to improve our internal controls and processes," he wrote in the speech. "But are we there yet regarding our controls? The answer is no. We must continue to improve here and to invest in our processes -- in close contact with our regulators."

It appeared that Deutsche Bank had actually started to make some progress this year. The bank reported a 67% drop in first-quarter profits year over year, but the company's investment bank division increased revenue 18%, claiming it handled roughly 40% of all European corporate issuances since mid-March when the coronavirus struck the economy. As of Monday's close, the bank's stock price had declined only about 8% from the beginning of the year, in line with the S&P 500. Deutsche Bank continues to not pay dividends, and is in the midst of a major restructuring plan that will ultimately see the bank cut 18,000 jobs by 2022.

Shares of Deutsche Bank declined more than 6% in after-market trading on the Frankfurt Stock Exchange following news of the Fed's renewed reprimand, according to the Financial Times. With the bank's reputation now, any more news like this will continue to let doubt creep into the minds of investors. To see issues called out by regulators in 2017 still not resolved is concerning, and suggests that internal problems at the bank may run deep. The bank has also changed leadership of its U.S. operations twice since 2017. Deutsche Bank really needs to get a handle on these matters if its stock price is to truly rebound.