Please ensure Javascript is enabled for purposes of website accessibility
Log In Help Join The Motley Fool
Free Article Join Over 1 Million Premium Members And Get More In-Depth Stock Guidance and Research
By Jennifer Saibil – May 20, 2020 at 7:40AM

The growing warehouse club or the growing home improvement chain -- which is the better stock pick?

Costco (COST -1.40%) and Lowe's (LOW -1.39%) are both large, national retail chains that were deemed essential services and have stayed open throughout the COVID-19 pandemic. Despite this similarity, they are two very different businesses.

Costco's greatest competitive threat doesn't come from its direct rivals: Sam's Club (which is owned by Walmart) and BJ's are much smaller operations. In fact, Costco's biggest competition might be Walmart itself, another large discount chain whose annual net sales totals were almost four times as big as Costco's $149 billion in 2019.

Lowe's, on the other hand, directly competes with Home Depot, which had $110 billion in 2019 sales versus Lowe's $72 billion.

So how do Costco and Lowe's stack up against each other as stock picks and which is the better buy? 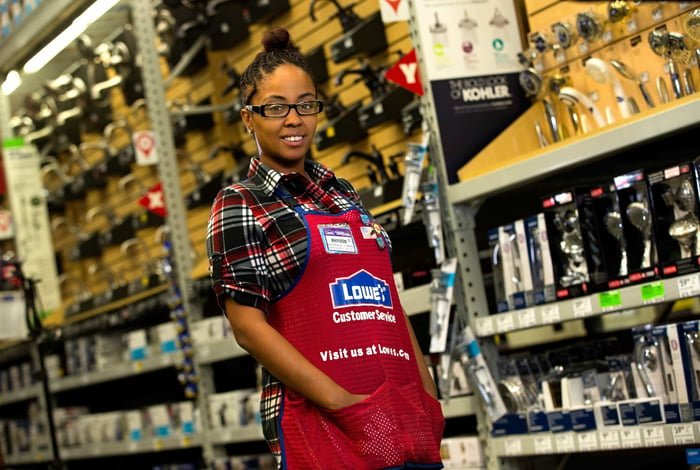 Costco had $38 billion in net sales during the second quarter of 2020, a year-over-year 10.5% increase. It also had an 8.9% increase in comps, numbers that are slightly elevated for a typical financial quarter for the company. While sales soared in February as customers began hoarded goods in anticipation of coronavirus-related lockdowns, the company saw its first comps decline in a decade for the month of April as travel services and other non-essential store segments were closed. The speculation is that this decline is temporary and shouldn't affect Costco much overall as it gradually reopens the closed services and customers make up for any sales lags.

Costco still has room for growth, even in this retail environment. The company reports a 90% member retention rate and is consistently recruiting new members. There were 1 million new customers in the second quarter, including 321,000 executive members, who pay double the standard membership fees for additional shopping perks. This high-margin revenue is significant, amounting to almost a fifth of Costco's total revenue.

So is there any downside? For the business, not really. It's proven itself stable through a pandemic -- excluding the closed divisions and lower gas prices, comps actually increased in April -- and there's ample room to keep expanding. The main concern with buying Costco stock right now is its valuation, which is pretty high and has a trailing-12-month price-to-earnings ratio of 35. While the company has a lot to offer investors, they won't be able to buy its stock at a discount.

Lowe's seems to have the disadvantage of being the smaller home improvement giant in terms of revenue (as compared to Home Depot). But that revenue is growing significantly, especially under the auspices of CEO Marvin Ellison (who took over the role in July 2018). Lowe's main problem is its slow e-commerce growth, and the company is working hard to change that. It's been adding lots of new technology to the store's operations, including an app that tracks how many people are entering and leaving the store premises to maintain proper social distancing.

"Our transformation is ongoing, and our future is bright," Ellison said when he first came on board. "We are confident that we are on the right path to capitalize on solid demand in a healthy home improvement market and generate long-term profitable growth." In the 2019 fourth quarter, there was a modest 2.5% increase in comps, which was impressive, coming almost entirely from physical locations. The company could see explosive growth if it improves in digital.

Since the beginning of stay-at-home orders, stores have remained open, but hours have been scaled back and the company has had to make other modifications. There are short-term problems compounding Lowe's efforts at transformation, but it's been responding to the pandemic effectively, instituting solutions such as curbside pickup at all stores so customers don't even have to come in.

Although Lowe's stock tanked about 50% in March, it has since rebounded to about 10% below its year-to-date high of $126 a share. Lowe's has not released any sales estimates since its last earnings report and it will release its first-quarter 2020 earnings on Wednesday, May 20. But Census Bureau data shows that home improvement sales increased during this period, as people are stuck at home and tackling home projects.

So which is the better buy? I'd have to go with Lowe's. Lowe's has a trailing-12-month P/E ratio of 20 compared to Costco's 35 and Home Depot's 23, which suggests it is trading at a discount to its main rival and to Costco. There's lots of room for Lowe's to grow and it has the right management team and strategy to make that a reality. There are indications that the housing market is still strong and this is the right time for the company to execute on its growth plans.

If you're looking for a secure long-term stock choice, you should consider Costco. But for a better overall buy and a chance for serious growth right now, take a look at Lowe's.