Please ensure Javascript is enabled for purposes of website accessibility
Log In Help Join The Motley Fool
Free Article Join Over 1 Million Premium Members And Get More In-Depth Stock Guidance and Research
By Evan Niu, CFA – May 20, 2020 at 10:00AM

Up until now, Facebook (META -1.69%) has been taking relative baby steps on the path toward e-commerce. Those efforts have primarily been concentrated on Instagram, as that platform naturally lends itself well to shopping due the fundamentally visual nature of the service. Separately, Facebook Marketplace is more of a local classifieds listing service similar to Craigslist than a full-fledged e-commerce platform.

This week, the company announced Facebook Shops, its most significant e-commerce play to date. 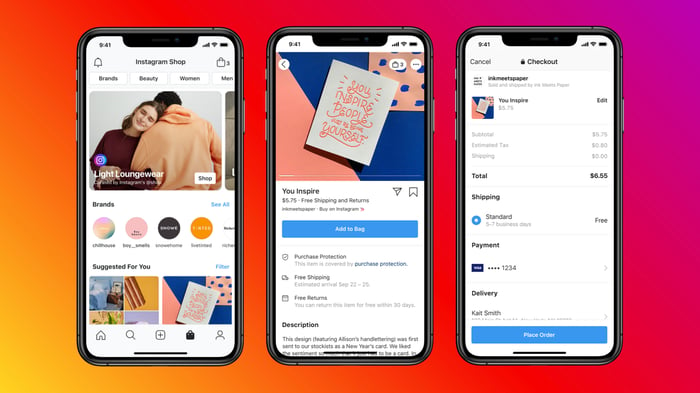 With much of the physical economy grinding to a halt due to the COVID-19 pandemic, many e-commerce companies like Shopify (SHOP 0.67%) have seen a surge in demand as people shift purchasing behavior online. Facebook says it sees an opportunity to help local businesses survive by enabling them to set up shop online. Businesses can use the new offering to create an online storefront on both Facebook and Instagram.

Yesterday, Facebook shared the results of a survey it conducted with small businesses and the figures were dire: 31% of respondents (n = 86,000) have halted operations while 11% expect to close permanently within the next three months if their local economies remain under lockdown.

"As people are being told to stay home, physical storefronts are having a hard time staying open and millions of people are losing their jobs," CEO Mark Zuckerberg wrote in a Facebook post. "I've been personally working with our teams on Facebook Shops every day for the last couple of months so we could accelerate launching it to small businesses who could use tools like this now."

Users can get service and support through Facebook's messaging services like Messenger, WhatsApp, and Instagram Direct, and the company plans to integrate shopping functionalities directly into those platforms at some point "in the future." Facebook is also testing ways to incorporate existing loyalty programs into Shops.

Facebook is partnering with prominent e-commerce players including Shopify and BigCommerce, among others, to help power the backend infrastructure. Businesses can use Facebook Shops for free, and the social networking tech giant will monetize Shops in a couple different ways.

Companies can pay Facebook to run ads for their Shops, and those that utilize Facebook's checkout system will pay a 5% fee for sales of $8 or more (shipments under $8 incur a flat fee of $0.40). Through the end of June, Facebook is waiving selling fees and subsidizing shipping costs due to the coronavirus outbreak. Using Facebook's system removes friction, as customers can complete transactions within the same app without being redirected to a third-party app or site where the user may need to login or provide payment credentials again.

Facebook reassures users that it has designed Shops "with privacy in mind." Transactions will not be shared unless the user chooses to. Aggregated, anonymized information such as traffic will be shared with the business, unless the user grants permission to share personally identifiable information. Still, Facebook has a history of fumbling with privacy safeguards and vowing to do better every time, so a little bit of privacy skepticism is warranted here.

However, Facebook is up front that it will use your Shops activity for ad-targeting purposes. Go figure.