Please ensure Javascript is enabled for purposes of website accessibility
Log In Help Join The Motley Fool
Free Article
Join Nearly 1 Million Premium Members And Get More In-Depth Stock Guidance and Research
By Lawrence Rothman, CFA – May 20, 2020 at 8:00AM

The burger chain has been relying on price increases to boost same-store sales, but that strategy is being tested in the current economic environment.

It is easy to dismiss Shake Shack's (SHAK -0.77%) poor quarterly results, which saw same-store sales (comps) drop 12.8%. Certainly, the coronavirus pandemic played a part with March's comps down 29%. In mid-March, management halted dine-in seating, although restaurants accepted to-go orders. As April dragged on, weekly sales slowly improved, but comps still fell 45% to 64% in the last three weeks of the month.

The coronavirus will eventually pass, and governments are lifting stay-at-home orders. However, there are underlying business issues that suggest Shake Shack's results may not recover as quickly as it hopes. 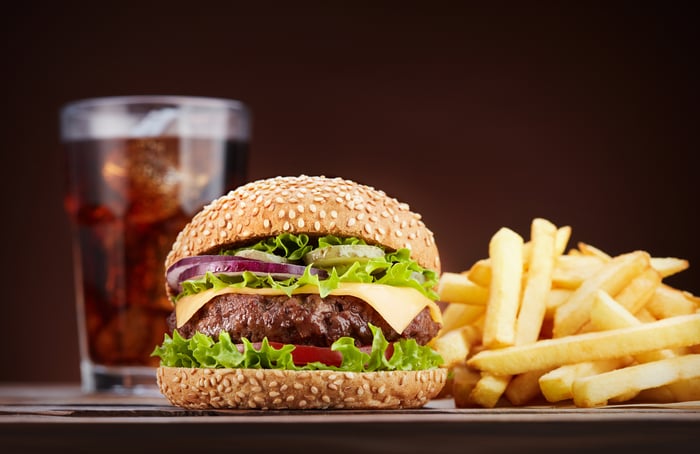 Given the social-distancing practices, it is unsurprising that Shake Shack's first-quarter comps fell 12.8%. Lower restaurant traffic caused a 14.9% drop, although higher prices and a different sales mix offset this by 2.1%.

With COVID-19 wreaking havoc, it is easy to wave this away. However, the company's comps fell 2% in the first two months of the quarter, which was before the virus caused massive disruptions across the United States. Additionally, the company's fourth-quarter comps were down 3.6% with traffic falling 5.4%, but price/mix added 1.8%.

Even at the start of this year, management expected higher prices to provide the major chunk of its anticipated 2020 low-single-digit comps increase. In late February, when it provided the guidance, management expected 1.5% to 2.0% of the gains to come from price increases enacted in December.

Higher prices could indicate strong demand. In that case, it makes sense. But pre-coronavirus results show the company was attracting fewer customers, and management's decision to raise menu prices was propping up comps.

Heading into a difficult economic environment, this presents a further challenge to the company. Shake Shack's initial public offering was in 2015, so there is no data on how the company fared during the last decade's recession. However, in a sluggish economy, people are already less likely to eat out. If Shake Shack continues raising prices when the official unemployment rate is nearly 15%, demand will suffer. While the jobless rate may improve as governments lift stay-at-home orders, no one knows how quickly the economy will recover.

With restaurant traffic already declining heading into the pandemic, it's unclear how Shake Shack will attract more diners as more people can leave their homes.

The company has been pushing delivery, and it has expanded relationships with services like Uber Eats and shipping ready-to-cook meals so people can eat Shake Shack food at home. It also relied more on the digital channel and increased marketing on social media and mobile apps. These steps, while innovative and even necessary during these times, will also hurt profitability.

Adding to the company's woes, on the fiscal first-quarter earnings call earlier this month, CFO Tara Comonte stated: "Over the last month, we've seen significant increases in beef with the largest increase being realized over the most recent week." She went on to explain that Shake Shack has locked-in pricing agreements for chicken and pork, so those are not a major concern at this point.

Beef prices have been rising due to meatpacking closures in the United States. Hopefully, this headwind will pass quickly. Still, while Shake Shack has been addressing costs during this crisis, to the extent it cannot offset the higher beef costs, its other options are to pass along the price increases to customers or accept lower profit margins. Neither is very compelling.

Starting as a hot dog cart in 2001 and opening its first restaurant three years later, the company has grown to 280 locations with approximately one-third of them outside of the United States. This certainly makes Shake Shack a feel-good story. Nonetheless, at this point in time, I wouldn't get caught up in its past success when a rough economy will pressure the company's results.