Please ensure Javascript is enabled for purposes of website accessibility
Log In Help Join The Motley Fool
Free Article Join Over 1 Million Premium Members And Get More In-Depth Stock Guidance and Research
By Rhian Hunt – May 20, 2020 at 6:19PM

Visitors must drive slowly, keep their windows closed, and avoid feeding or touching the animals.

Tigers, giraffes, rhinoceroses, baboons, and many other exotic beasts will soon be available for people cooped up for weeks by coronavirus to view at the Great Adventure animal park in New Jersey, Six Flags (SIX -4.29%) announced in a press release today. The amusement park company will open the gates to its 350-acre animal exhibit on Saturday, May 30, requiring visitors to book advance reservations in order to access the attraction.

Six Flags and other theme park operators have sustained a heavy financial blow from the COVID-19 pandemic. After a months-long shutdown, the company introduced a waitlist for those looking to book future park visits. 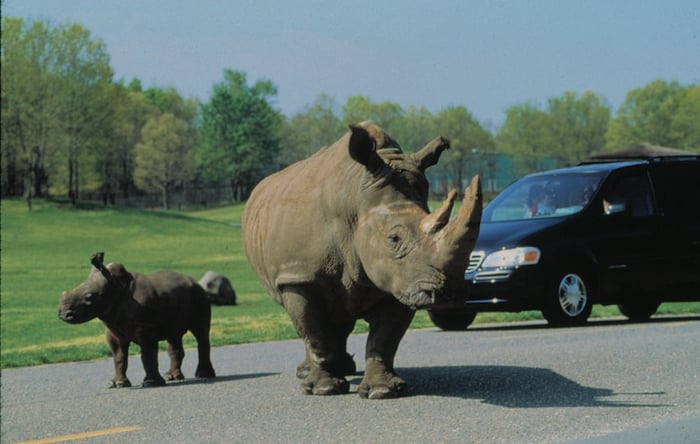 Six Flags intends to open the "Safari" portion of its Great Adventure park to visitors on May 30 while leaving the theme park section with its rides closed. While the safari opened in 1974, in 2013 Six Flags changed the rules, ending the practice of allowing visitors to drive their own vehicles through the animal exhibits. Starting in that year, it began using trucks driven by its employees to transport groups of sightseers instead.

Now, however, personal vehicles are once again the only method of going through the park, allowing people to remain safely inside their own conveyance rather than possibly being exposed to other visitors sick with coronavirus. The park will enforce a strict set of rules to protect both people and animals, including limiting vehicles to cars, SUVs, and empty pickups, a ban on touching the animals, and a 5 mph speed limit.

Six Flags notes "anyone who violates the rules will be ejected from the park without a refund and possibly prosecuted."