Please ensure Javascript is enabled for purposes of website accessibility
Log In Help Join The Motley Fool
Free Article Join Over 1 Million Premium Members And Get More In-Depth Stock Guidance and Research
By Rhian Hunt – May 20, 2020 at 2:35PM

COVID-19 benefited the retailer’s bottom line in Asia, too.

At a townhall meeting today, Walmart (WMT -0.65%) told attending staff it plans to greatly increase its Sam's Club footprint in China, raising the number of stores there from the current 26 to 100. The sources indicated the nearly 285% increase will happen over an eight-year timeframe, with strong performance in the Chinese market providing the company an incentive to expand its presence there.

The news comes shortly after a powerful showing in Walmart's fiscal first-quarter 2021 earnings report, released yesterday for the quarter ended May 1. The coronavirus drove sales making the retailer's comps soar 10%, while e-commerce popped 74% and the typical customer spent 16.5% more, among other highly favorable metrics. 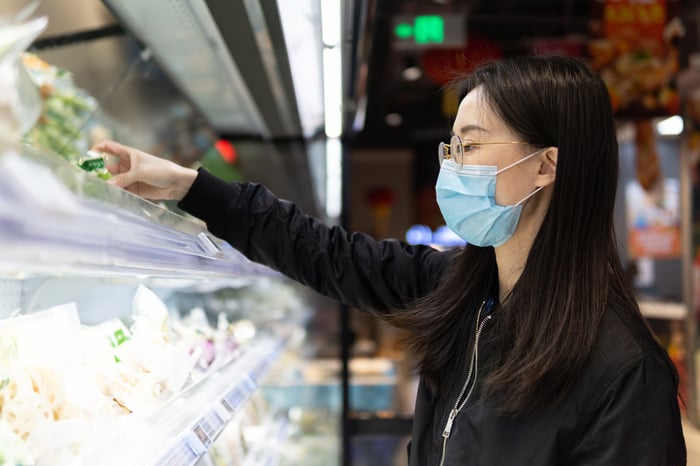 Sam's Club in China is a moderately upscale retail outlet, not a warehouse club like its American namesake. According to Walmart China, Sam's Club is "a chain of high end membership-only clubs" that offers top quality imported food, appliances, and clothing. The brand caters to China's growing middle class, and is often the destination for weekend shopping trips.

While comparable store sales grew by 11.7% in China overall year over year for the quarter closing at the end of April, Sam's Club sales soared faster than the grocery sales at the country's 400 Walmarts. The pandemic drove strong food sales in China, much as it has in the United States, prompting Walmart China to temporarily add approximately 15,000 part-time workers to its payroll to meet customer demand.

Shares of Walmart are trading up so far today following its stellar Q1 results.