Please ensure Javascript is enabled for purposes of website accessibility
Log In Help Join The Motley Fool
Free Article Join Over 1 Million Premium Members And Get More In-Depth Stock Guidance and Research
By Jim Crumly – May 21, 2020 at 6:12AM

Here's why the leading surgical robot company -- and its stock -- will do well in a post-pandemic world.

Among the many things that have been thrown out of whack by the COVID-19 pandemic is routine medical care. The Centers for Disease Control and Prevention published a framework for the delivery of medical services during the pandemic, recommending that "healthcare systems prioritize urgent visits and delay elective care to mitigate the spread of COVID-19 in healthcare settings."

Based on that, the stocks of many companies in the healthcare sector started looking ill almost immediately, and earnings reports from the first quarter have generally confirmed the damage done to sales and profits by the sharp decline in many types of medical procedures.

Intuitive Surgical (ISRG -1.83%) is the leading seller of surgical robots, but since the company gets most of its revenue from disposable instruments and supplies whenever its da Vinci robotic systems are used in a procedure, the pause in elective surgery is taking a particularly heavy toll on its business. However, it should bounce back more strongly than most once those delayed surgeries can be scheduled and hospitals deal with the backlog.

The results from the first quarter showed the impact of a healthcare industry that pivoted away from routine procedures in mid-March. The company said its business was performing at the high end of its expectations for the first two and a half months of the quarter, but crashed in the last two weeks of March. Procedures per week in the U.S. fell 65% compared with earlier in the quarter. 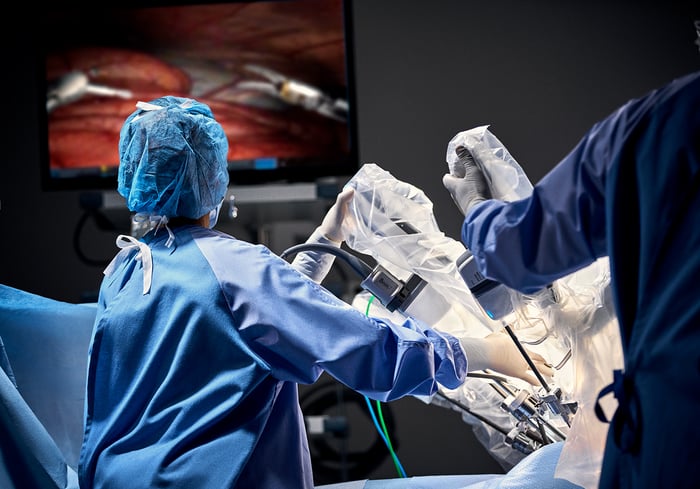 How good was business before the pandemic hit? In 2019, total procedures grew 18%, matching the growth rate in 2018. Domestic procedures grew 17% and were up 21% outside the U.S. The number of installed da Vinci systems grew 12%, the number of procedures per system grew 6%, and the average consumable revenue per procedure increased 5%. These compounding factors along with increasing system sales translated into top-line growth of 20% last year, with adjusted earnings per share rising 16% to $12.76.

Recovery will be quick

Intuitive isn't giving guidance due to the uncertainty caused by the COVID-19 pandemic, but it's likely that Q2 results will be down considerably. Analysts are forecasting Q2 revenue of $950 million, which would be a decline of 14% sequentially and 19% year over year. But the company's rebound from that tumble may be stronger and faster than people think.

States are already giving healthcare providers the green light to begin performing elective procedures again, even in some of the areas hardest-hit by the pandemic like New Jersey, New York's Nassau County, and Seattle. The availability of personal protective equipment and hospital capacity has improved, and initial fears that healthcare systems would be overwhelmed by coronavirus patients have eased.

Intuitive Surgical is positioned better for a rebound than some medical equipment companies because its robots are used for treating serious conditions that aren't easily resolved by non-surgical means. As the company said in its conference call in April, elective surgery does not mean optional surgery. Medical procedures that were put off during the crisis will still need to be done before too long, and the backlog of patients requiring them is growing. June should see the beginning of a surge of operations as hospitals try to catch up.

Going forward, hospitals may be challenged in dealing with the large backlog of delayed-but-necessary surgical procedures. Intuitive said it's well-positioned with inventory to meet the looming increasing demand. In fact, the advantages of robotic surgery should become more obvious in the coming weeks, as da Vinci patients have shorter recovery times and the surgeries are often outpatient procedures, which put less strain on hospital capacity.

A compelling story in the long term

The COVID-19 pandemic should only create a temporary perturbation to Intuitive Surgical's business, and the company should bounce back quickly. But to look at the stock only from the standpoint of the impact of the current crisis would be to overlook the long-term strengths of the company.

Robotic surgery is a powerful trend, and its adoption across the world is still in the early days. In the U.S., procedure growth and system sales growth are driven in part by the development of new applications for the technology, such as gall bladder surgery, hernia repair, and colorectal procedures. General surgery procedures like these increased 29% last year and now almost equal the procedure volume on da Vinci systems from earlier uses in gynecology and urology. Outside the U.S., the company is penetrating high-growth markets in Asia and Europe where da Vinci usage is just beginning to expand beyond urology.

Competitors are moving into the field, but the company has built a huge moat with its first-mover advantage. More than 21,000 peer-reviewed articles have been published about the company's products and more than 50 clinical trials involving da Vinci procedures are underway, many of which will open up new uses for the robots. The company's extensive investments in sales, training, and service organizations will be difficult to replicate by new entrants as well.

But probably the biggest factor for investors to consider is that the company has a tremendous capacity to innovate. In 2019, Intuitive spent $557 million on research and development, a 33% increase from the year before, and 12% of revenue, compared with 11% in 2018 and 10% in 2017. New products introduced in recent months include a single-port version of da Vinci, which is used for procedures conducted through a single incision or through the mouth, the Ion system for taking lung biopsies, and new tools for stapling, transection, endoscopy, and 3D imaging.

A stock for the post-pandemic world

The impact from delays in elective surgery will impact Intuitive's second-quarter results, which are to be reported in late July, but the market is already looking past the immediate effect as a rapid recovery could have already begun. Shares are up 53% since taking a huge dive in late February and March. But the stock remains 11% below the all-time high set in February and is still cheaper on a price/earnings basis than it was all through 2018 and 2019.

The long-term trends are intact for Intuitive Surgical, and for growth investors looking for companies that can thrive in the post-coronavirus era, the shares are a buy.