Please ensure Javascript is enabled for purposes of website accessibility
Log In Help Join The Motley Fool
Free Article Join Over 1 Million Premium Members And Get More In-Depth Stock Guidance and Research
By Keith Speights - Updated May 21, 2020 at 4:21PM

There's bad news, good news, and more bad news for Medtronic (MDT -0.14%). The first bad news is that the medical device maker's shares were down 14% year to date as of the close on Wednesday. The good news is that it had been much worse: Medtronic stock plunged close to 40% in March.

What's the other bad news? The company announced its fourth-quarter and fiscal 2020 full-year results before the market opened on Thursday. And those results weren't great. Here are the highlights from Medtronic's Q4 update. 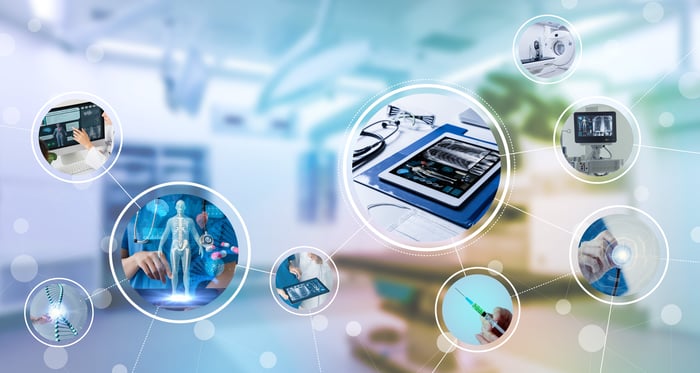 Medtronic's top-line performance went in the wrong direction in the fourth quarter, which ended on April 24, 2020. Revenue fell 26% year over year to $6 billion. Analysts were expecting that the company's revenue for the fourth quarter would be a little over $7 billion.

The medical device giant reported Q4 net income of $640 million, or $0.48 per share, based on generally accepted accounting principles (GAAP). This reflected a sharp decline from the GAAP earnings of $1.2 billion, or $0.87 per share, in the prior-year period.

There was one culprit behind all of Medtronic's bad news in the fourth quarter: the COVID-19 pandemic. But it wasn't just Medtronic feeling the pain; the entire medical technology industry suffered as non-urgent procedures were pushed back due to the coronavirus outbreak.

Medtronic's cardiac and vascular group took the hardest hit. Fourth-quarter revenue for the unit plunged 34% year over year to a little over $2 billion. The company's restorative therapies group was also hammered by the COVID-19 pandemic. The group's Q4 revenue sank 33% year over year, with even higher declines for specialty therapies and pain therapies.

Relatively speaking, Medtronic's diabetes group performed much better. However, revenue for the group still fell 9% year over year to $570 million. With physician offices closing due to the pandemic, fewer patients started using insulin pumps sold by the diabetes group. This was offset partially, though, by increased demand for diabetes supplies, especially in international markets.

Like many companies in the healthcare sector, Medtronic opted to not provide any guidance for its next quarter or for the full year. There's simply too much uncertainty related to the current healthcare crisis.

However, shareholders do have something positive to look forward to. Medtronic announced an increase in its dividend, marking its 43rd consecutive year of dividend hikes. The dividend will be paid on July 17, 2020, to shareholders of record at the close of business on June 26, 2020.