Please ensure Javascript is enabled for purposes of website accessibility
Log In Help Join The Motley Fool
Free Article Join Over 1 Million Premium Members And Get More In-Depth Stock Guidance and Research
By Jeremy Bowman – Updated May 21, 2020 at 12:11PM

Shares of the fine-dining chain fell on a secondary stock offering.

Shares of Ruth's Hospitality Group (RUTH 5.45%) were heading lower today after the fine-dining company announced a secondary stock offering that would dilute shareholders. The stock was down 11.6% as of 10:18 a.m. EDT on Thursday.

The parent of Ruth's Chris Steak House said that it would sell $43.5 million in common stock to Jefferies, which would in turn sell it to the general public. Jefferies also has the right to purchase an additional $6.525 million in shares.

Ruth's Hospitality plans to use the proceeds to repay borrowings under its existing credit agreements and strengthen its balance sheet in response to the impact of the COVID-19 pandemic. 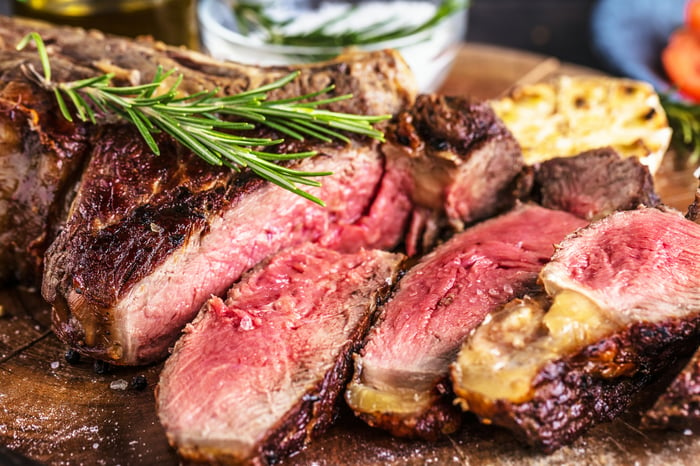 After today's stock drop, Ruth's Hospitality has a market cap of $223 million, meaning the secondary offering will dilute current shareholders by approximately 20%.

The company has tapped multiple resources to shore up its liquidity, including increasing its borrowing capacity under an existing credit agreement by $150 million and reducing rent payments. Ruth's had borrowed $20 million from the federal government under the Paycheck Protection Program, but returned it over controversy about publicly traded companies taking money meant for small business.

As a fine-dining chain, Ruth's Hospitality is one of the most threatened restaurant businesses. Fast-food and casual-dining companies are better able to provide takeout and delivery services while dining rooms are closed across much of the country by the pandemic. In April, comparable sales at company-owned restaurants that stayed open were down 83.5%.

The secondary offering is a reminder that Ruth's is still in a cash crunch; it said it would have had a cash burn rate of $2.4 million a week in April if it paid landlords in full. Dining rooms are now open in 11 of its restaurants as states have begun to reopen their economies, but there's no guarantee that customers will come back, until they feel safe. The company, which also owns the Mitchell's Fish Market chain, still has long road to recovery.

This Beaten Down Stock Could Serve Up Prime Returns