Please ensure Javascript is enabled for purposes of website accessibility
Log In Help Join The Motley Fool
Free Article Join Over 1 Million Premium Members And Get More In-Depth Stock Guidance and Research
By Prosper Junior Bakiny – Updated May 22, 2020 at 4:24PM

These two pharma companies have outpaced the market so far this year, but which one will perform better moving forward?

The COVID-19 pandemic has spared few companies, but AbbVie (ABBV -5.96%) and Eli Lilly (LLY -2.02%) are two pharma giants whose businesses are thriving amid the ongoing crisis. Both drugmakers have also performed better than the broader market of late. Year to date, shares of AbbVie are up by 3.2%, while Eli Lilly's stock is up by 17.8%. By contrast, the S&P 500 is down by about 8% since the year started. Both AbbVie and Eli Lilly could continue to outperform the market moving forward, but which of these two pharma stocks is the better buy today? 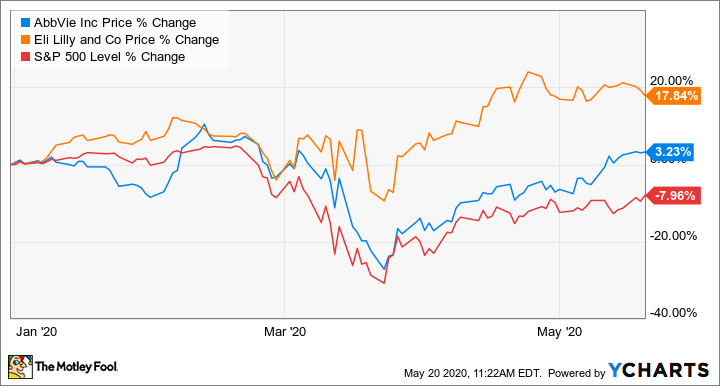 Despite its sales losing steam in Europe due to competition from biosimilars, AbbVie's Humira remains a blockbuster drug. The immunosuppressant will likely continue to account for a notable share of AbbVie's top line for a little while longer. In the meantime, the pharma giant can count on other products to pick up some of Humira's losses. For instance, there's cancer drug Imbruvica, whose sales for the first quarter increased by 37.9% to $1.2 billion.

There's also Skyrizi, a treatment for plaque psoriasis that was approved by the U.S. Food and Drug Administration (FDA) in April 2019. During the first quarter, Skyrizi generated $300 million in revenue, representing a 38.9% sequential increase. AbbVie can also count on cancer drug Venclexta, whose revenue during the first quarter was $317 million, 109.9% higher than the prior-year quarter.

Furthermore, let's not forget that AbbVie recently closed its much-anticipated acquisition of Allergan. This deal cost AbbVie about $63 billion, and in return, the pharma company picked up several products that should help bolster its lineup and its pipeline.

Most notably, there's Botox, a product capable of generating several billion dollars in sales every year and for which there are currently no biosimilars. AbbVie also thinks it is extremely unlikely that there will be a biosimilar for Botox anytime soon. With an even stronger lineup of products, AbbVie should continue to grow its revenue and earnings at a good clip from here on out.

Eli Lilly is one of the biggest players in the market for diabetes drugs in the U.S. The company markets products including Trulicity, Humulin, Humalog, Basaglar, and others. Eli Lilly's lineup of diabetes products was one of the major reasons the company was able to deliver a strong performance during the first quarter. The pharma giant's revenue of $5.9 billion in the quarter increased by 15% year over year, while its non-GAAP net income increased by 29% to $1.6 billion. 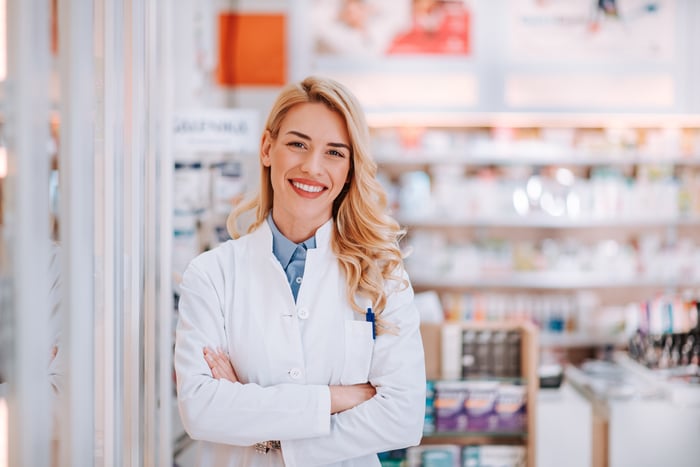 Outside of its diabetes lineup, Eli Lilly does have other exciting products. Some of the most promising include Olumiant, a treatment for rheumatoid arthritis, cancer treatment Alimta, and an immunosuppressant called Taltz. Sales for all three products have been growing rapidly of late. During the first quarter, Olumiant's revenue grew by 70% to $139.7 million. Meanwhile, Alimta recorded $560.1 million in revenue -- representing 12% year-over-year growth -- while Taltz's revenue was $443.5 million, 76% higher than the year-ago period.

Lastly, Eli Lilly boasts a rich pipeline of potential products, many of which are in late-stage trials. Thanks to its robust pipeline, the company can continue to replenish and strengthen its lineup.

It might be tempting to crown AbbVie the runaway winner in this contest. After all, AbbVie's revenue of $8.6 billion during the first quarter -- and its non-GAAP earnings per share (EPS) of $2.42 -- compare favorably to Eli Lilly's revenue of $5.9 billion and non-GAAP EPS of $1.75. The gap between the two companies' revenue and earnings will likely increase now that AbbVie has completed its acquisition of Allergan. Furthermore, AbbVie's forward price-to-earnings (P/E) ratio of 8.7 looks more attractive than Eli Lilly's forward P/E of 22.7.

Lastly, AbbVie sports a much juicier dividend yield -- currently about 4.9%, compared with a yield of 1.8% for Eli Lilly. Note that the average dividend yield for the S&P 500 is about 2.1%. With that said, there may be one major reason to prefer Eli Lilly over AbbVie at the moment: AbbVie's recent acquisition of Allergan did not do any favors to its balance sheet. AbbVie's debt-to-assets ratio of 76.9% is woefully high, while Eli Lilly's 40.7% looks much better.

AbbVie has pledged to pay down much of the debt it incurred as a result of its pricey acquisition as quickly as possible. "The robust cash flow generation of the combined company will be used to rapidly pay down debt, support a strong and growing dividend and pursue additional innovative mid-to-late stage pipeline assets. We have committed to paying down $15 billion to $18 billion of combined company debt by the end of 2021, of which nearly $7 billion will be repaid by the end of May 2020," said AbbVie's CFO, Robert Michael.

Even with Michael's caveat, investors should think long and hard about AbbVie's balance sheet before pulling the trigger. While I do believe the pharma giant remains a buy, I think Eli Lilly is the better pick right now because of AbbVie's significantly higher debt level. AbbVie will become even more attractive if the company keeps its promise to reduce its debt.