Please ensure Javascript is enabled for purposes of website accessibility
Log In Help Join The Motley Fool
Free Article Join Over 1 Million Premium Members And Get More In-Depth Stock Guidance and Research
By Lee Samaha - May 23, 2020 at 7:32AM

An investment appraisal of the elevator company, formerly part of United Technologies.

In the maelstrom of the COVID-19 pandemic, many investors would have missed the fact that three new industrial companies were created out of the former United Technologies business. Having already looked at Raytheon Technologies (a merger of UTC's aerospace businesses and Raytheon Company), and heating, ventilation, and air conditioning company Carrier (spun out of UTC), it's time to turn attention to another UTS spinout, Otis (OTIS -0.23%). What's the investment case for the stock, and is it a good value? 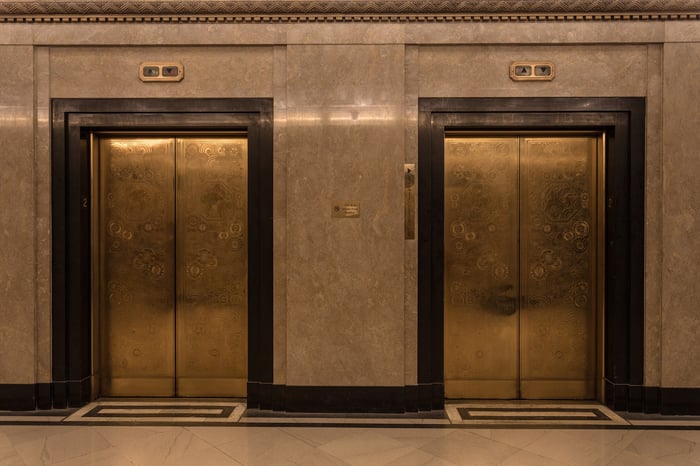 As the world's leading escalator and elevator company, Otis is a play on:

To illustrate the first point, you only have to look at a chart of regional sales for Otis and its key rival, Finland's KONE (OTC: KNYJY). For an idea of how important China is, consider that it contributes roughly 30% of KONE's overall sales, with the next country, the U.S., a distant second around 15%. In fact, China contributes 63% of the global new equipment market at present.

China is the key

Not only is China the key country in the elevator market right now, but it's also the growth engine for the future, particularly in terms of service demand. Otis generates 57% of its sales from service and the rest from new equipment. However, the fact that Otis service revenue comes with a 21.4% margin compared to new equipment's 7.1% margin (both figures from 2019) means Otis generates 80% of its profit from service revenue.

Furthermore, consider that, in the Americas and Europe, Middle East and Africa, Otis generates around two-thirds of its revenue from service, but only 44% from service in China. It's obvious that the key to growth potential is expanding new equipment sales in China in order to generate service revenue down the line. 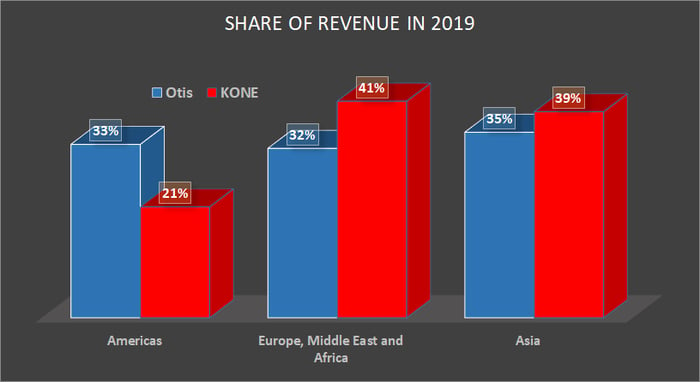 In addition to driving future service growth in China via selling new equipment into the market, Otis also has an opportunity to increase service growth (in China and elsewhere) by grabbing market share in a highly fragmented service industry. Otis is trying to differentiate itself from the competition by using Internet of Things (IoT)-based solutions such as remote monitoring through web-enabled devices embedded in elevators. In this way, Otis can predict when an elevator needs servicing and respond immediately.

In addition, Otis's technicians are being armed with productivity tools such as mobile devices with applications, so its technicians can immediately identify the issue with the elevator and start to order repair parts for it through the app. As such, Otis should be able to grab market share from the myriad independent service providers it competes with.

What about the coronavirus pandemic?

While the long-term opportunities look good, the reality is that the COVID-19 pandemic has negatively affected the industrial company's prospects in the near term. The best way to see this is by looking at the change in management's full-year 2020 outlook given in the recent first-quarter earnings presentations.

In common with many other industrial companies, Otis sees a bottom forming in the second quarter with a gradual recovery to come as Europe and the U.S. follow China in opening up the economy.

Is Otis a buy?

On the plus side, management affirmed during the earnings call that the new equipment market was recovering in China in the second quarter. In addition, the estimate for free cash flow in 2020 puts the stock on 23 times free cash flow for 2020. That's not a bad valuation for a stock in a highly unusual trough year.

The key question is what the global construction market -- non-single family home residential buildings make up half of Otis's revenue -- will look like in a few years time. Investors also need to consider any possible ramifications for Otis given an escalation in the trade conflict. In this context, Otis is probably fairly valued right now, and that won't make it a buy for most investors.