Please ensure Javascript is enabled for purposes of website accessibility
Log In Help Join The Motley Fool
Free Article Join Over 1 Million Premium Members And Get More In-Depth Stock Guidance and Research
By Alex Carchidi – May 24, 2020 at 8:16AM

Its lack of vaccine-development success stories makes its prospects for a COVID-19 vaccine dubious, but there are positive signs for investors.

Novavax (NVAX 1.88%) is developing a COVID-19 vaccine candidate, and recent spikes in its stock price and trading volume indicate that investors suspect such a treatment could give the company another chance at life.

Novavax is far from a healthy business, however. The company's vaccine trials in 2016 and 2019 ended in embarrassing and costly late-stage failures due to a lack of clinical efficacy, and it's never successfully brought a product to market. 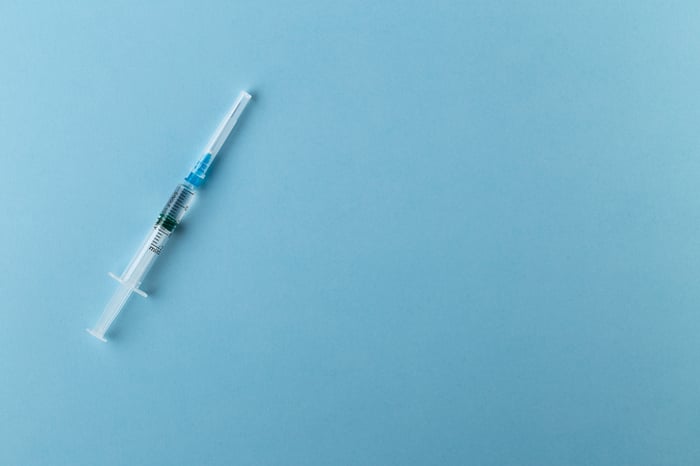 With each failure, Novavax sustained severe losses that required large reductions in its workforce and fixed capital. These reductions have taken a toll on the company's ability to start new collaborations and to credibly develop new products. Things have started to look increasingly dire for Novavax -- in the past 12 months, it generated just $18.7 million in revenue, against a cash outflow of $136.6 million. 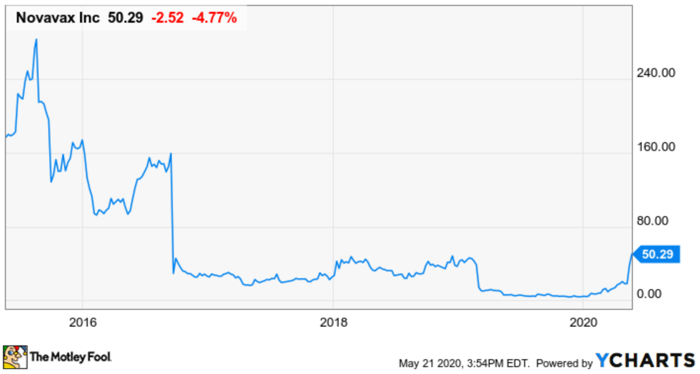 Nonetheless, many think the company still has a role to play in fighting the pandemic, as shown by a recent infusion of $388 million provided by the Coalition for Epidemic Preparedness Innovations to support Novavax's development of a COVID-19 vaccine.

With its cash flow issues solved for the moment, Novavax has breathing room to work on what might become a blockbuster vaccine. But its prior clinical-trial failures raise the question of whether the company is positioned to succeed. Given Novavax's turbulent history, what should the market expect from its COVID-19 vaccine development efforts?

Could things be different for Novavax this time around?

In a nutshell, Novavax is likely on the verge of a vibrant recovery. In January, the Food and Drug Administration awarded Novavax a Fast Track designation for its NanoFlu vaccine, targeted at senior citizens, which is currently concluding its phase 3 clinical trials. This means that the FDA was pleased with the preliminary data reported by Novavax, boding well for the vaccine candidate's chances of approval.

At a minimum, successfully moving forward with NanoFlu will give Novavax the recurring revenues it needs to survive even if its COVID-19 vaccine candidate doesn't pan out. More importantly, if NanoFlu is approved in mid-2020, it will give Novavax the wider scientific validation it needs for its centerpiece vaccine-adjuvant development technology. An adjuvant is an ingredient added to a vaccine to increase immune response, and Novavax's Matrix-M vaccine-adjuvant platform is a scientifically plausible, yet so far clinically unproven, methodology for increasing the strength of the immune system's response to vaccines.

The Matrix-M platform rests at the core of any competitive advantage that Novavax can claim relative to larger and more experienced vaccine developers. In its release of preliminary clinical trial data for NanoFlu, Novavax claimed that the Matrix-M system was responsible for its vaccine performing more strongly than the industry-standard flu vaccine, Sanofi's (SNY 0.90%) Fluzone. If Novavax can beat Sanofi's benchmark flu vaccine, it will give the market confidence that the company's COVID-19 vaccine candidate is less likely to fail in the later phases of clinical trials.

Get in before the hype

At the moment, the specter of Novavax's past failures is less relevant to its future than its current efforts are.

For the most risk-tolerant healthcare investors, Novavax warrants a buy as soon as possible. The company has massive upsides in the short term, as a result of its imminent NanoFlu approval and the likely success of its COVID-19 vaccine candidate in phase 1 trials. Separately, while there's no guarantee that Novavax will find a way to salvage its older vaccine candidates that failed in phase 3, its stock will likely rise more rapidly if it does.

For more risk-averse investors, it may be tempting to jump into a Novavax position if it reports positive results from its phase 1 clinical trials in July. Keep in mind that Novavax's prior vaccine candidates failed in phases 2 and 3, not in phase 1, and that vaccines are less likely to fail early than other pharmaceutical products. If Novavax does successfully develop a COVID-19 vaccine, it'll be on a strong long-term trajectory, so buying in after phase 3 concludes might be a better idea.