Please ensure Javascript is enabled for purposes of website accessibility
Log In Help Join The Motley Fool
Free Article Join Over 1 Million Premium Members And Get More In-Depth Stock Guidance and Research
By Rhian Hunt – May 26, 2020 at 11:22AM

Turning its attention to the "fried chicken sandwich wars," Yum! Brands (YUM 0.40%) subsidiary KFC will start testing an upgraded chicken sandwich today in Orlando, Florida. The bigger, better chicken offering costs $3.99 and will be available until June 21, or until the last of the trial run is sold.

The opening shot of the war was fired last August, when Restaurant Brands International (QSR -1.05%) brand Popeyes Louisiana Kitchen responded to a promotional tweet from then market leader Chick-Fil-A with a two-word challenge: "...y'all good?" 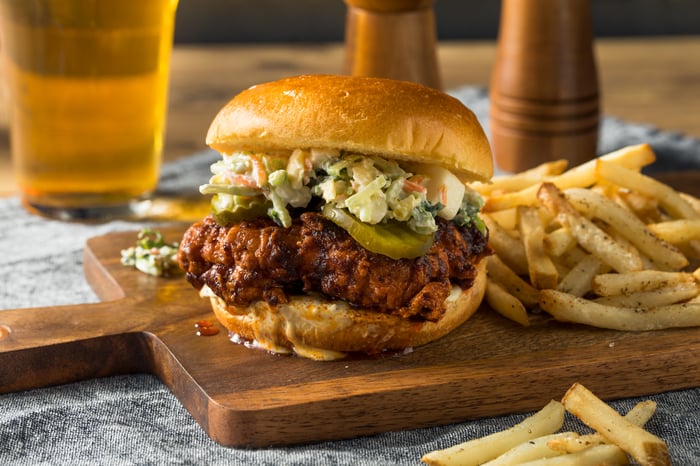 This kicked off a scramble in which most major U.S. fast food chains competed to claim chicken sandwich supremacy. The resulting competition temporarily depleted America's supply of small chickens, whose breast meat is ideally sized to fit into a typical chicken sandwich with minimal preparation such as trimming.

The coronavirus pandemic put a damper on the chicken sandwich wars, which echoed Americans' steadily increasing demand for chicken. Now, the war may be going hot again with KFC's effort to improve its position relative to its rivals.

The new chicken item features a 20% larger filet, according to KFC, along with a bun and condiments similar to Popeyes' offerings. KFC's Chief Marketing Officer Andrea Zahumensky says the chain's food innovation team "left no stone unturned." "They tested pickles with eight variations of thickness and brines before we landed on our pickle," she said. "And for our perfect brioche bun, we collaborated with six different bakeries and tested more than ten formula revisions."