Please ensure Javascript is enabled for purposes of website accessibility
Log In Help Join The Motley Fool
Free Article Join Over 1 Million Premium Members And Get More In-Depth Stock Guidance and Research
By Donna Fuscaldo – Updated May 26, 2020 at 3:46PM

The streaming service lifts its 10,000-song cap after years of customer requests.

Spotify (SPOT 0.78%) the music streaming service, is removing the limits it has in place for the number of songs that can be saved.

In an update on its community page, the tech stock said it began rolling out an unlimited library, which means the sky's the limit in terms of how many songs users can save. 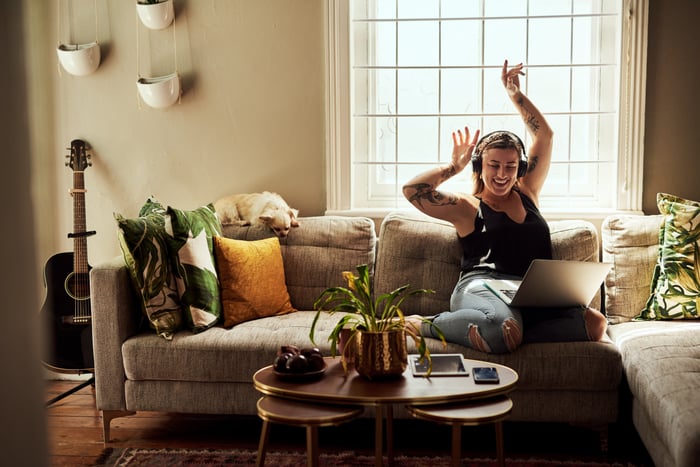 Previously Spotify capped its save limit at 10,000 songs. After that, users would see a message prompting them to remove songs or albums to free up space to save more. Getting rid of the cap has been a popular request since 2014, with more than 12,500 votes in the company's Community Ideas Exchange. The music streaming company didn't say why it made the change now. Spotify is keeping the cap at 10,000 songs for playlists and downloads to play when users are offline. The company said it's rolling out the update and it may be a little while before the limit message doesn't pop up anymore.

Removing the cap on songs Spotify customers can play isn't the only news the streaming service released in recent days. Last week shares surged after it signed Joe Rogan, a popular podcast host, in an exclusive licensing deal that covers multiple years. The Joe Rogan Experience is among the most downloaded podcasts worldwide.

In late April, Spotify reported first-quarter results in which monthly active users jumped 31% to 286 million. It has 130 million paid subscribers at the end of the first quarter. Spotify said at the time that despite some changes in listening patterns brought on by the COVID-19 pandemic, it remains "optimistic about the underlying growth fundamentals of the business."