Please ensure Javascript is enabled for purposes of website accessibility
Log In Help Join The Motley Fool
Free Article Join Over 1 Million Premium Members And Get More In-Depth Stock Guidance and Research
By Donna Fuscaldo – May 26, 2020 at 3:27PM

Tencent is focusing on a bevy of tech areas, including cloud, AI, blockchain, and 5G.

Tencent (TCEHY -1.31%), the Chinese technology company behind popular messaging app WeChat, is gearing up to spend $70 billion over the next five yeas on technology infrastructure in an effort to diversify its business.

With internet growth slowing in China and with companies moving more of their data to the cloud, Tencent is looking to expand beyond messaging and internet games. That's not to say both areas haven't seen a boon since the COVID-19 pandemic started. With stay-at-home orders in place earlier in the year in China and other parts of Asia, Tencent's online gaming sales jumped 31% year-over-year in the first quarter, while WeChat monthly active users increased 8.2% to 1.2 billion. 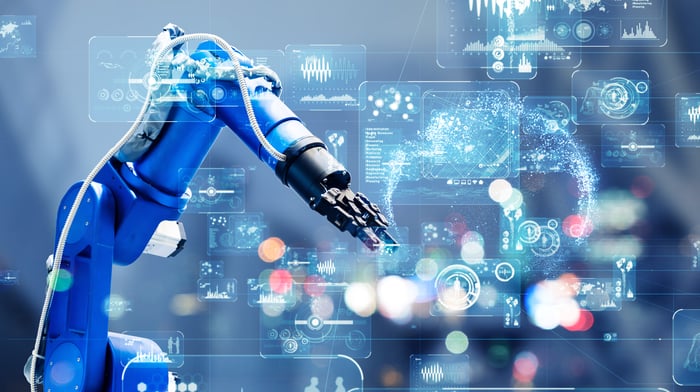 Dowson Tong, senior executive vice president of Tencent, said in a state media interview covered by Reuters the 500 billion yuan investment will happen over the next five years and will focus on a bevy of areas including cloud computing, artificial intelligence, blockchain, cybersecurity, big data, 5G, and supercomputers. The move is part of China's push to enhance the economy via new technology infrastructures and cloud-based computing.

Tong acknowledged the cloud industry in China has seen business slow because of the COVID-19 pandemic, but Tencent still expects businesses and the public sector to embrace the cloud over the long run.

Tencent isn't the only Chinese tech stock going after the cloud market in a much bigger way. In late April, Alibaba, the Chinese e-commerce giant, said it plans to invest 200 billion yuan, or about $28 billion, in its cloud computing efforts. The investments will take place over the course of three years. Alibaba's cloud business is currently ahead of Tencent's in China, with 46.4% market share as of the end of 2019 compared to Tencent's 18%, according to market research firm Canalys.

Donna Fuscaldo has no position in any of the stocks mentioned. The Motley Fool owns shares of and recommends Alibaba Group Holding Ltd. and Tencent Holdings. The Motley Fool has a disclosure policy.