Please ensure Javascript is enabled for purposes of website accessibility
Log In Help Join The Motley Fool
Free Article Join Over 1 Million Premium Members And Get More In-Depth Stock Guidance and Research
By Billy Duberstein – May 14, 2020 at 10:08AM

The Chinese internet giant didn’t miss a beat in the first quarter, even as much of China was locked down.

Stay-at-home orders are hurting economies all over the world, but they are actually leading to a demand surge for those companies that cater to the new normal. One of the biggest stay-at-home stocks in the entire world is Chinese internet giant Tencent (TCEHY 4.47%). Tencent has an array of internet products across online gaming, social media, video and music streaming services, electronic payments, and cloud computing.

Tencent just reported its results from the first quarter of 2020, a period during which the majority of China was locked down due to the coronavirus. Yet Tencent's main businesses showed resilient results -- if not better -- even amid nationwide stay-at-home orders. In response, the stock rose nearly 4.5% yesterday on an otherwise down day for the markets, showing that Tencent still remains one of the safer businesses in the world right now. 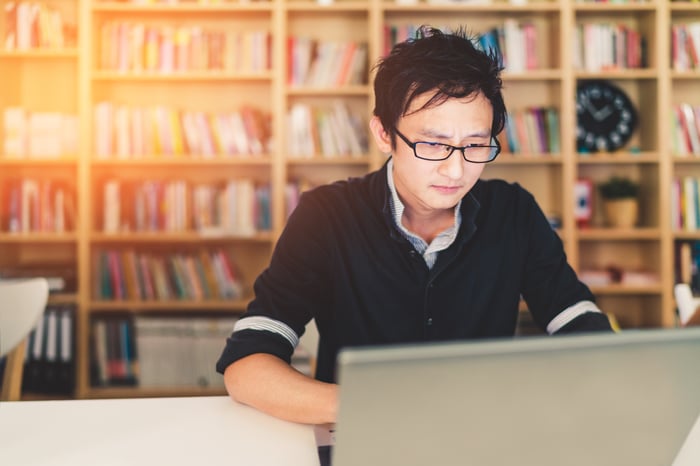 During the quarter, Tencent as a whole grew revenue 26%, with non-IFRS (adjusted) operating profit growing 25% and non-IFRS net profit up 29%. The bright spots fueling Tencent's growth were its online gaming empire and its dominant WeChat social media platform. Online gaming revenue grew 31%, an acceleration over the prior quarter's 25% growth.

While the company noted online gaming may "normalize" as more and more Chinese consumers go back to work outside the home, management did note in the release that it "also believe[s] that games have structurally expanded their long-term audiences and appeal." That means there could be some above-average growth in this segment going forward, even if people begin to venture outside their homes more and more.

Incredibly, WeChat's social media advertising segment grew a whopping 47% in the quarter, accelerating over the 37% growth in the fourth quarter, due to increased inventory from Weixin Moments, the Chinese equivalent of Facebook's (META 1.21%) news feed.

Social media advertising was impressive during a time when advertisers were no doubt looking to pull back on spending, revealing the value of the WeChat platform and its best-in-class return on investment for advertisers. Management also touted success in its ad networks business, which targets ads not just on WeChat but other sites across China's internet.

If there was one thing to be wary of in games and WeChat, it's that management noted there could be a slowdown ahead as the economy begins to open up. That could lead to lower usage, combined with restrained global brand advertiser budgets due to the economic slowdown. Still, these are great businesses, though they may have gotten a bigger bump than usual in the first quarter with people stuck at home.

Headwinds in the quarter: fintech and cloud

While Tencent's "traditional" businesses accelerated, its newer growth segments in payments and cloud computing were affected by the slowdown. Payments slowed down as customers were cautious about purchases during the lockdown. Although Tencent Pay is an electronic payments platform, it's also widely used outside of the home as well. As such, lower overall payment activity curbed TenPay revenue.

The company also noted a sequential decline in cloud, as new project deployments and customer acquisition effectively halted during the quarter. However, management noted a few bright spots, most notably Tencent Meeting -- the company's equivalent of Zoom Video (ZM 4.87%) -- which became a breakout success as the new leading video conference app in China. The company also began expanding Tencent Meeting internationally under the brand Voov.

It's unclear if Tencent is actually monetizing Tencent Meeting yet -- judging from the relatively lackluster growth in this segment, likely not; however, soaring usage bodes well for the long-term future of Tencent's cloud and business services segment.

Despite these headwinds, the fintech & business services segment as a whole grew 22% year over year, a big step down from the 39% growth in Q4, but certainly not terrible during a lockdown, either. Even better, management noted a recovery in commercial transactions in the current quarter, which had already returned to "late 2019 levels" by the end of April.

Therefore, there could be some mean reversion ahead, where the red-hot gaming and social media business slows down, while payments and cloud reaccelerate.

A stock to hold for the long-term

Though the scandal at Luckin Coffee (LKNC.Y 2.65%) has made some investors wary of all Chinese stocks, Tencent is a true blue chip stock of China. Tencent's management is proven over a long period, and the company has the financial heft, diversity, and scale to be safe, and enough avenues for growth to be a compelling growth stock as well. That combination of offensive and defensive characteristics is why Tencent should be at the top of your Chinese shopping list, especially as the coronavirus keeps people at home for an extended period of time.