The online sports gambling company's CEO says in-game betting is its "No. 1 focus."

DraftKings (DKNG -2.11%), the online sports and sports fantasy gambling company that debuted as a public company on April 24, 2020, says it is looking at in-game betting as its "No. 1 focus from a product perspective." In an interview with Barron's, CEO Jason Robins said there is opportunity in the U.S., noting that "in-game is about 75% of the revenues at sports books" in the U.K.

Robins discussed how real time in-game betting is popular in the U.K.'s English Premier soccer league for such things as which player will be issued the next yellow card. He believes that a sport like major league baseball in the U.S. is even more suited to this type of betting, since there are stoppages as a normal course of play. 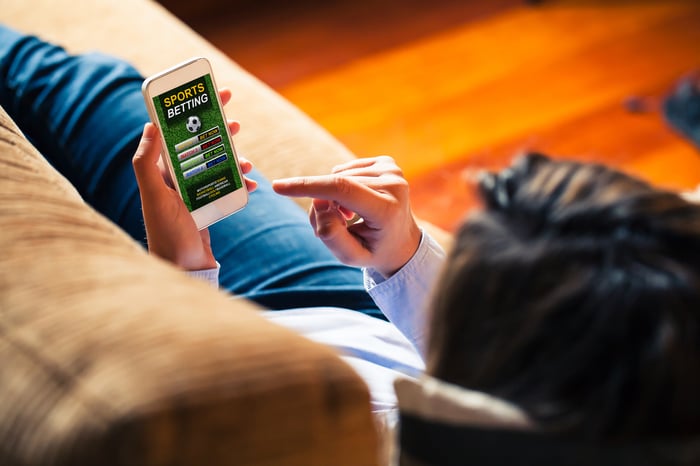 Robins told Barron's that "prop bets," which are specific in-game event wagers unrelated to the outcome of the game, are gaining in popularity. He said it's gotten so popular that tennis fans are even betting on every point. U.S. viewers who watched last weekend's charity golf event with Tiger Woods, Peyton Manning, Phil Mickelson, and Tom Brady saw DraftKings' odds for who would win each hole shown on the screen.

DraftKings stock has been on an upswing recently as some analysts have announced higher price targets. Sports betting has been legalized in only 18 U.S. states so far, so there is room to grow. And even though sporting events have virtually come to a halt in an attempt to stop the spread of COVID-19, Robins believes his company is still well positioned.

Even with the uncertainty brought on by the pandemic, Robins is sticking with his company's prior estimates for 2021, saying, "we're expecting the sports calendar to be full enough for us to achieve those numbers."