Please ensure Javascript is enabled for purposes of website accessibility
Log In Help Join The Motley Fool
Free Article Join Over 1 Million Premium Members And Get More In-Depth Stock Guidance and Research
By Daniel Foelber – May 28, 2020 at 8:23AM

The Wall Street rebound has mostly left these stalwarts behind, but over the long term, their prospects are strong.

As parts of the U.S. economy gradually reopen, and people begin to somewhat return to their normal behaviors, the stock market is recovering from its first-quarter plunge. The tech-heavy Nasdaq is now back in positive territory for the year and the broad-market S&P 500 index is down less than 10% year-to-date (YTD), a meaningful improvement from its over 30% decline at one point in late March.

If you feel like you've missed out on the rebound, don't worry -- there are still opportunities if you know where to look. Here are three top industrial stocks that are still down over 20% YTD at the time of this writing. 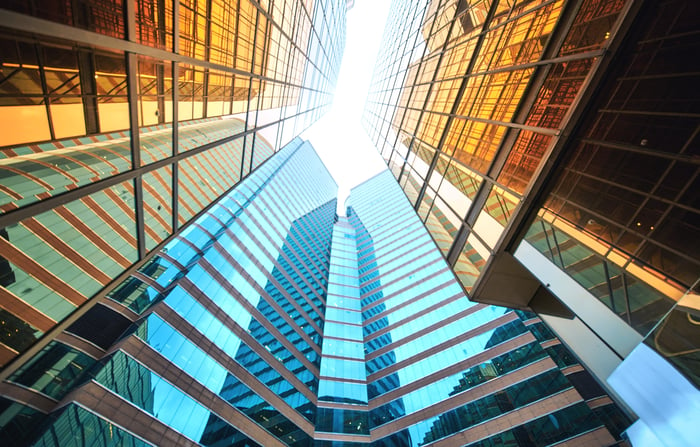 Like many industrials, Honeywell has undeniably taken a hit during the second quarter, though we won't find out just how large that hit has been until it reports. Honeywell predicts the worst of the economic slowdown will occur in this quarter before a gradual improvement starting in the third quarter. The company has forecast a decline of at least 25% in its aerospace segment sales, a more than 15% decline in performance, materials, and technologies sales, a more than 10% decline in Honeywell Building Technologies (although Honeywell thinks that segment could "begin to stabilize as businesses begin to reopen"), and a 5% decline in safety and productivity solutions. Overall, Honeywell is forecasting a 15% decline in Q2 2020 sales compared to Q2 2019 sales.

If you agree with Honeywell's management that the worst of the economic consequences from the pandemic are occurring in this quarter, then you can expect the company's pain will be short term and manageable. It's worth mentioning that this is isn't an opinion unique to Honeywell, but is shared by many policymakers, research firms, analysts, and other major U.S. corporations.

Backing everything up is Honeywell's strong balance sheet. The company doesn't have any bond maturities due in 2020 and just $800 million within the next year. Its cash position of $8.8 billion and $11.5 billion in undrawn sources of liquidity as of the end of the first quarter gives it reserves that more than cover its debt obligations.

Among the 10 largest industrials, Honeywell is one of the least financially leveraged, meaning it relies on funds from operations more than debt relative to its peers. It has also increased dividend payments every year for the last 20 years, more than quadrupling its payouts during that time.

Overall, Honeywell's 2020 outlook is a setback, but it doesn't reflect the long-term strength of the company. 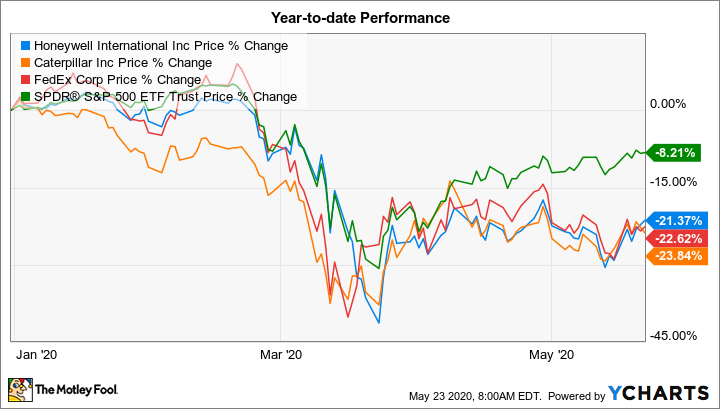 Caterpillar (CAT -1.11%) is seen as an economic bellwether due to its global footprint in construction, mining, oil and gas, marine, defense, and other infrastructure business segments. But this designation is a double-edged sword. In boom times, it booms louder, and in times of economic decline, it feels more pain. Caterpillar's business essentially depends on global growth, which is one reason why earnings in the first quarter fell 39% year over year, and why it withdrew its forecast for the remainder of 2020.

This is going to be a tough year for Caterpillar, but it has been through economic slowdowns before. In fact, Caterpillar has increased its dividend for 25 consecutive years, earning it a place among the coveted class of Dividend Aristocrats. The stock yields an attractive 3.6% at the time of this writing.

During its earnings call Caterpillar's CFO, Andrew Bonfield, noted that the company had $7.1 billion in cash at the end of the first quarter and $11.2 billion in long-term debt with no maturities until 2021. It was also able to issue $2 billion in bonds at low interest rates -- $800 million in 10-year notes at 2.6%, and $1.2 billion in 30-year bonds at 3.25% -- a good sign that creditors still see Cat as a low-risk loan candidate.

It's worth mentioning that the company's financial-debt-to-equity ratio, debt-to-capital ratio, and total long-term debt are now all at three-year highs, which isn't ideal. However, it's to be expected given the circumstances. Although its balance sheet could be better and its short-term prospects are grim, Caterpillar has the experience to get through this crisis and land on its feet -- and equally importantly, seems to have taken the necessary measures to do so.

In March, FedEx (FDX 1.55%) capped off what had already been a multiyear struggle by watching its share price drop to a 5-year low. FedEx's dismal first-quarter fiscal 2020 earnings (for the quarter that ended Aug. 31) came at a time when CEO Fred Smith was blaming the company's poor performance on just about everything, including lost customers, a global slowdown, the trade war, and an impending recession. Then the COVID-19 pandemic hit, and FedEx was faced with another macroeconomic event it wasn't prepared for.

The company's fiscal 2020 third-quarter earnings, (for the period that ended Feb. 29) were down over 50%. When it delivered those numbers in mid-March, FedEx also suspended its outlook for the year.

On the bright side, FedEx seems to be making headway as it tries to expand its niche in convenience delivery. The integration of TNT Express and growth in FedEx Express thanks to seven-day shipping could make the stock a nice turnaround play. It's weaning itself off Amazon logistics and shifting its focus toward more-reliable, higher-margin customers. Its recent deal with Microsoft is a step in the right direction.

More than anything, FedEx just needs to get its bearings, reset, have a few good quarters, and continue to redefine its brand. In the meantime, the company will pay you to wait on its turnaround with a 2.2% dividend yield and the comfort of knowing you're getting the stock at more than a 50% discount from where it was trading two years ago.

Honeywell, Caterpillar, and FedEx all admit that conditions in the short term won't be easy for them. As Warren Buffett says, "you pay a very high price in the stock market for a cheery consensus." But there is no cheery consensus surrounding these three industrials, and as such, you can get them all for more than 20% off from where they were at the end of last year. With an average yield of 2.8%, these three stocks offer investors a generous incentive to be patient, knowing they are well-positioned, especially at these reduced prices, to profit over the long term.