Please ensure Javascript is enabled for purposes of website accessibility
Log In Help Join The Motley Fool
Free Article Join Over 1 Million Premium Members And Get More In-Depth Stock Guidance and Research
By Howard Smith – May 28, 2020 at 11:34AM

The analyst maintained buy ratings and raised the price targets on the pizza chains.

Longbow analyst Alton Stump has raised the firm's share price targets on Domino's Pizza (DPZ -3.25%) and Papa John's International (PZZA -3.52%) to $441 and $95, respectively, representing almost 20% upside from current prices on each. Both pizza chains have been giving interim business updates due to their notable increases in sales as people have been sheltering at home to help stem the spread of COVID-19.

Stump noted that both companies reported a "sharp acceleration" in comparable store sales for the first eight weeks of the second quarter. The analyst said the target price boosts reflect the fact that both companies will "benefit significantly from the current environment." 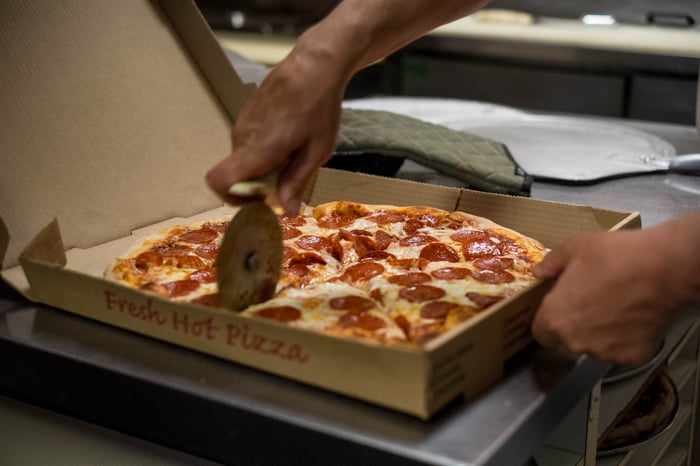 Domino's noted that the sales growth in its fiscal Q2 (which began on March 23) has been driven by higher demand for delivery and carryout due to COVID-19 restrictions and social distancing efforts. Notably, the company said: "Our U.S. sales results accelerated materially over weeks five through eight of the second quarter when compared to weeks one through four."

Papa John's said it saw a 33.5% year-over-year increase in North American comparable sales in May, and 7% internationally. "In May, for the second straight month, Papa John's team members and franchisees delivered the best sales period in the company's history," said President and CEO Rob Lynch.

Both pizza chains have been addressing consumer safety concerns amid the pandemic. Papa Johns has added a zero-contact delivery option, and Domino's cleverly created the "pizza pedestal" -- a simple cardboard platform upon which its drivers can set contactless delivery orders, rather than leaving pizza boxes directly on the ground.