Please ensure Javascript is enabled for purposes of website accessibility
Log In Help Join The Motley Fool
Free Article Join Over 1 Million Premium Members And Get More In-Depth Stock Guidance and Research
By David Jagielski – May 29, 2020 at 6:55AM

If you've got some savings built up, this can be an easy way to supplement your income.

The markets have been rallying since March's crash, but that doesn't mean they're stable just yet. With a lot of uncertainty surrounding the COVID-19 pandemic, stability comes at a premium these days. And one way you can add some of it to your life is by investing in dividend stocks.

While most dividend stocks pay on a quarterly basis, that doesn't mean you have to wait three months for a payment. The three stocks listed below all pay dividends in different periods, and collectively, they can generate recurring monthly income for you.

Merck (MRK -0.13%) is a stable dividend stock that you can buy and hold for years. The drug manufacturer has posted a profit in each of the past 10 years, and the majority of those times, its profit margin was in the double-digits.

That's a trend Merck continued in the first quarter of 2020. It released its latest results on April 28, where it generated $3.2 billion in profit on sales of $12.1 billion -- good for a profit margin of 27%. Sales were up 11% year over year, with the company's cancer-fighting drug Keytruda leading the way with revenue growth of 45% from the prior-year period. 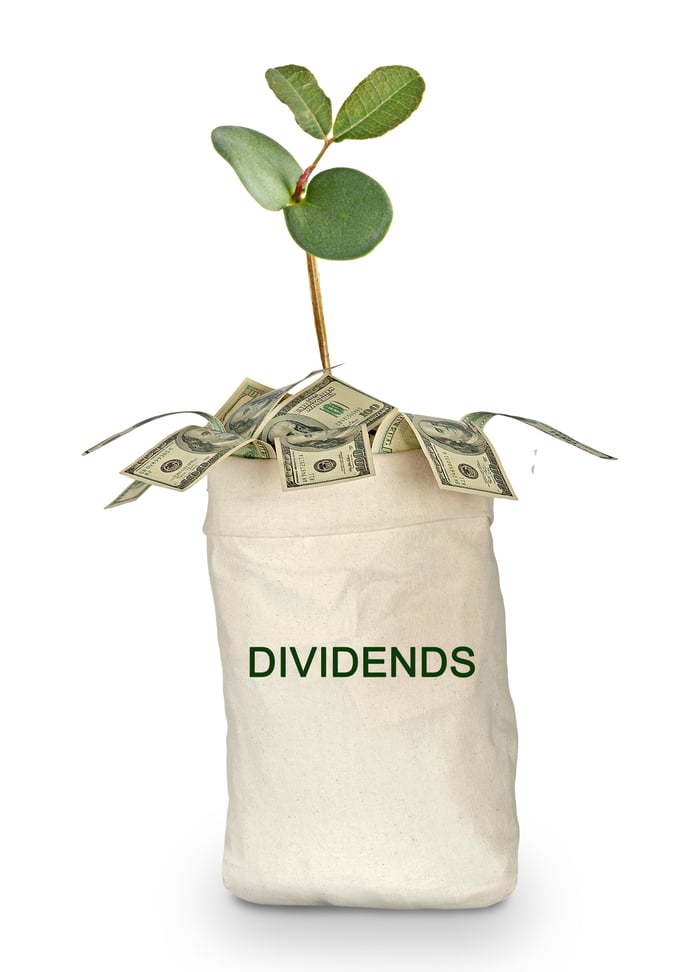 Although the company lowered its guidance for 2020 as a result of COVID-19, there's little doubt that Merck can bounce back from the adversity given the essential drugs it provides to patients.

Currently, Merck pays investors a dividend of $0.61 every quarter, which today yields around 3.1% -- well above the S&P 500 average of 2%. Merck also increased its payouts last year by 10.9%. The company typically makes payments to shareholders in January, April, July, and October.

Costco (COST -2.48%) is one retail stock that's been doing well during the pandemic. it's been a popular destination for consumers loading up on toilet paper and other day-to-day essentials. But irrespective of short-term fluctuations due to the coronavirus, the company's been a consistent profit and growth machine over the years. While its profit margin is typically not more than just a couple of percentage points, Costco has consistently recorded a profit in each of the past 10 years. And its sales have been soaring, too. From $77.9 billion in fiscal 2010, the company's top line nearly doubled to $152.7 billion in fiscal 2019.

There's a lot to like about Costco stock. Not only is it consistent and growing, but it also pays a modest dividend. The Washington-based company pays out $0.70 every quarter, which, at a share price of around $300, yields a modest 0.9%. Costco normally pays its dividends every February, May, September, and November, although occasionally there are some fluctuations. Earlier this year, Costco hiked its payouts by 7.7%.

Of the three stocks listed here, Bank of America (BAC -2.65%) has been hit the hardest as a result of COVID-19. With a possible recession around the corner, the bank is facing challenges -- and their impacts on its financials.

In its first-quarter results, which the North Carolina-based bank released on April 15, it increased its provision for credit losses by nearly $4 billion. That resulted in the bank's profits falling by 45% from the prior-year period, but it was still able to post a $4 billion profit.

It's a bit of a risk investing in financial stocks given that we don't know how long the pandemic will weigh down the economy or how much of an impact it will have on the big banks. But with Bank of America at a depressed share price, now could also be a great time to buy the stock as it's down more than 25% this year. Trading at just 10 times earnings, Bank of America's a cheap buy, and when combined with its dividend, it could make for a solid addition to your portfolio. States are already opening back up, and that's good news for the economy and financial stocks like Bank of America.

Currently, the stock pays a quarterly dividend of $0.18, which yields 2.9% annually. It's an above-average payout that the bank distributes in March, June, September, and December. Last July, Bank of America raised its payouts by 20%.

Invest in all three to diversify and generate recurring monthly income

Here's a quick look at how the stocks have done year to date: 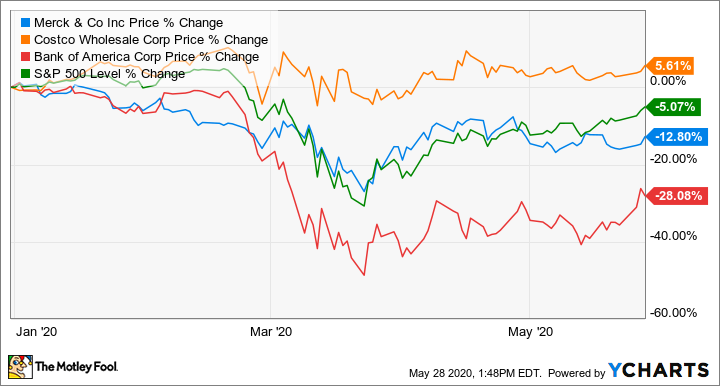 Only Costco has outperformed the S&P 500 in 2020, but both Merck and Bank of America will likely recover as the economy gets back to normal.

Either way, all three stocks can be solid long-term investments if you can hang on to them in your portfolio for many years. And since all three have different payment schedules, you could possibly earn dividend payments in every month of the year. Costco and Bank of America overlap with their September payments, but Costco's third payment of the year has fallen in August and even July in recent years.

It's never a guarantee when a company may pay a dividend, so there's the potential for some fluctuations here and there. But for the most part, investing in these three stocks should generate recurring income that will generally come every month -- or at least pretty close to that.

With a good mix of value, growth, and dividends, these are all solid investments you can safely hold on to for the long term.