Any stock could theoretically double your money. Enough good luck and time can make nearly any stock a huge winner.

But what if you don't want to rely on good luck? What if you prefer to enjoy tremendous returns sooner rather than later? Just any stock won't work.

However, there are some stocks that realistically could double your initial investment in a reasonably short period of time without requiring extraordinarily good luck. I think that investing $5,000 in three specific stocks could double your money by the middle of 2025. Here are those stocks -- and exactly how I believe they can deliver 100% or greater returns in only five years. 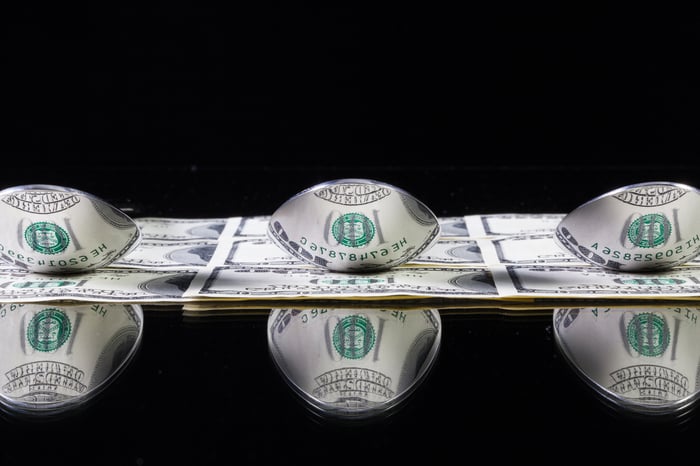 Innovative Industrial Properties (NYSE:IIPR) ranks as the leading real estate investment trust (REIT) focused on the medical cannabis industry. Over the last five years, the stock has skyrocketed nearly 330%. My view is that IIP should be able to continue its remarkable growth trajectory for years to come.

There are two keys for IIP to double an initial investment by mid-2025. First, the company must keep paying a dividend at least at its current level. Second, it needs to add more medical cannabis properties and lease them out. Both goals should be attainable.

IIP's current dividend yield is 4.75%. As a REIT, the company must pay out at least 90% of its taxable income to shareholders as dividends. For IIP to keep paying dividends at current levels, it simply needs to keep its earnings from falling. With the medical cannabis industry in the U.S. continuing to expand, I don't think that will be a big problem. It hasn't been so far: IIP has boosted its dividend by 67% over the last 12 months.

For IIP to generate a total return that doubles your initial investment over the next five years, its share price would have to increase by an average of a little over 10% annually. If we assume that the stock will rise as its earnings rise, this means the company will need to add and lease out between six and eight new medical properties each year. So far in 2020, IIP has added 10 properties. Again, with the growth in the medical cannabis market, the company should be able to easily add the required number of properties needed to double an initial investment by mid-2025.

Livongo Health (NASDAQ:LVGO) hasn't doubled investors' initial investment. However, the stock has only traded publicly since July 25, 2019. During the past 10 months, though, the healthcare stock is up 57%. Livongo is certainly on a trajectory to be able to at least double within the next five years.

The company provides a software platform that helps individuals manage chronic conditions such as diabetes and hypertension. Livongo currently has 1,252 clients and 328,000 members using its diabetes management platform.But that's only a sliver of the potential market.

In the U.S. alone there are 31.4 million people with diabetes. Another 500,000 individuals are diagnosed with diabetes each year. Livongo doesn't have to capture very much of this market to double in size. The opportunity in hypertension is even greater, with 27.4 million American adults with hypertension whose health insurance is provided by their employers and another 12.2 million covered by Medicare or Medicaid.

Livongo will have to demonstrate that its technology improves patient outcomes and helps lower healthcare costs to gain a significantly larger market share. However, that's exactly what it has been doing so far to win over 30% of the Fortune 500 as clients. I expect it will keep this momentum going over the next five years and beyond.

Alteryx (NYSE:AYX) stock has soared 44% so far in 2020. Over the last five years, shares of the data analytics software company have skyrocketed more than 830%. And there's still plenty of room for Alteryx to go even higher.

The company estimates that its addressable market is at least $49 billion annually. With the explosive growth of data worldwide and the challenges in analyzing all of this data, that figure seems realistic. Alteryx currently claims less than 1% of this market.

Its market share is growing quickly, though. In the first quarter of 2020, Alteryx's sales soared 43% year over year. CEO Dean Stoecker noted in the company's Q1 call that Alteryx's customer base now includes 37% of the Global 2000. He also said that existing customers are using more of the company's products and spending more, with a net expansion rate of 128%.

This increased adoption by existing customers is a core component of Alteryx's "land and expand" business model. The company also is seeking to expand internationally. With these prospects, along with the likelihood that Alteryx launches new products in the near future, I think the stock will easily double or more over the next five years.

Investing $5,000 in These 3 Stocks Could Double Your Money in 5 Years @themotleyfool #stocks $AYX $IIPR $LVGO Next Article
Current