Please ensure Javascript is enabled for purposes of website accessibility
Log In Help Join The Motley Fool
Free Article Join Over 1 Million Premium Members And Get More In-Depth Stock Guidance and Research
By Keith Speights - Jul 5, 2020 at 7:07AM

Get ready for sizzling growth for each of these winning stocks.

Most stocks aren't going to make you rich anytime soon. Many simply don't have sufficient growth opportunities. Others have the potential to generate tremendous wealth but are way too risky.

There are some stocks, though, that have clear paths to growth without taking on too much risk. These are the kinds of stocks that could quite possibly make you rich. Which stocks fit the bill? Here are three growth stocks you can buy right now that could make you crazy rich over the long run. 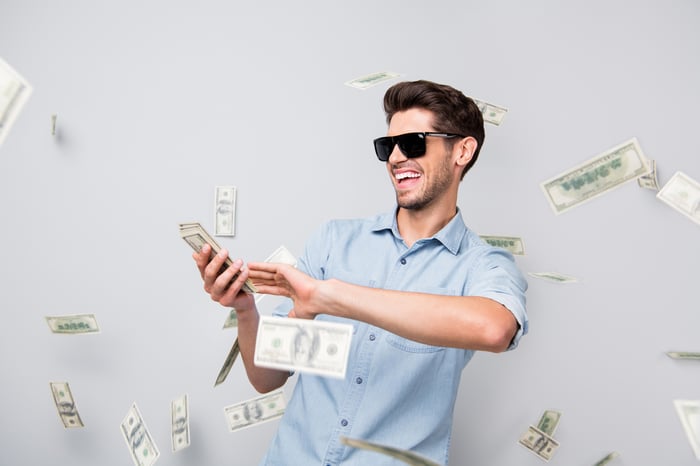 Imagine you have a lot of data to analyze. There's so much data from so many sources that you have to wait on help from programmers. And then you wind up importing the data into spreadsheets to work with it more easily. There's a lot of extra time and effort. Alteryx (AYX -1.09%) provides a solution for this all-too-common scenario.

The company's software is "democratizing data and analytics". No programming required. No spreadsheets necessary. The entire data analysis process from beginning to end is automated. As you might expect, Alteryx's platform has become wildly popular, especially with large corporations. The company now claims over 6,400 customers, including 37% of the Global 2000.

Don't be too concerned with Alteryx's lofty valuation. Shares currently trade at nearly 25 times sales. But with a market opportunity in the ballpark of $50 billion annually and a practically must-have product, Alteryx shouldn't have a problem delivering growth that will make the stock worth its premium price.

You probably won't have to imagine benefiting from Fastly's (FSLY -2.88%) technology. It's likely that you already have. The company's edge computing and content delivery network (CDN) platforms speed up the delivery of apps and data from the cloud for a long lineup of customers, including The New York Times, Pinterest, Shopify, and Yelp.

The COVID-19 pandemic is causing companies to move to the cloud like never before. Market researcher IDC predicts that a whopping three-fourths of all data will be created and processed at the network edge (the point where companies' networks connect to the internet) by 2022. That sets Fastly up for tremendous growth, which it's already delivering.

Fastly is a top player to watch in both edge computing and CDN, two markets that should top $17 billion each annually within the next couple of years. The company's opportunity and technology advantages should make its steep price tag (shares trade at 38 times sales) less worrisome.

Currently, many types of cancer are diagnosed late in the game. Sometimes, it's too late for treatment to be effective. But envision a world where nearly any kind of cancer can be detected through a simple blood test performed at your annual checkup. Guardant Health (GH -4.68%) is working hard to make that world a reality.

The company already markets two liquid biopsies, which are tests that detect DNA fragments of cancer cells in the blood. Guardant360 is used in determining the best therapy for patients with advanced-stage cancer. GuardantOMNI helps biotechs and pharmaceutical companies screen patients for clinical studies of cancer drugs. But Guardant Health is testing new liquid biopsies that could enable the early cancer detection that's only a dream right now.

Guardant Health's addressable market for its products could realistically top $50 billion annually. The company's market cap currently stands at around $8 billion. Its price-to-sales ratio of 31 is at a nosebleed level. But 10 years from now, I suspect investors who didn't buy Guardant Health at its seemingly pricey valuation will wish they did. You often have to pay up for stocks that have the potential to make you filthy rich -- stocks like Alteryx, Fastly, and Guardant Health.

Investing $5,000 in These 3 Stocks Could Double Your Money in 5 Years

Have $1,000? Consider Investing It in 1 of These Hot Growth Stocks