Please ensure Javascript is enabled for purposes of website accessibility
Log In Help Join The Motley Fool
Free Article Join Over 1 Million Premium Members And Get More In-Depth Stock Guidance and Research
By Rick Munarriz – Jun 1, 2020 at 9:15AM

The ID management platform provider has been an 11-bagger since going public three years ago, but last week's blowout report had one fatal flaw.

Everybody's loving Okta (OKTA 2.33%) these days. The shares have more than doubled since bottoming out in mid-March, hitting another all-time high last week. The identity management platform provider's stock is an 11-bagger since going public in 2017, and last week's blowout fiscal-first quarter report is making bulls even more giddy.

At least six analysts jacked up their price targets on Okta following Thursday afternoon's report, but we'll get back to that later. There's a lot of optimism in the air. With so many people working from home, it's more important than ever to make sure that it's a company's trusted hire logging in with access to sensitive company info. Okta can't seem to be doing anything wrong, but there's trouble in this bullish paradise. 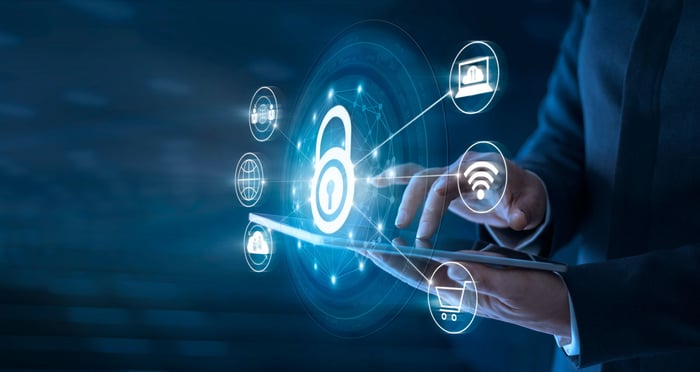 There's no shortage of demand for Okta's cloud-based platform. Revenue rose 46% for the fiscal first quarter that ended in April, fueled by a 48% surge in the bread-and-butter subscription revenue component that makes up 95% of its top-line results. Remaining performance obligations -- accounting-speak for its subscription revenue backlog -- has soared 57% over the past year.

Okta was expecting revenue to climb only 37% to 38% in the guidance it issued in early March, and that's important -- but not in a good way. Guidance was a big letdown.

The market darling is sticking to the same $770 million to $780 million for the full fiscal year that it was forecasting three months ago, and that's a problem. It landed $10 million to $12 million above its outlook for the fiscal first quarter, and it couldn't even boost its full-year guidance by that amount?

Its backlog is rising faster than revenue, but why is it tapping the brakes instead of stepping on the accelerator? The $185 million to $187 million in revenue it's forecasting for the current quarter is barely above the $182.9 million it just posted in the fiscal first quarter. That's the kind of sequential uptick that should start raising some flags -- red ones or possibly even white ones.

After blazing through a 46% revenue pop in the first three months of this fiscal year, the pace is slowing to between 32% and 33% in the current quarter. The full-year forecasts calls for 31% to 33% growth, but if you think that's essentially mirroring the current quarter, you're going to hate the math.

To have Okta not boost its guidance on Thursday -- after blowing past its first-quarter numbers -- is not what you want to see as an investor. This is Okta saying that the first three months of fiscal 2021 were better than it expected back in early March. The next nine fiscal months will be worse than it was modeling back in March. Compare the final two quarters of this year with the results from the same period a year earlier, and this is growth decelerating to a 25% to 29% pace. Wasn't this supposed to be Okta's time to shine?

I don't buy the argument that Okta is just being conservative. You can be conservative and still boost your outlook. You can sandbag and still raise your guidance -- unless you don't have the room to sandbag.

Either way, investors don't care. Okta initially moved lower after Thursday afternoon's report, only to move 6% higher on Friday. This brings us to the six Wall Street pros who boosted their price targets. By Friday's close, the stock was already above five of those six revised price goals. The only refreshed analyst above that -- Andrew Nowinski at DA Davidson with a $210 price target -- implies just 7% of upside from here.

Are you sure you want to take that risk? Is this really the time to consider a company that's posting big losses even on an adjusted net income basis that's trading at an enterprise value that's a whopping 37 times trailing revenue? With Okta expecting growth to decelerate sharply as 2020 plays out, I know many of my fellow Fools will disagree with me, but perhaps this is not the best tech stock to sink your teeth into this month.