The company is an aggressive newcomer to the infectious-disease market and its COVID-19 programs are very promising.

Thanks to its newly announced COVID-19 antibody therapy candidates, Vir Biotechnology's (VIR 0.89%) stock is still up more than 10% from the beginning of May and more than 180% from the start of the year. On top of its recent gains, there's reason to believe that Vir is positioned perfectly for continued growth.

While the company has a long way to go before it reaches profitability, between its low-risk pipeline programs for COVID-19 and a demonstrated competency for preclinical drug development for infectious disease, Vir's future seems bright. 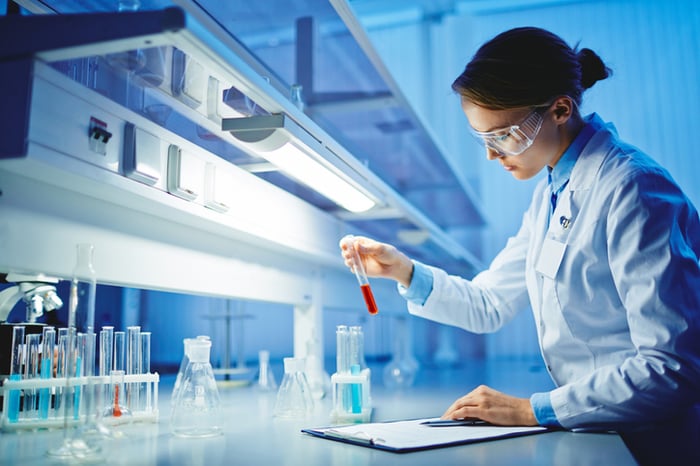 Vir's preclinical COVID-19 projects include two antibody therapies that it claims could temporary prevention and the treatment of coronavirus infections. VIR-7832 is both a prophylactic and a therapeutic, whereas VIR-7831 is only a therapeutic.

Because they are antibody therapies, Vir's candidates would be more effective at helping sick patients get better by reducing their viral load than it would be at preventing infections like a traditional vaccine might. In a nutshell, both of Vir's antibody programs could help patients to fight COVID-19 immediately by neutralizing viral particles in their bloodstream after they get a dose of the therapy. Then, once the patient's symptoms subside, the antibodies would remain in their system for several days or weeks, protecting them from re-infection. This process is key to both of Vir's COVID-19 antibody programs, but there's a bit more to the story.

Vir suspects that VIR-7832 may also function as a T-cell vaccine, training the immune system to react to future infections. This would mean that patients could be administered the antibody even if they don't expect to get sick. If Vir's hunch is correct, VIR-7832 would provide longer-lasting immunity than VIR-7831, and it might be a contender for mass production as a prophylactic.

The company's approach is uncontroversial from a scientific perspective, given that neutralizing antibodies from COVID-19 survivors have already been shown to combat the disease in vitro by numerous independent research teams and similar therapies were successfully used to treat human patients with SARS. Similarly, Vir's approach is front-run by ongoing clinical trials testing the efficacy of antibodies from recovered COVID-19 patients on improving disease outcomes in people who are currently ill.

The average vaccine in development is estimated to have only a 6% chance of proceeding all the way to approval and the market, but Vir's antibody products may fare better because they are adapted from natural antibodies known to be effective and safe. There's no guarantee of Vir's efforts ending in blockbuster revenue, but in the highly risky world of biotech, the prospects of these two COVID-19 projects are extremely favorable even from a conservative perspective.

However, given that the antibodies would be copies of naturally ocurring antibodies, it's uncertain whether intellectual property protection would be sufficient to prevent a competitor from creating very similar products. For most biotech companies, this would be a dealbreaker, as it would effectively prevent the ability to recoup development costs with a period of exclusive production rights. But not for Vir. By bucking the traditional wisdom regarding exclusivity and drug development, Vir has a real chance of entering the market sooner than competitors at a time when demand for its product would be enormously high.

That isn't to say that Vir is an unambitious company because it is moving forward with safer programs. In contrast to its two antibody therapy programs, Vir's VIR-2703 program is riskier because it uses a scientific approach which hasn't been tested in humans for the purpose of infectious disease. Rather than acting to neutralize viral particles directly like an antibody might, VIR-2703 relies on small chunks of genetic information called silencing RNAs (siRNAs) which disrupt regions of the viral genome.

Counting on this program to succeed would be a mistake. Most large pharmaceutical companies gave up trying to develop siRNA therapies in the mid-2010s after nearly a decade of failures, and the only siRNA therapy approved by the FDA isn't for an infectious disease.

On the other hand, early favorable clinical results from VIR-2703 should not be interpreted as a reason to buy the company's stock. Stumbles stemming from a lack of a proof of concept in human patients further down the pipeline could easily erase any gains. Either way, Vir's drug development pipeline looks more like a risk-balanced portfolio than a selection of technological and scientific gambles like so many other biotechs.

There's more to Vir than COVID-19

If Vir brings one of its COVID-19 programs to market, it'll be one more addition to the company's impressive roster of therapies and prophylactics for viral diseases. Aside from its three unique COVID-19 programs, Vir's pipeline includes a handful of other projects intended to treat or prevent illnesses caused by hepatitis B, influenza, tuberculosis, and even HIV. Importantly, all but two of these pipeline projects are in the preclinical phase, so the company's clinical acumen is far from proven.

In terms of advanced programs, the closest Vir has to offer is its VIR-2218 therapy for hepatitis B, which it suspects may be curative for most patients. If Vir brings a curative therapy to market, the company may have trouble maintaining its revenue over the long term because a cure shrinks the pool of eligible patients. As the hepatitis B therapeutics market is only worth around $2.6 billion, it's possible that Vir's hepatitis B therapy would meet the same fate as the low-earning hepatitis C therapy produced by Gilead Sciences (GILD -2.19%)But, with 257 million people worldwide living with hepatitis B compared to only 71 million living with hepatitis C, it's less likely that Vir will experience the same difficulties. Importantly, Vir isn't letting Gilead's experience stop them from moving forward with a curative therapy candidate. Even if the long-term profitability of VIR-2218 is in jeopardy of being a victim of its own success, Vir is willing to take a chance rather than stick to a safer opportunity.

Buy Vir before the rush

In summary, Vir's COVID-19 pipeline has two antibody programs that have a better than average chance of passing through clinical trials. Elsewhere, the company's technology platform appears formidable, but its clinical pipeline is still in its infancy, despite a bevy of compelling seedlings.

Given the level of public need for COVID-19 treatments and vaccines, it's likely that if Vir's COVID-19 programs look promising once they hit the clinic in the summer, they'll be expedited through clinical trials. This means that the company's minimal past experience in clinical operations and clinical development will be of little use, so it's likely to need to lean heavily on larger collaborators like Biogen, GlaxoSmithKline, and Alnylam Pharmaceuticals.

It's easy to envision a future where Vir gets acquired by one of these collaborators if its trials have positive outcomes. In the meantime, progress by Vir's major competitors like Novavax and behemoth vaccine producers like Merck is unlikely to diminish the company's upward trajectory, as competing products would be targeted at preventing COVID-19 rather than both treating and preventing it. As the market grows to recognize Vir as a rising contender in the COVID-19 therapeutic market, public interest in the company will explode, to the benefit of its shareholders. I'd recommend buying Vir shares now, to maximize the benefit of successive boosts to the company's stock price as its COVID-19 candidates pass through each phase of clinical trials. Holding onto Vir for a few years will maximize the gains, but don't discount the probability of near-term gains either.