Despite no notable Tesla-specific news over the weekend, shares of the electric-car maker are rising on Monday. Here's what investors should know.

The stock's gain likely reflects a combination of Elon Musk's success at the other company he runs, SpaceX, over the weekend, and a good day in the market for many growth stocks. 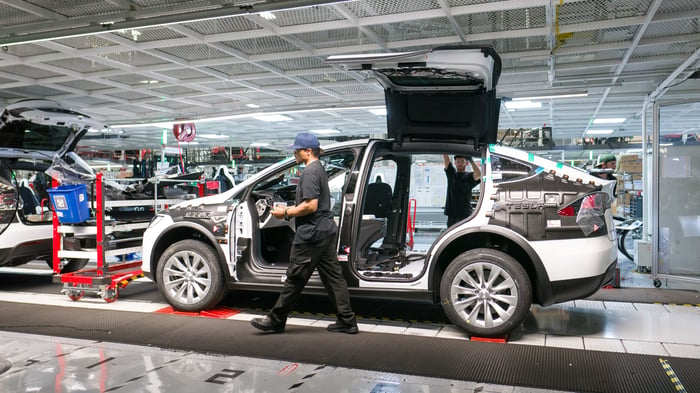 On Saturday, spaceflight company SpaceX -- founded and led by Musk -- successfully sent two NASA astronauts to space atop SpaceX's Falcon 9 rocket on its Crew Dragon capsule. On Sunday, the Crew Dragon capsule docked to the International Space Station, marking the first time a commercial spacecraft has brought humans to the ISS. According to search trends on Alphabet's Google, the launch appears to have spiked interest in Tesla -- another company Musk founded. Perhaps the successful launch gave investors more confidence in Musk's leadership.

Additionally, large-cap and megacap growth stocks had a good day in the market, with many of them seeing percentage gains well in excess of the S&P 500's 0.4% move higher. It wasn't surprising to see Tesla follow suit as it is a growth stock in its own right.

Shares of Tesla have been rising over the last few months, recovering almost all of their losses since the coronavirus market crash. Investors are likely optimistic about the company's prospects given the automaker's launch of the Model Y and a return to production at its factory in Fremont, California.