The poultry processor's CEO was indicted for price-fixing.

Shares of poultry processor Pilgrim's Pride (PPC -2.34%) were getting taken to the woodshed today after the company's CEO was indicted for price-fixing, following a years-long investigation. 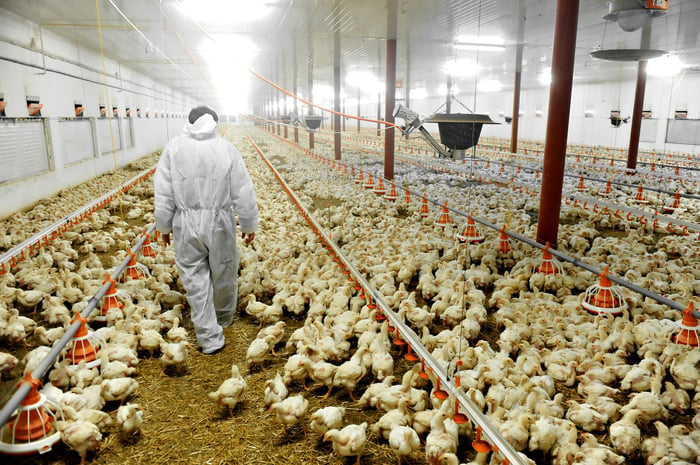 Jayson Penn, the CEO of the No. 2 poultry processor behind Tyson Foods, was charged in Colorado along with Roger Austin, a former vice president of the company, and face a penalty of up to 10 years in prison and a $1 million fine.  Authorities have also issued subpoenas to Tyson and Sanderson Farms, whose shares also fell on the news.

The price-fixing ring for broiler chickens was alleged to have to taken place from 2012 to 2017.

It's unclear what the consequences will be for Pilgrim's Pride, though the company will probably have to name a new CEO and could be subject to fines as well as increased oversight over antitrust issues. There are also civil lawsuits pending from supermarket chains like Walmart and Kroger and food suppliers including U.S. Foods and Sysco, which could lead to sizable penalties.

The meat industry  has already been facing challenges related to COVID-19's impact on meatpackers and the loss of restaurant customers. The price-fixing scandal is likely to be a cloud over Pilgrim's Pride and the industry until it's resolved.