Please ensure Javascript is enabled for purposes of website accessibility
Log In Help Join The Motley Fool
Free Article Join Over 1 Million Premium Members And Get More In-Depth Stock Guidance and Research
By Rich Duprey – Jun 3, 2020 at 10:15AM

Some companies just provide the right mix of income, growth, and safety.

The COVID-19 pandemic has revealed a major hole in Sysco's (SYY -1.08%) otherwise-solid business model -- a model that has served it and its shareholders well for decades.

The company caterers to the foodservice industry, selling foods and other products to restaurants, educational institutions, and hospitality businesses; as such, Sysco was knocked back on its heels when the coronavirus forced virtually all of those outlets to shut down. That resulted in the stock losing half of its value in a span of weeks. And yet, this company still has the potential to be a dream stock for retirees. 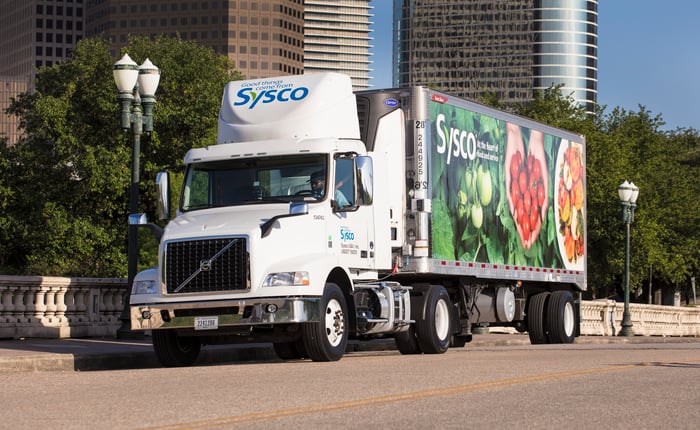 There's a saying in legal circles that "hard cases make bad law" -- by which they mean that it's unwise to institute general rules based on extreme cases. Something similar could be said for judging a company by what happened to it during a global pandemic.

Over the past 50 years, Sysco has returned over 30,000% to investors compared to returns of 2,800% by the S&P 500 as a whole, so considering only its performance over just two (admittedly terrible) months is clearly the wrong way to gauge it as an investment.

Moreover, this calamity may eventually work to Sysco's benefit.

Most of its customers' kitchens were closed down by the outbreak, and among those that remained open -- such as restaurants that were able to operate solely for carryout and delivery -- demand for food, equipment, and supplies was dramatically reduced.

That forced Sysco to seek out new business areas. Both it and industry peer U.S. Foods (USFD -0.34%) announced they were looking to supply supermarkets where business was (and still is) booming.

As everyone was forced by the pandemic to abruptly adapt to a new way of living, grocery store sales surged. They rose 27% in March year over year, and while the gains slowed, they were still up 13% year over year in April.

While supermarkets like Walmart and Kroger already have a host of long-standing suppliers, the shock to their supply chains was tremendous, so supplemental support may well have been appreciated as they worked to keep their shelves stocked. Smaller operations may have needed the additional supply even more.

Gaining entry to this new market may require Sysco and U.S. Foods to put in some heavy effort, but both have long, stellar track records of delivering the goods, and supermarkets could very well want to take advantage of what they have to offer.

It may just be a stopgap measure, but it could also provide incremental sales growth for the foodservice suppliers over the longer term.

Large swaths of the country are beginning to reopen, and while the new normal may mean a somewhat reduced pace of growth for some time, life will get back to the hustle and bustle to which we were accustomed.

People want to go out to eat again, schools are likely to start holding classes again in the fall, and the hospitality industry will revive. After months-long layoffs, their kitchens will need to restock. Business for Sysco is going to get busy.

When those orders start flooding in, the market should once again look favorably on Sysco's stock, which even after having more than doubled off the lows it hit in mid-March still sits 35% below the 52-week highs it set in December.

Arguably, one of the main qualities that attracts many investors to Sysco's stock is its dividend. But unlike many other companies that took serious hits from the pandemic, Sysco did not cut its payout, which currently yields 3.3% annually. It has a history of consistently increasing that payout on an annual basis that has lasted for 50 years -- it earned its space on the elite Dividend Kings lit just last year -- so there's good reason to believe Sysco will do what it takes to keep that streak going.

The foodservice leader certainly faces its share of headwinds, but also a good number of tailwinds too. It generated substantial free cash flow of $1.21 billion over the last 12 months, and while the dividend required some $830 million of that, or 68%, due to the massive impact of the pandemic, Sysco has plenty of safety incorporated into its operations to be able to continue paying the dividend and growing it.

The exception proves the rule, they say, and this pandemic has been an exceptional occurrence that only proves Sysco has the wherewithal to remain a retiree's dream stock, just as it has been for the past few decades.