The drug blocked the SARS-CoV-2 virus from replicating in a preclinical experiment.

On Friday, Sorrento Therapeutics (SRNE -2.42%) announced positive results from preclinical testing of STI-4398, a protein to neutralize the SARS-CoV-2 virus. The company said that the drug candidate it has nicknamed "Covidtrap" completely inhibited the ability of the coronavirus to infect cells that have the same ACE2 receptors that are present on the respiratory epithelial cells that it targets in humans.

Covidtrap is a proprietary ACE2-Fc protein designed to bind to the spike protein of SARS-CoV-2 and block it from infecting respiratory cells. Without the ability to penetrate target cells, the virus wouldn't be able to replicate and spread itself.

The company has discussed the drug with the Food and Drug Administration and has received guidance for advancing it both as a treatment for patients infected with the virus and as a prophylactic measure for preventing COVID-19. The next step will be animal studies, but the company is already making plans for clinical studies in humans. 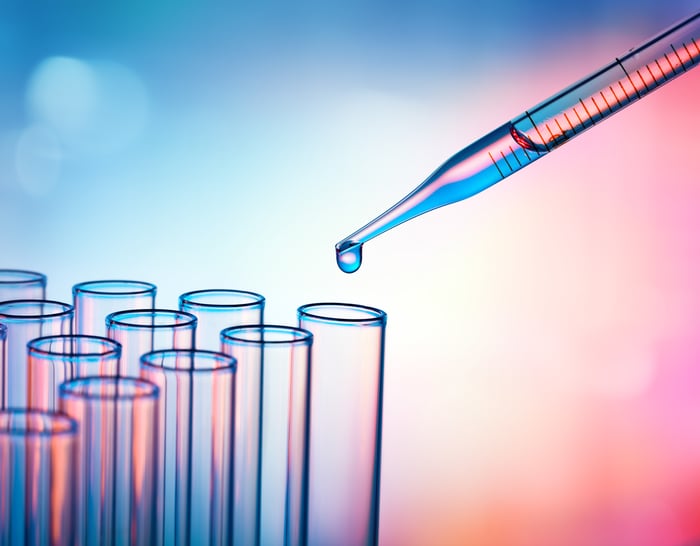 In the experiment, STI-4398 neutralized the virus and prevented it from infecting cell cultures derived from African green monkeys in a laboratory setting, but that's a long way from determining whether it can safely and effectively fight the disease in people, and the company doesn't have a timeline for that, yet.

Last month, Sorrento announced results from an in vitro experiment for STI-1499, an antibody that it said demonstrated "100% inhibition" of SARS-CoV-2, and the stock almost quadrupled in two days. Since then, shares have drifted downward as investors seemed to consider the risks ahead, despite the encouraging results in petri dishes. Friday's news that the company could have a second drug candidate that could be equally effective in fighting COVID-19 got a more muted reception from Wall Street -- while shares were up by as much as 18% in intraday trading, they closed only 6.7% higher.