Please ensure Javascript is enabled for purposes of website accessibility
Log In Help Join The Motley Fool
Free Article Join Over 1 Million Premium Members And Get More In-Depth Stock Guidance and Research
By Nicholas Rossolillo – Jun 6, 2020 at 10:00AM

The stock is priced as if it’s the future leader of communications, and that might be okay.

If you followed the goings-on at Zoom Video Communications (ZM -0.12%) during the coronavirus crisis, it seemed that it was far from firing on all cylinders. Security and privacy issues became a mounting concern as the number of business, government, and household users surged amid shelter-in-place and work-from-home orders.

No bother, though. Zoom quickly put in much-needed work to update its security, and it has continued to garner more attention as the world adapts to a new normal -- or at least a temporary new normal -- amid this pandemic. And in a short three-month stretch, Zoom has gone from large-ish, fast-growing tech company to mega-cap household name, and one carrying a stock valuation that assumes it will become and remain a staple in the global communications industry.

I've heard plenty of guffaws, both about the company's prospects and more recently the absurd-looking valuation. Before joining the chorus of naysayers, consider two things. 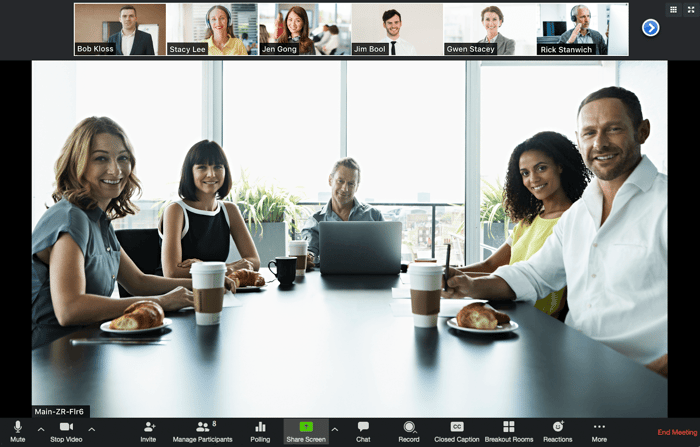 COVID-19 has been a "black swan" for many tech companies, a phrase referring to a nearly impossible to predict event that creates massive changes in expected outcomes. Usually a black swan is used in a negative context, and the coronavirus most certainly fits the bill. Except that for Zoom, this is a black swan that brings positive side effects with it.

The problem, according to detractors, is that the absurd rate of revenue growth is now more than priced in as Zoom's price-to-sales ratio (market cap divided by trailing-12-month revenue) is at a crazy 71.8. Who wants to pay nearly three-quarters of a century's-worth of revenue, not profit, for a stock? Most would say, um, no thanks. For reference, not once has mighty Amazon ever carried that high of a price tag. Very briefly in early 1999 during peak dot-com bubble euphoria, Amazon stock traded for over 40 times trailing 12-month sales.

Except here's the thing. Looking backward to value a growth stock doesn't exactly work. It's all about future potential. And although Zoom is factoring in elevated business demand for its service all year thanks to shelter-in-place rules, it is nevertheless worth noting that full-year guidance for revenue of as much as $1.8 billion represents a nearly 190% increase over last year -- which was also pretty impressive with an 88% pre-pandemic increase. Nevertheless, when using current year expected revenue, the price-to-sales ratio falls to 33.1. It's still a hefty price tag that factors in continued double-digit growth beyond 2020, but investors who cling to the much higher trailing metric aren't getting the whole picture.

And here's where things get really ridiculous. Revenue growth is all well and good, but as a company successfully scales, it's all about what the business keeps in the way of profits. As a high-growth cloud computing company, Zoom's profitable scale was nowhere close to being tapped out in 2019 (its fiscal 2020). So, true to form with a lot of other cloud software companies, it used up most or all of its profits to keep expanding and maximizing its potential. As a result, free cash flow (revenue less cash operating expenses and capital expenditures, basically excess cash that ends up getting added to the balance sheet as an asset) was $114 million. Not too shabby, as it was good for a free cash flow margin of 18%.

On the free cash flow front, Zoom's metrics in the first quarter were nothing short of batty. Free cash flow was $252 million, good for a margin of 77%! I'm not one to make use of exclamation marks, but this seems like the right time to make an exception. Cloud computing companies often run gross profit margins (revenue less cost of the service) of 80% or more, and the long-term future bottom-line potential of these incredibly lucrative business models can only be speculated on at this point. Safe to say the long-term outlook for cloud business profitability is very promising, but did Zoom just give us a glimpse into a better-than-expected future?

Maybe. Or maybe this is simply a case of a company that ran out of places to spend amid a massive one-off bump in results. But even assuming Zoom finds new growth opportunities to invest in, or operating expenses simply catch up with the sudden jolt in revenue, this company has turned into a cash cow. Its trailing 12-month free cash flow margin is now 42%.

Here's what I'm trying to say: Even when using current full-year valuation metrics, Zoom is an expensive stock priced as if it will be able to continue disrupting the fabric of the global communications industry and consolidating market share to itself for at least a couple more years. But with so much spare cash flowing into the business each quarter, plus the $1.1 billion in cash and equivalents and zero debt currently on the balance sheet, maybe thinking about Zoom as the future of communications isn't such an absurd idea. After all, being rich affords one options, and that's especially the case in the business world. It's anyone's guess where Zoom decides to go from here, but having the optionality that ample cash affords is a luxury.

Either way, it's worth considering before taking a hard pass on this stock.