Please ensure Javascript is enabled for purposes of website accessibility
Log In Help Join The Motley Fool
Free Article Join Over 1 Million Premium Members And Get More In-Depth Stock Guidance and Research
By Keith Speights - Jun 9, 2020 at 7:04AM

This reported deal would be massive. But it's not likely to move forward.

Nothing should be absolutely shocking in the biopharmaceutical world. But I'll admit, the reports that surfaced over the weekend that AstraZeneca (AZN 3.08%) was interested in acquiring Gilead Sciences (GILD 0.82%) were surprising.

Bloomberg recently reported that AstraZeneca had reached out to Gilead last month about a potential deal, according to the always-intriguing sources of "people familiar with the matter." Should this acquisition actually move forward, it would be the biggest healthcare deal ever -- and there have been plenty of really big takeovers in the healthcare sector over the last few years.

The combination of AstraZeneca and Gilead would create a COVID-19 colossus, considering that both companies have leading coronavirus programs. But don't bet on seeing this deal ever happen. 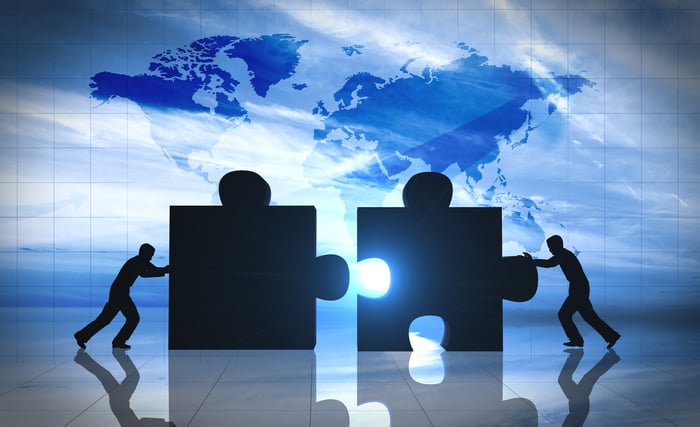 What the deal would create

AstraZeneca's market cap currently stands at around $140 billion, while Gilead's market cap is around $96 billion. The combination of the two big drugmakers would create the world's third largest healthcare company, behind only Johnson & Johnson and UnitedHealth Group.

As previously mentioned, the merger of AstraZeneca and Gilead would also result in a formidable player in the COVID-19 arena. AstraZeneca partnered with the University of Oxford on developing a COVID-19 vaccine that was reportedly selected by the Trump administration as one of the five vaccines most likely to be successful and worthy of U.S. government support. Gilead's antiviral drug remdesivir appears to be headed toward becoming the standard of care for treating COVID-19.

There's not any significant overlap right now between the two drugmakers' current lineups, though, despite both targeting oncology. AstraZeneca's top oncology products are targeted therapies Tagrisso and Lynparza and immunotherapy Lynparza, all of which treat solid tumors. Gilead's Yescarta is a CAR-T cell therapy targeting certain types of blood cancers.

Gilead hopes to soon enter the immunology market with FDA approval pending for filgotinib in treating rheumatoid arthritis. The biotech also is evaluating the drug in several other immunology indications. However, Gilead's immunology efforts shouldn't clash much with AstraZeneca's respiratory & immunology programs, which focus primarily on asthma and COPD.

Why it isn't likely to happen

While the fit between AstraZeneca and Gilead might seem pretty good, it's still very unlikely that the acquisition will actually happen. For one thing, Gilead reportedly wasn't interested. And after the initial inquiries by AstraZeneca, the pharma company's executives ultimately decided a deal wasn't worth pursuing, according to sources interviewed by British newspaper The Times.

Gilead doesn't need to be acquired. The company appears to be ready to return to solid growth after several years struggling with declining hepatitis C virus (HCV) franchise sales. Gilead's Biktarvy looks to be on track to become the biggest-selling HIV drug ever. Its HIV pipeline is impressive. The biotech also, as previously mentioned, has solid opportunities in COVID-19 and in immunology.

Meanwhile, AstraZeneca doesn't really need a big acquisition, either. The drugmaker continues to deliver solid growth thanks mainly to its strong oncology lineup. It also has a robust pipeline with 20 late-stage programs and over 50 life-cycle management (LCM) programs seeking additional indications for approved drugs.

There's also the matter of the size of any potential deal. AstraZeneca would almost certainly have to pay at least $130 billion (and probably more) to acquire Gilead. That large of an amount would require AstraZeneca to add a huge amount of debt since the company's cash position currently stands at around $4.2 billion.

The best bet for both AstraZeneca and Gilead is that both companies make smaller deals of their own, including both bolt-on acquisitions and collaborations.

Gilead has been much more active on this front over the last few years. The big biotech acquired Kite Pharma in 2017. More recently, it bought cancer-focused biotech Forty Seven for $4.9 billion earlier this year. Gilead also established a multi-year collaboration with Galapagos last year with a price tage of $5.1 billion, including a $1.1 billion equity stake in the biotech. However, AstraZeneca's reported interest in Gilead could mean that the big drugmaker is ready to crank up its dealmaking.

My view is that AstraZeneca and Gilead are likely to strike a key deal in the not-too-distant future -- just not with each other.