Please ensure Javascript is enabled for purposes of website accessibility
Log In Help Join The Motley Fool
Free Article Join Over 1 Million Premium Members And Get More In-Depth Stock Guidance and Research
By Billy Duberstein – Jun 10, 2020 at 9:01AM

Shares were down after-hours, but the results weren’t all bad, considering the unusual circumstances.

The retailer posted some heavy losses, as store closures compounded the problem of the industry being at the very end of the PlayStation and Xbox console cycles. That led to some ugly looking quarterly numbers, which sent shares down in after-hours trading.

Still, there were some silver linings in management's commentary regarding current trends and expectations for the rest of the year, when new consoles will launch. 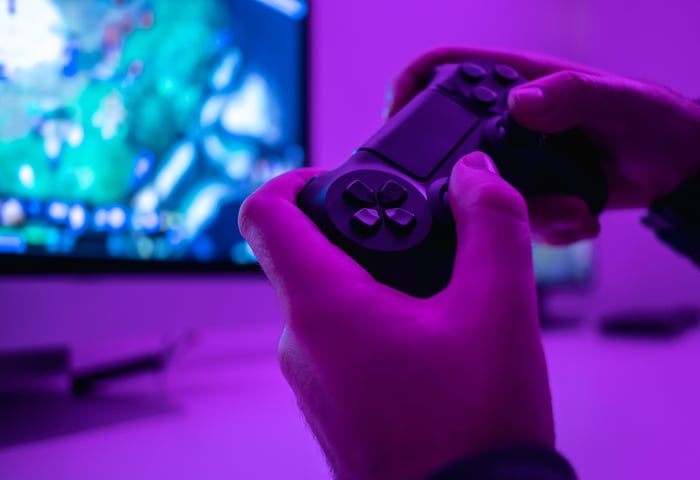 On the surface, GameStop's results were disappointing. Revenue of $1.02 billion fell short of analyst expectations, though cost-cutting measures helped non-GAAP (adjusted) net losses of $1.61 per share come in slightly ahead.

Total comparable store sales plunged 30% overall, as GameStop was forced to close stores across the U.S. in mid-March. Of the stores that were open, comparable store sales were down 17% from the prior year. E-commerce growth, which included curbside pickup, grew 519%, and 1,000% during the six weeks in which stores were temporarily closed, helping to partially offset the lack of in-store traffic.

Still, store closures not only caused an overall sales decline, but the curbside pickup also drove a lower-margin mix of products including consoles and new software, rather than the used games and collectibles easily sold inside its stores.

Those worrying about cash flow will point to negative adjusted EBITDA of $75.5 million, compared with positive $42.7 million in the prior year. Add in capital expenditures of $6.6 million, and and the cash outflow was even greater.

Negative: Net cash on the decline

GameStop bulls tend to point to the company's strong balance sheet, but that cash outflow did ding the company's net cash position. GameStop ended the quarter with $570.3 million in cash, against $417.2 million in debt and another $135 million drawn on its revolving credit facility, for a net cash position of $18.1 million. That's down from $79.6 million as of the end of GameStop's fiscal fourth quarter.

Another somewhat worrying sign is that GameStop is also attempting to refinance some of its 6.75% debt -- but at much higher rates. With all of its $417 million in debt maturing next year, GameStop is asking certain bondholders to exchange their notes for new notes maturing in 2023, but at a higher interest rate of 10%.

While refinancing some of its debt would put off the looming maturity and give GameStop more financial flexibility, the fact that management is trying to refinance at higher rates means it might be nervous about being able to meet the maturity next March, despite still having more cash than debt today.

Positive: May is improving

While the end-picture of the first quarter might look ugly, management gave some more reassuring numbers going forward. More stores reopened gradually after the end of the quarter, and of those stores that have reopened, comparable store sales declines improved to a loss of 4% in May versus the 17% loss posted in the first quarter. E-commerce growth also accelerated to 1,400%.

Despite the company having a $75.5 million adjusted EBITDA loss in the first quarter, management still projected positive adjusted EBITDA for the full year. That certainly implies better performance going forward.

On the conference call with analysts, management forecasted better near-term results as stores reopen, which will boost higher-margin used games software and collectibles sales. Better cost controls from the "GameStop Reboot" profit improvement plan that was implemented over the past year should also allow more of those sales to fall to the bottom line.

In addition, management pointed to several upcoming software launches that were delayed due to the outbreak of coronavirus, but which should launch in the next two quarters, giving a further lift to software sales. Finally, management expects a material boost when the new PlayStation and Xbox consoles drop before the holidays later this year.

In contrast with the bad results, management actually claimed that it had seen "increased demand in gaming" during the quarter as quarantines prompted new interest in in-home entertainment. As to why results came in short of expectations even with increased demand, management pointed to the end of the console cycle, which was "exacerbated by several titles that shifted into the second and third quarters due to COVID-19."

Backing up its claim, management noted that the small number of titles that were released during the quarter, such as the smash hit Animal Crossing, along with Final Fantasy VII Remake and Doom Eternal, all "far exceeded" their individual sales plans.

The earnings release was par for the course for GameStop. As has been the case for the past few years, results are declining, but there's a fair amount of uncertainty as to whether it's merely the aging of the prior console cycle, or if the shift to more streaming options will doom the company.

The latter concerns have made the company very, very cheap, with a market cap of just $320 million. Therefore, if sales and profits can rebound with the launch of the new consoles later this year, GameStop could have big upside. But if streaming options take away significant market share from physical game sales, all bets are off.