Investors are showing their confusion by sending benchmarks in different directions.

Wednesday morning continued to show that stock market investors are generally confused about the state of the financial markets. On one hand, a reopening economy is good news for most businesses, as they'll have a chance to start earning revenue and profits again. But some worry that the damage has already been done to the broader economy, and cash-strapped consumers might not be able to come back in full force right away.

Cruise ship stocks have been at the front of many investors' minds lately, and their share prices have been extremely volatile and responsive to changing outlooks on the broader economy. Big losses early today for Norwegian Cruise Line Holdings (NCLH -18.04%), Carnival (CCL -23.25%), and Royal Caribbean (RCL -13.15%) continued the trend of volatility that shareholders in the industry have seen, and there still aren't any obvious answers for what's next for the three main players on the high seas.

The declines for the major cruise operators were substantial on Wednesday morning. Norwegian took the most damage, losing 14% as of shortly after 11 a.m. EDT. Carnival suffered an 11% loss, while Royal Caribbean was the least hurt with an 8% decline. 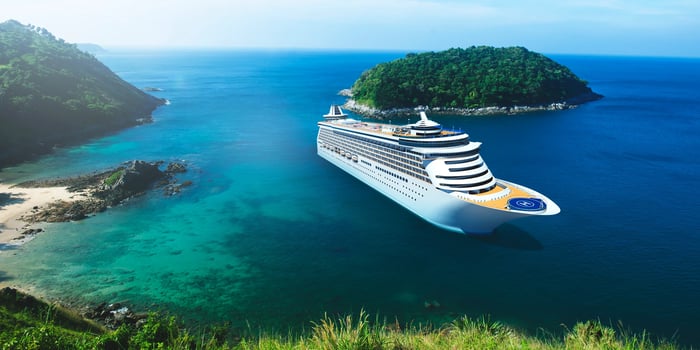 The news in the industry has been mixed lately. Even as operators try to get their ships back in service as soon as possible, they've also had to admit that they won't be able to get back to full capacity as quickly as they would like. For instance, Carnival said on Tuesday that its luxury Cunard line will remain in port through October, with the Queen Mary 2 and Queen Victoria idled until Nov. 1 and the Queen Elizabeth until Nov. 23.

Investors have to be afraid of what impact the relentless pushbacks on reopening dates will have on cruise enthusiasts. So far, the cruise operators have been smart about giving their most loyal customers additional incentives to keep them from losing heart. But with the high summer season now largely a lost cause and worries that companies aren't making progress in persuading regulators that they can operate safely, it's easy to understand why there's apprehension among shareholders.

Yet even with the challenges facing cruise companies, stock analysts still have bullish things to say about them. Royal Caribbean enjoyed a price-target boost on its stock from Stifel on Tuesday from $62 per share to $85, with analysts saying that the cruise company has indeed worked with the Centers for Disease Control and Prevention (CDC) to try to figure out how to restart ship operations safely. Citing comments from a recent investor conference, Stifel made it sound as if Royal Caribbean is being careful not to jump the gun until it can finalize a deal with the CDC, but the analysts are hopeful that the cruise operator can get back to normal sooner than expected (albeit potentially a couple of years down the road).

Stifel used the same general argument to justify boosting its price target on Carnival from $17 per share to $30. Booking trends among travelers remain strong, and as long as Carnival can start operating in time to capture traffic increases starting in early 2021, analysts are hopeful that the right conditions are in place for a recovery.

Investors in cruise ship stocks will have to deal with continuing volatility as all these uncertainties work themselves out. Only once passengers return to the open seas will there be enough clarity to start making informed assessments of what Norwegian, Royal Caribbean, and Carnival will look like in 2021 and beyond.