Please ensure Javascript is enabled for purposes of website accessibility
Log In Help Join The Motley Fool
Free Article Join Over 1 Million Premium Members And Get More In-Depth Stock Guidance and Research
By Sushree Mohanty – Jun 14, 2020 at 5:56AM

These pot companies are prioritizing what's essential to stay afloat during a pandemic.

What's essential for businesses when a crisis like the COVID-19 pandemic hits is to keep operating and try to make it out of the crisis without running out of money. Almost all the sectors are tumbling, with many companies facing the prospect of bankruptcy.

In most places, the marijuana industry was deemed essential amid widespread lockdowns -- which is why revenue is pouring in for the sector. While some pot stocks are shining -- namely the U.S. cannabis companies -- others are still recovering from their losses from 2019. Then, there are Cronos Group (CRON -3.75%) and Aphria (APHA), which are focused on staying afloat with their strong balance sheets. Even with strong financial backing from cigarette maker Altria (MO -1.92%), Cronos never went on an acquisition spree -- instead focusing on its core operations, strengthening its footprint in the medical and recreational cannabis markets, and funding research and development (R&D).

Its work on producing cannabinoids more cheaply and efficiently through biosynthesis with its partner Ginkgo Bioworks is impressive. Once successful in commercializing this technology, Cronos can earn an "economic moat" that will give it an edge over its peers. Conceptualized by Warren Buffett, an economic moat allows a company to gain advantages over its competitors to defend its long-term profits and protect its market share.

Cronos has launched a variety of vape products for the Canadian market, including cannabis vaporizer devices under the Cove and Spinach brands and its Peace Naturals branded cannabis vaporizers.These "Cannabis 2.0" products are cannabis derivatives (beverages, edibles, and vapes) that are part of the second wave of Canada's recreational cannabis legalization, whereas "Cannabis 1.0" legalized cannabis flowers, oils, plants, and seeds.

Cronos saw 55.5% year over year growth in net revenue to 8.4 million Canadian dollars in its fiscal 2020 first quarter. On the downside, its operating losses came in at CA$45.1 million, led by higher general and administrative expenses and R&D costs.

So, Cronos is looking at the big picture. Revenue from the U.S. market was 25% of total revenue in the first quarter when marijuana is not even federally legal. If and when the U.S. fully legalizes cannabis, a partnership with U.S. tobacco giant Altria could help Cronos capture a chunk of market share. There's already a huge demand for vape products in the U.S. Despite all the headwinds from the pandemic, Cronos' management is confident that 2020 will be a successful building year.

Aphria focused on its core values

There has been plenty of skepticism surrounding Aphria, which got entangled in a nasty scandal in 2018 related to its Latin American acquisitions. But lately, it's the only Canadian cannabis company to report consistently positive profitability -- in an industry susceptible to wild cash burn rates and earnings before interest, taxes, depreciation, and amortization (EBITDA) losses.

Aphria can be expected to report positive EBITDA compared to most of its Canadian peers, which are still struggling to breakeven. It recorded an adjusted EBITDA profit of CA$5.7 million in its recent third quarter. Meanwhile, Aurora Cannabis's management hopes to hit positive EBITDA by the first quarter of fiscal 2021.

Investors can't ignore how the company has turned around under CEO Irwin Simon's leadership. He wants to focus on Aphria's roots -- that is, its operations in the Canadian province of Ontario. The company saw a 96% increase in revenue from the year-ago period to CA$144.4 million. Canada's cannabis sales made up CA$64.4 million of total revenue. Aphria sold a mix of medical cannabis, recreational cannabis, and wholesale cannabis products.

Aphria also drove a chunk of revenue from its distributor CC Pharma in Germany, which came in at CA$86.7 million -- showing the popularity of its brands in the European medical cannabis market. Distribution revenue of CA$88.3 million included CA$1.5 million from other distributors.

When the uncertainty of a pandemic is high, preserving cash is a wise strategy. Marijuana sales are rising, no doubt, but sustainability is still a question.

Aphria has CA$515.1 million of cash and cash equivalents at the end of the third quarter and additional equity capital of CA$100 million. Cronos, on the other hand, saw a sequential decline of CA$171 million in cash and short-term investments to CA$1.3 billion -- but with Altria backing it, Cronos is in a safe place financially for a while. 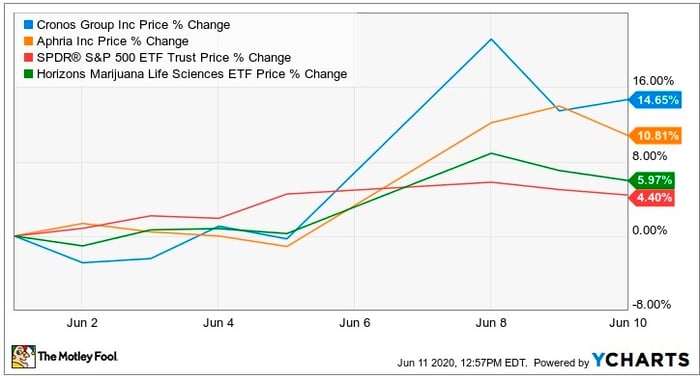 Hit for the long term

It was smart for leaders of Cronos and Aphria to understand that this is a long-term game and strategize with their respective expansions to avoid huge cash burn -- and now with U.S. legalization making progress, prospects could be even better. Though federal legalization in 2020 is highly unlikely, more states legalizing either medical or recreational cannabis will generate more revenue -- especially now that both companies have innovative cannabis 2.0 products available this year.

Investors who are in it for the long-term can see that the efforts of these two cannabis companies will protect them mightily from the headwinds of the COVID-19 pandemic, and help them thrive in years to come.