Please ensure Javascript is enabled for purposes of website accessibility
Log In Help Join The Motley Fool
Free Article Join Over 1 Million Premium Members And Get More In-Depth Stock Guidance and Research
By Jim Halley – Jun 14, 2020 at 5:45AM

There are good marijuana stocks out there, but these Canadian cannabis companies have serious red flags.

Tilray (TLRY), HEXO (HEXO 5.57%), and MediPharm Labs (MEDIF -0.79%) are three Canadian companies that have been popular cannabis stocks, but there are good reasons to avoid investing in them today. As with investing in any emerging industry, the ride is likely to be bumpy, but these three are flashing serious warning signs.

Canadian cannabis companies have had a particularly hard time because of regulatory issues with Health Canada. The agency's slowness in reviewing and approving licensing applications has hamstrung companies and that problem has been exacerbated because of the pandemic. All three of these pot stocks have lost considerable value in 2020. Year to date, Tilray is down 51.2%, HEXO is down 37.1% and MediPharm is down 57.1%, while The Cannabis ETF (THCX 3.21%), which includes Tilray and MediPharm, is only down 14.4%

Canada's largest province, Ontario, has roughly four dozen dispensaries in the 20 months since the country became the first G7 nation to legalize recreational marijuana use. Ontario allowed retail sales beginning in April 2019. By contrast, Illinois, which is slightly smaller in population than Ontario and didn't begin allowing recreational sales until this year, already has 60 dispensaries. 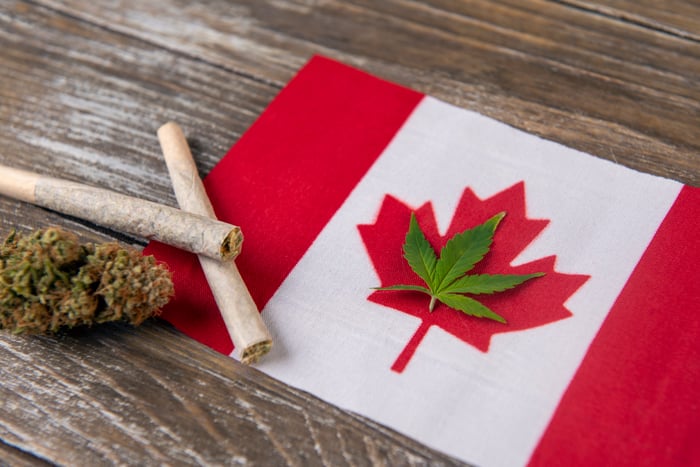 Tilray is growing, but its losses are accelerating too

Tilray, a British Columbia-based marijuana producer and processor, shared positive signs in its first-quarter report, with revenue of $52.1 million, up 126% year over year. That didn't obscure the big problem, though. The company's net loss for the quarter was $184.1 million, compared to a $29.3 million loss in the same quarter last year.

The race for market share in the cannabis sector is a marathon, not a sprint, and Tilray may not have enough strength to finish it. Founded in 2014, it has yet to turn a profit. As of March 31, it had $173.9 million in cash. Last year, Tilray burned through $384.9 million, at a burn rate of $32.5 million per month. That gives it less than six months to either get more financing to start turning things around.

Tilray has been tightening its belt, but the question is, will it be enough? Last month, the company announced it was closing its 406,000-square-foot indoor cannabis cultivation and manufacturing facility in Leamington, Ontario, and said it hopes to save $7.5 million annually from the move.The closure smacks of desperation, considering that the company just purchased the property as part of its $70 million acquisition of Natura Naturals last year.

It has other problems as well. On June 5, a Tilray stockholder, in a U.S. District Court in Delaware, filed a  lawsuit alleging executives of Tilray misled shareholders and engaged in insider stock sales throughout 2019.

Then there's Tilray's share price. The company went public in 2018 at $17 a share. At one point in September 2018, during midday trading, the company went full tulip fever, driving the stock up to $300. Since the beginning of this year, however, it has gone down the slide, hitting bottom in mid-April at $2.43 a share. It has seen a resurgence since then, but the stock remains volatile. On Monday, it closed at $10.44 on Monday. On Thursday, it fell to $8.36 by closing.

Legal issues, a falling stock price and a high cash burn rate all add up to one conclusion. Stay away, at least until the company's revenues can outstrip its other problems.

HEXO has bigger problems than being delisted

HEXO, based in Quebec, heard on April 7 that it might be delisted from the New York Stock Exchange because the company's shares had fallen below $1 for 30 consecutive days. The company has six months to show it can maintain at least a $1 share price to avoid being delisted. Last week, the company bounced back above $1, but on Thursday, it closed at $0.94.That's not good news, as any company not listed on the NYSE will have access to fewer investors and one of HEXO's prime ways of raising cash is by selling shares.

HEXO beat analyst estimates in its third-quarter report, but that's not much of a salve. While gross revenue increased 30% to 30.9 million Canadian dollars from CA$23.8 million in the second quarter, the company lost CA$19.5 million, compared to CA$7.8 million in the same quarter in 2019.

HEXO, which specializes in smoke-free and traditional cannabis products, had a CA$57.5 million share offering last month to raise more cash, but that further weakens earnings per share for investors.

HEXO's revenue is growing, but unfortunately, so is its spending. The company faces a real cash crunch in the coming months unless it can get more funding or make considerable cuts. The very real possibility of the company getting delisted is another factor that could drive the stock down. There's still too much going wrong to make HEXO a solid investment for now.

Last year, it brought in CA$129.3 million in revenue and actually had pre-tax net income of CA$6.8 million. For an emerging cannabis company, that was great news.

MediPharm's first-quarter numbers were due May 15, but the company shocked investors when it pushed back its report to as late as June 29, citing the impact of the COVID-19 pandemic on its business. It said it has delayed nonessential expenditures, trimmed executives' salaries, and cut jobs to weather the economic effects of the global pandemic.

The company said that the oversupply of bulk CBD extract in the market has driven down the selling price for its products and that it expects an impairment on its inventory somewhere between CA$10 million and CA$15 million.

Of the three companies, MediPharm appears to have the fewest problems, but that hardly makes it a nice investment. Investors ought to wait for more positive indicators.

There are better options in the cannabis sector

Since December, no fewer than seven Canadian cannabis companies have filed for creditor protection.

It's better to wait for more positive indicators, or better yet, invest in a U.S. cannabis company with fewer regulatory hurdles and a much larger market, especially a company that's already making a profit, such as Trulieve (TRUL 0.00%) or Green Thumb (GTBIF -2.09%).