But that's not even the craziest thing. We thought it was a big deal in August 2018 when Apple hit $1 trillion. But if Amazon stock jumps another 60%, it will become the first ever to hit $2 trillion: the largest of all large-cap stocks. And I think it will be exceedingly easy for Amazon to do...if the government doesn't stop it from happening first. 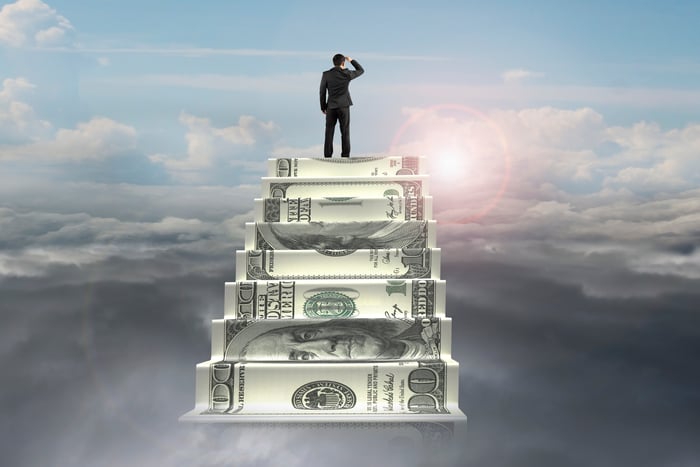 The tailwinds are strong

COVID-19 has brought millions of businesses across the globe to their knees. But a select few have been huge benefactors, Amazon chief among them.

This isn't terribly surprising. All the way back in 2012, I called Amazon out as my highest-conviction holding in the stock market. There were lots of reasons for this, but here's the important nugget: "The company's build-out of expensive fulfillment centers throughout the United States is designed to speed up and streamline delivery of products, further improving customer satisfaction. ... For a company to enter the space and attempt to make a dent in Amazon's dominance, it would have to first spend billions to match the company's scale and then hope it could offer something to win over customers."

That was written eight years ago. In the meantime, everyone has tried to improve their fulfillment capabilities. And yet Amazon clearly is still the top dog.

When the world was locked down and afraid to leave home (and we may easily find ourselves in the same seat come this fall), no one was better equipped to meet our needs than Amazon.

eMarketer's February forecast called for 2.8% growth in e-commerce for the year. It's revised forecast in the face of COVID-19: 18% growth. Obviously, Amazon won't capture all of that, but given its superior fulfillment network, it will capture an enormous swath.

And we haven't even touched how the work-from-home trend will only accelerate the importance of Amazon's real cash machine: Amazon Web Services. Suffice to say Amazon is perfectly positioned to meet rising demand for e-commerce in America.

How long can it last?

At the same time, Amazon could very quickly become a victim of its own success. Here's what I mean: COVID-19 has laid bare the incredible power Amazon wields. I would argue that the country would have had a lot tougher time coping over the past few months without Amazon's fulfillment network.

At the same time, our incredible reliance on this network has made it clear that Amazon's position in the economy is becoming untenably large. Here's how I summed it up on Twitter in March:

From the "two things can be true" category:

1) I have little doubt that $AMZN will be a major force that helps our country survive.

2) When all is said and done, $AMZN will have to be split. It will own even more of the market during the recovery. https://t.co/HplNLBv340

Already, we're starting to see this happen. The EU is reportedly ready to start cracking down on Amazon later this summer. Here are the basics of the complaint:

Because no one else has access to the data Amazon has on sales, no one could ever know which products are truly selling as well as Amazon does. Because the company keeps all that data to itself, it creates an unfair advantage.

I wouldn't at all be surprised to see similar regulatory enforcement crop up in the year ahead in the United States. If that happened, Amazon may be forced to split up, long before it ever reaches a $2 billion valuation.

Would it be that bad?

It's impossible to know exactly how things will unfold. But it can be a good mental exercise to think things through. If Amazon really were forced to split apart, my best guess is that there would be two separate entities:

You might notice that I don't think Amazon would sell any of its own products, minus proprietary ones it came up with on its own, like Alexa or Kindle. That's because without access to the data from the marketplace, it simply wouldn't make sense to continue down that road.

In the end, the combined pieces of what's left of the company might be worth more than $2 trillion today. So investors shouldn't be overly concerned with antitrust issues. You'll get shares in all the different pieces that emerge, and they'll still hold a lot of value.

Right now, shares of Amazon account for 12% of my family's real-life stock holdings. We have no plans on selling anytime soon. The stock may never reach $2 trillion -- and that's just fine with us. It should be for you, too.