Please ensure Javascript is enabled for purposes of website accessibility
Log In Help Join The Motley Fool
Free Article Join Over 1 Million Premium Members And Get More In-Depth Stock Guidance and Research
By Joe Tenebruso – Jun 16, 2020 at 9:30AM

Here's why you should care.

As large companies continue to evolve, so too does their impact on society.

But with shareholders demanding a relentlessly rising stream of profits, can massive technology companies like Amazon.com (AMZN 1.20%) and Facebook (META -2.88%) actually be socially responsible? 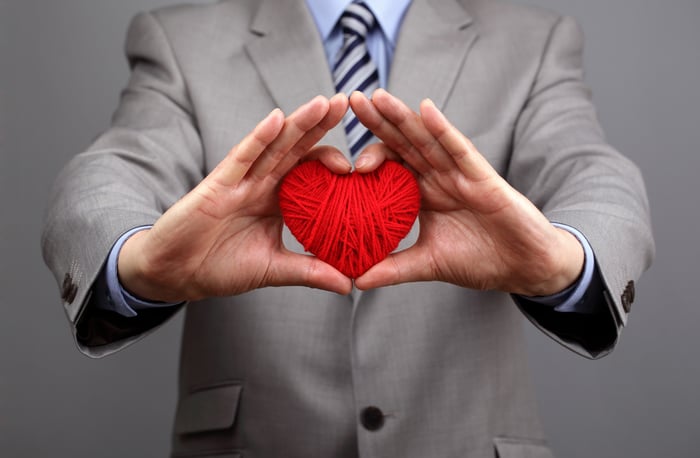 What is social responsibility?

Social responsibility is the idea that businesses should strive to have a positive impact on society as a whole. It seeks to expand beyond the long-standing goal of corporations to maximize shareholder value by creating value for all of a companies' stakeholders, such as its employees, customers, suppliers, and communities.

Why should investors care about social responsibility?

ESG (environmental, social, and governance) investing is steadily gaining favor among both professional and individual investors. Larry Fink, CEO of multi-trillion-dollar asset manager BlackRock, recently predicted a "fundamental reshaping of finance" that would see investors allocating more capital to businesses that are actively addressing climate change and its socioeconomic implications. Companies that operate in an environmentally and socially sustainable manner, Fink argued, would "provide better risk-adjusted returns to investors."

Businesses that function in an environmentally friendly way will no doubt continue to gain favor among investors as climate change concerns mount. So too will companies whose boards of directors ensure that their executives and other company leaders act in shareholder-friendly ways. But in these turbulent times, companies that can responsibly address key social issues could have an even bigger edge over their less socially conscious competitors.

How have the tech titans faired in terms of social responsibility?

Many of the largest U.S. tech companies have made great strides in the environmental and governance aspects of ESG, but their progress on social issues is less clear. Let's take a look at some examples.

Amazon is an economy unto itself, one that creates valuable opportunities for thousands of small businesses. And yet, the European Union will reportedly bring antitrust charges against the e-commerce colossus for using the data it collects from its third-party merchants to launch its own competitive products, according to The Wall Street Journal.

Moreover, while Amazon offers its warehouse workers relatively high pay and benefits, several employees have brought lawsuits against the company for what they say is inadequate contract tracing during the coronavirus pandemic. Additionally, employees have demanded that Amazon release more information pertaining to COVID-19 cases after at least eight of its warehouse workers reportedly died from the disease. Amazon CEO Jeff Bezos has vowed to spend at least $4 billion on employee safety measures and other COVID-related expenses. But will it be enough to protect employees?

Like Amazon, Facebook has faced its share of criticism. Senior executives reportedly blocked efforts by employees to make the social media giant's sites less socially divisive, according to The Wall Street Journal. CEO Mark Zuckerberg has also recently come under fire from civil rights leaders for not addressing what they say are inflammatory posts by President Donald Trump. Rival social media platform Twitter, in contrast, added a link to some of President Trump's tweets that urged people to "get the facts."

Google, which is owned by tech conglomerate Alphabet (GOOG -0.36%) (GOOGL -0.58%), is also dealing with hot-button social issues. Google has created multiple products that are enjoyed by more than 1 billion users around the world. Yet while most of what Google provides is free, many people are becoming increasingly concerned that the search king is harvesting users' personal information and serving it up to advertisers. This has led to a host of privacy issues and has driven some people to question whether Google has abandoned its "don't be evil" mantra.

So, can the tech titans really be socially responsible?

Companies such as Amazon, Facebook, Twitter, and Alphabet can certainly help lead the world forward by treating their employees, customers, suppliers, and communities fairly.

However, the challenge is that when it comes to certain social issues, not everyone agrees as to what the right course of action is. As long as humans disagree, businesses will need to walk a fine line between taking a stance on important social topics and factoring in the diverse views of all their stakeholders.