A few months ago, buying brick-and-mortar apparel stocks might have seemed like a high-risk endeavor. April retail sales were down 16%, with clothing and accessories down 89%, according to data from the U.S. Census Bureau. But with stores starting to reopen across the country, there are plenty of stocks that look potentially undervalued in the apparel industry. 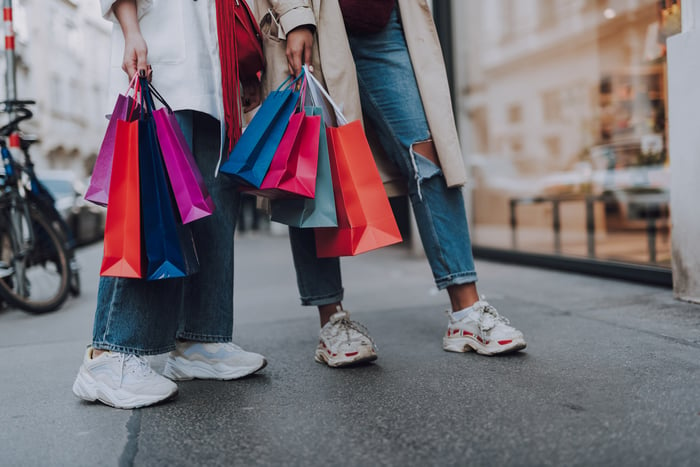 American Eagle was one of the best-performing brick-and-mortar apparel brands heading into the COVID-19 pandemic. Over the last five years, it had generated consistent positive comparable sales growth. The standout was the Aerie brand, which comprised about 19% of total revenue last year and reported comp sales growth of 26% in the fourth quarter of fiscal 2019.

While sales and earnings were down last quarter due to store closures, digital traffic, conversion, and transactions climbed significantly year over year in the last quarter, and management reported that this momentum continued into May even as stores began reopening.

Management isn't providing guidance, but it disclosed that reopened stores are already achieving 95% of last year's sales productivity. As of June 3, American Eagle had reopened 556 of its 1,093 stores.

PVH is home to top apparel brands Calvin Klein and Tommy Hilfiger. It also operates heritage brands, including Van Heusen and IZOD, among others. Altogether, this apparel powerhouse generated $9.9 billion in revenue last year, with non-GAAP net income totaling $711 million. Most of its sales come from Calvin Klein and Tommy Hilfiger, while heritage brands contributed $3.3 billion in 2019.

The majority of its global stores and wholesale customer stores were closed for about six weeks during the most recent quarter, which contributed to a sharp decline in revenue of 43% year over year. This led to a net loss per share of $3.03 on a non-GAAP basis. But with $1.8 billion of cash and available borrowing capacity, management believes it has plenty of liquidity to navigate the crisis.

Business should begin turning around in the short term. PVH expects 85% of its stores to be open globally by the middle of June, so this could be a good time to consider scooping up a bargain.

There has been a significant increase in demand for loungewear, underwear, t-shirts, and hoodies during the pandemic, and that certainly plays to the core strengths of both Calvin Klein and Tommy Hilfiger. The e-commerce business saw an uptick in orders last quarter, with the Calvin Klein North American online business turning a quarterly profit for the first time in history. PVH is redirecting product innovation and collaborations to serve the e-commerce channel, as well as redirecting marketing toward social media.

One of its biggest growth opportunities is expanding the Calvin Klein brand in Europe, where the brand is under-penetrated. Management believes the brand can reach $2 billion in sales in the region over time.

With stores beginning to reopen, PVH could begin to see its business stabilize heading into the second half of the year. The shares trade at cheap levels, currently at 5.5 times trailing free cash flow, and a forward PE of 9.7.

TJX is home to the T.J. Maxx and Marshalls off-price chains and is also the leading off-price retailer of home goods. The company is well-known for its treasure hunt shopping experience. It has an enormous base of 21,000 vendor partners from which it sources brand merchandise at value prices.

As of May 21, more than 1,100 stores out of its total store base of 1,600 worldwide had reopened. During the call, management disclosed that sales from these reopened stores were above last year's levels.

Recessions are typically its time to shine, since TJX can take advantage of liquidation sales from stores exiting the market to expand its selection. This doesn't guarantee that sales will grow during recessions, but this inventory strategy allows TJX to be a go-to destination for value-oriented shoppers when more consumers are tightening their wallets.

TJX expects stores to be mostly reopened by the end of June. The company was experiencing strong growth right before the COVID-19 outbreak. While it might take a while to recover, TJX should eventually work its way back to positive comp sales growth. With more than $4 billion of cash, management believes it has enough cash on hand to get through nine months of a prolonged sales decline of 50%, which is a worst-case scenario.

Investors are aware of TJX's advantages, which is why the stock is not cheap. It currently trades at 19.3 times last year's earnings, but at the current quote of $51.50, the share price is still off its 2019 high of $65. Analysts expect sales and earnings to be down this year before rebounding strongly next year. All said, TJX is a good apparel stock to consider for defensive purposes during recessionary years, but it also offers upside over the long term.