Please ensure Javascript is enabled for purposes of website accessibility
Log In Help Join The Motley Fool
Free Article Join Over 1 Million Premium Members And Get More In-Depth Stock Guidance and Research
By Reuben Gregg Brewer – Jun 17, 2020 at 8:30AM

The trash hauler's business is pretty mundane, but that's why it's such a great company. Is it a good buy today?

You put your trash out on the curb every week and it just goes away -- 20 million families and businesses in the United States can thank Waste Management (WM -0.92%) for that. Now ask yourself what you would do if that didn't happen?

It would very likely be a time-consuming nightmare for you to dispose of your own rubbish, which is why this trash hauler's business is so robust through all parts of the economic cycle. It's the kind of boring company that investors should love to own, right?

Maybe, maybe not. Here's a quick look at Waste Management's business and the attractiveness of its stock today.

A big, gross, and reliable business

Waste Management operates throughout the United States and Canada, collecting and disposing of trash. That sounds simple, but it really isn't. The part that most people see, a big green truck with "WM" on the side, is increasingly becoming an efficient operator that carries out its task with ingenuity. More and more these giant, expensive machines only require a single operator, with mechanisms on the truck actually picking up and dumping your bin's contents into the back rather than a person. 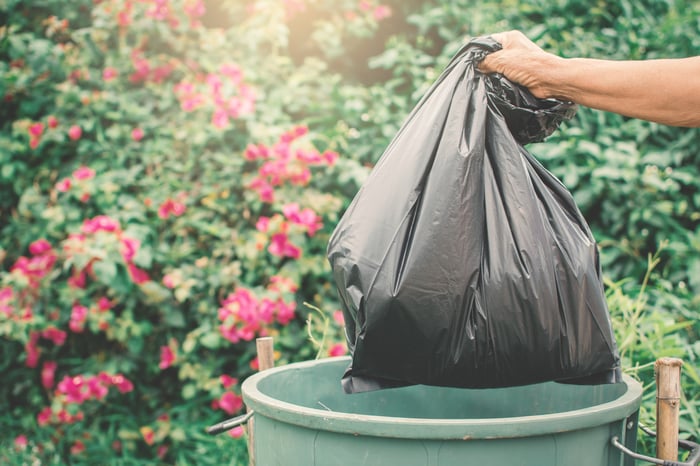 These vehicles are also shifting toward using cleaner fuels, like natural gas, to help minimize the company's impact on the environment. Moreover, making sure those trucks get to every pickup location in the most efficient way is no small feat and requires a great deal of computer processing to get right. Finding ways to do it better has been important to the company as this segment of its operations accounts for about 55% of the company's revenue.

And that's just the part that people see. Once Waste Management has picked up the trash, the company has to do something with it. First in line are sites that bring together all of the rubbish in one place, called transfer stations. After getting sorted out there, it's on to the company's nearly 350 landfills spread throughout the country. Landfills are highly regulated operations that very few people want in their backyard, so owning a large number of landfills gives the company an edge over smaller players. Even here, meanwhile, there's a lot of technology at play, with Waste Management operating 124 landfill gas-to-fuel facilities, using the trash it collects to power the trucks it operates. Landfills and transfer stations account for about 30% of the top line.

Waste Management also collects recyclables. At only around 5% of revenue, it's a modest business, but it's vital for the company as a way to attract municipal customers that are looking for a one-stop solution. All told, it would be very difficult (and expensive) for a competitor to recreate what Waste Management has to offer. Contracts are fairly long-term in nature, too, so the business tends to be very stable.

That stability shows up in the dividend, which has been increased annually for 17 consecutive years. The compound annual rate of increase over the past decade was roughly 6%, or about twice the historical growth rate of inflation. The payout ratio in 2019, meanwhile, was a reasonable 40% or so. That ratio keeps the dividend sheltered from financial adversity, should Waste Management face some business headwinds (such as an economic downturn like the one the U.S. is dealing with today). These are the types of things that any dividend investor likes to hear.

But there's a fly in the ointment here. 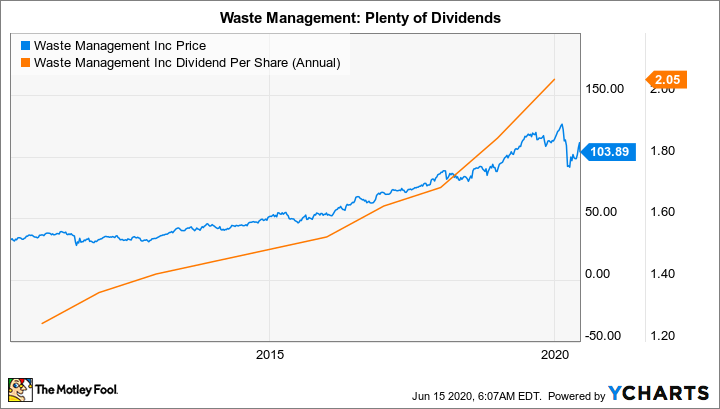 Long-term debt makes up around two-thirds of the company's capital structure. This is a capital-intensive industry, so that's not unusual or outlandish, but it is something that investors need to monitor. Acquisitions are a key way in which Waste Management expands its business in what is a pretty mature industry. With debt at such a high level, anyone who owns the stock will want to make sure the company doesn't bite off more than it can chew as it makes future acquisitions. That's not the situation today, with Waste Management covering its trailing interest expenses by more than five times, but it should be in the back of your mind just the same.

The thing about Waste Management is that investors aren't blind to the positives here. The stock, for example, currently trades at a price-to-sales ratio of roughly 2.9 compared to a five-year average of 2.5. The price-to-earnings ratio is 26 compared to a longer-term average of around 25. The price-to-cash-flow ratio is roughly 11.8 compared to a mean of 11.4. And, bringing in the last major valuation metric, the company's price-to-book-value ratio is roughly 6.5 versus a five-year average of about 6. At best, Waste Management looks like it's fully valued, though most would likely say it's a tad on the expensive side.

It's often worth paying up for quality, and Waste Management's business is a pretty solid one. However, if you take a forward look here, the stock's valuation looks even more stretched. The price-to-forward-earnings ratio, which takes analyst estimates into consideration, is nearly 28 compared to a longer-term average of just over 23. And the price-to-earnings-growth ratio (more commonly called the PEG ratio) is about 3.9 compared to a five-year average of 2.7. So, adding in these two forward-looking metrics, the stock looks even more expensive.

Not worth the price today, but...

All told, Waste Management is a well-run company that's rewarded investors over time. It's not perfect, of course (noting the heavy debt load), but as a business, it's pretty attractive. That's something that Wall Street seems to be aware of, however, with all of the usual valuation metrics pointing to a high price tag today. This looks like a stock that most investors would be better off putting on their wish list rather than in their portfolios right now. If there's a good pullback, however, don't wait too long to pull the trigger -- the opportunity to get a good deal might not last long.