Please ensure Javascript is enabled for purposes of website accessibility
Log In Help Join The Motley Fool
Free Article Join Over 1 Million Premium Members And Get More In-Depth Stock Guidance and Research
By John Ballard - Updated Jun 18, 2020 at 9:06AM

These three stocks are widely owned by users of the free trading app.

Robinhood has become a popular brokerage app for first-time investors, thanks to its easy-to-use interface. Its offering of free stock trades, fractional share trading, and cash management features has brought a new level of competition to legacy brokers.

Robinhood recently secured $280 million of new financing at a valuation of $8.3 billion. In December, the firm disclosed it had more than 10 million users on its platform.

Through its website and mobile app, Robinhood provides a list of the top 100 stocks owned by account holders. The stocks on the list show a diverse range of investing styles: everything from beaten-down industrial stocks to high-flyers. Three in particular that caught my eye were Walt Disney (DIS 2.33%), Tesla (TSLA 0.78%), and Advanced Micro Devices (AMD -2.19%). 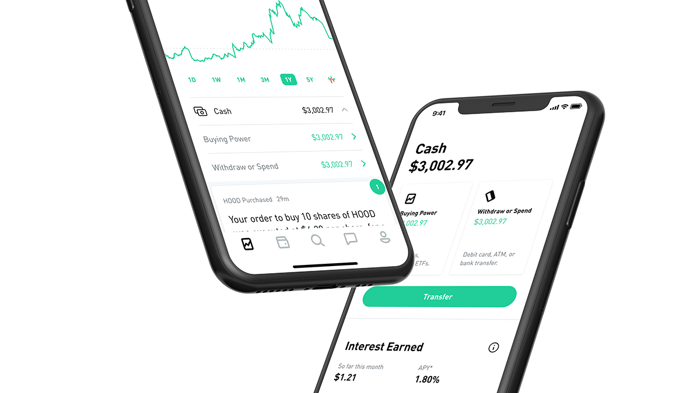 1. Disney: The magic is returning

Walt Disney is currently the fourth most-held stock by Robinhood investors. At the time of this writing, 601,183 users owned shares of Disney.

There has been a tug-of-war between the bulls and bears lately over the merits of buying Disney stock. The company has been issuing debt to keep its business funded while its theme parks have been closed and movie releases delayed. Even with its parks shutdown for only part of the fiscal second quarter ending in March, adjusted EPS fell to $0.60 from $1.61 in the year-ago quarter, with most of the loss attributed to the park closures.

However, as the Disney Parks blog posted on June 10, "the magic is returning." Disney is currently scheduled to reopen Disneyland and Disney World Resort in July. Shanghai Disneyland, Disney Springs, and several Disney stores have already reopened.

Disney's media networks segment, which is its largest revenue generator, may continue to face softness in advertising revenue. But Disney saw some bright spots last quarter, including record viewership for the first six episodes of The Last Dance, a highly rated documentary about former NBA star Michael Jordan, co-produced by Disney's ESPN and Netflix.

Disney+ benefited enormously from the shelter-in-place period around COVID-19. The new streaming service continues to rapidly add new subscribers, reaching 54.5 million as of May 4, and it is still rolling out to new geographies worldwide. But given the investments to bring content to viewers, it will take a few years for Disney+ to turn a profit.

The stock has rebounded off its lows from the COVID-19 crash, but it's still well off its high. The stock reached $151 a share last year around optimism about the growth prospects of Disney's direct-to-consumer initiatives. The stock likely won't reach that level again until investors see how quickly traffic returns to the theme parks after the reopening next month.

Further down the list of Robinhood's 100 most popular stocks is the electric vehicle maker Tesla at No. 18. Currently, 284,360 users own Tesla stock. The stock has already soared 127% year to date.

Tesla now has a total market value of $176 billion that is on par with one of the largest auto manufacturers in the world, Toyota Motor, which produced nearly 9 million vehicles in fiscal 2019. That has stirred a new debate over how much higher Tesla stock can climb since Elon Musk's company delivered 400,000 vehicle units over the last four quarters.

Toyota generates more than 10 times more revenue than Tesla, but investors love the growth they are seeing from the electric vehicle maker. Revenue climbed 32% year over year in the first quarter, as deliveries for the Model 3 and Model Y increased 39%.

Along with the increased production capacity, Tesla is gradually becoming more profitable. For the first quarter, Tesla reported its first quarterly profit in what is typically a seasonally weak quarter.

While it's difficult to make a case that Tesla is undervalued, the business is quickly increasing its capacity and scaling into a large auto manufacturer. Investors have a lot to look forward to, including the eventual launch of the Tesla Semi, Cybertruck, and Roadster that are currently in development.

AMD is the 28th most-held stock on Robinhood, with 221,877 users holding shares. The stock has soared 2,230% over the last five years and is currently up 17% year to date. AMD beat Intel to market with the first 7-nanometer chip and has been taking share in the server market.

Revenue surged 40% year over year in the first quarter. There was strong demand for Ryzen, Radeon, and EPYC processors across the consumer and enterprise markets. AMD saw cloud providers accelerate their infrastructure investments to meet rising demand from people using cloud services from home, which drove strong sales of EPYC server processors.

The stock is richly valued at 52 times forward earnings estimates, but there are plenty of new products in the pipeline to keep AMD's growth going.

AMD is on track to launch its RDNA 2 graphics processors this year. Another catalyst is the launch of Sony's PlayStation 5 and Microsoft's Xbox Series X game consoles, which are powered with next-generation AMD Zen 3 CPUs and RDNA 2 GPUs.

Despite expectations for a soft consumer spending environment in the second half of 2020, AMD is calling for revenue to grow approximately 25%, plus or minus 5%, this year.