Stocks were generally quiet on Thursday morning, with major benchmarks recovering from opening losses to climb back above the unchanged mark later in the morning session. Many were disappointed to see initial claims for unemployment benefits remain at elevated levels, pouring cold water on the bull case for a quick economic recovery. Yet investors also have high hopes that reopening businesses could be a catalyst to get many of those people back to work. Just after 11 a.m. EDT, the Dow Jones Industrial Average (^DJI 2.66%) was up 12 points to 26,132. The S&P 500 (^GSPC 2.59%) gained 4 points to 3,117, and the Nasdaq Composite (^IXIC 2.27%) picked up 34 points to 9,945.

We're in the lull between the peaks of quarterly earnings seasons, but some companies are still letting investors know how they're doing. U.S. Steel (X 7.01%) rattled shareholders yesterday with its outlook for the coming quarter, sending the steelmaker's stock falling. Today, U.S. Steel saw more losses as it took another step toward trying to deal with all the consequences from the current industrial slowdown.

Burning cash in the steel mill

Shares of U.S. Steel were down 11% Thursday morning, adding to their 10% loss from Wednesday. The initial decline came after the steelmaker released its fiscal second-quarter financial results, and today's drop continued to build on an increasingly dour outlook for the company. 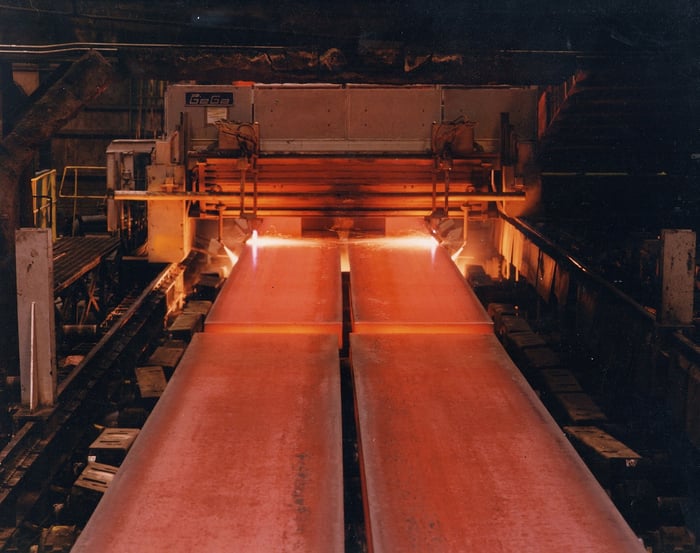 Yesterday, U.S. Steel said that it expects significant losses for the second quarter, amounting to roughly $3.06 per share on an adjusted basis. The steelmaker pointed to the impact of COVID-19 as one cause for the losses, but it's also looking at significant expenses related to restructuring efforts. As CEO David Burritt explained, much of U.S. Steel's production capacity has been idle during the quarter, reflecting reduced demand and the closures of many of its key customers' production plants. Those customers are now starting to reopen, and U.S. Steel is hopeful that it's seeing the low point for its business.

That said, U.S. Steel expects that it will need about $700 million in liquidity needs through the end of 2020. To address that need, the company announced a secondary stock offering to raise the needed cash. After the market closed on Wednesday, U.S. Steel announced the pricing for that deal, selling 50 million shares at $8.58 each. That was far below the $9.38 closing price for the stock on Wednesday, prompting today's further drop.

Can steel bounce back?

Several things have weighed on steelmakers over the past couple of years. Steel is at the center of trade disputes globally, especially between the U.S. and China, and so the mercurial relationship between the two nations when it comes to trade issues has made trading in steel stocks choppy. Also, investors have looked hopefully toward Washington, where lawmakers have repeatedly teased the possibility of a massive infrastructure spending bill to create jobs and boost the sagging U.S. economy. Those conversations have gotten louder in the wake of the coronavirus pandemic, as policymakers look for productive ways to pump more money into economic growth.

For now, though, most investors would be content with the shorter-term goal of simply ensuring that steelmakers have the cash reserves necessary to make it through the current cyclical downturn. If the economy recovers quickly from the pandemic-induced recession, then U.S. Steel and its metal production peers could follow suit. The longer it takes for things to get back to anything approaching normal, however, the greater the chance that companies with weak balance sheets like U.S. Steel won't be able to survive in their current form.