Please ensure Javascript is enabled for purposes of website accessibility
Log In Help Join The Motley Fool
Free Article Join Over 1 Million Premium Members And Get More In-Depth Stock Guidance and Research
By Daniel B. Kline – Jun 18, 2020 at 6:04AM

America has opened back up as if the coronavirus has gone away.

For better or worse, some Americans have decided that the threat of the COVID-19 pandemic has passed. You can see that just by venturing to public places where some (or even many) people have decided that masks aren't necessary and social distancing is at best a loose suggestion.

That's not to say that everyone feels this way, but it's clear from visiting malls, restaurants, and supermarkets that a lot of folks feel that they quarantined for long enough already, and that now it's time to return to normal. Rules vary by state, but it's safe to say that as lockdowns have ended some Americans have decided that the danger has passed (or that they're willing to accept the risks).

Coronavirus, of course, did not decide to sit the summer out. Cases are rising in some parts of the country, and that has led to concern that another round of COVID-19 lockdowns may be coming. That's not going to happen -- at least on a widespread basis -- and that may actually be bad news for the economy, and by extension the stock market. 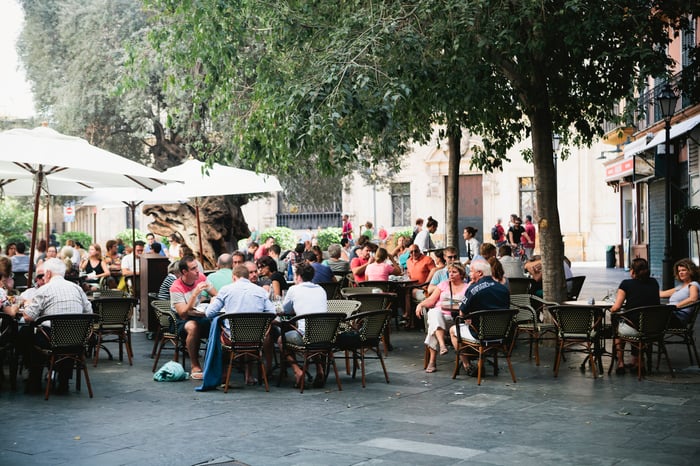 Living in the in-between

Most restaurants and retail establishments will continue to struggle until the pandemic actually passes. Even as states relax rules on capacity and social distancing becomes more a suggestion than a reality, some vulnerable populations won't get back to normal as long as that means possibly contracting a virus that's potentially deadly and for which we have no proven treatments.

"Sort of" opening and "kind of" having rules in place means that many businesses will struggle to make money. By following this strategy, we're mitigating short-term pain while keeping our economy in an in-between sort-of-open space for longer.

Many once-closed retailers and restaurants may see business return at levels far below what they need to be viable in the long-term. That means that only some employees will be called back, and the ones that are may get fewer hours, while tipped workers see their incomes drop.

As this sort-of-open period goes on, coronavirus cases will rise and calls will come to for new lockdowns to take place. That's not likely to happen, because a country that can't uniformly agree on wearing masks and social distancing isn't going to be broadly in favor of that happening.

It's impossible to know whether a longer lockdown or more strict rules would have ultimately been better for the economy and the stock market than what we're doing now. What's completely clear is that under the current system some consumers will continue to stay home and consumer spending will lag for an extended period.

What does this mean for the stock market?

A longer lockdown (or a second one) would close the economy and likely send the market down. It could also stop the spread of the coronavirus and shorten the overall difficult period we have to deal with.

Essentially, it's the question of whether you have a painful surgery that incapacitates you for a period of time but fixes the problem, or choose to do a lengthy rehab where neither the time period nor the results are guaranteed. We've clearly opted for the rehab route.

That means that the market will have its up and downs because each day will bring different news, whereas an extended lockdown would have likely been more predictably miserable for many businesses, but for a shorter, more predictable period. For businesses, and the markets, it's hard to know what the right answer is.

What we do know is that while there will be talk of new lockdowns, they're not all that likely to happen, because the public, at least some of it, has made its choice. Closing the economy once was difficult, and doing so a second time seems nearly impossible, even if the numbers warrant it.

We're going to limp forward with a nation that's kind of, sort of open for business. That's not likely to produce good results for many businesses, so it really becomes a question of whether at least a few quarters of bad numbers were a better choice than 1-2 quarters of truly terrible sales.