Please ensure Javascript is enabled for purposes of website accessibility
Log In Help Join The Motley Fool
Free Article Join Over 1 Million Premium Members And Get More In-Depth Stock Guidance and Research
By Jim Halley – Jun 19, 2020 at 11:25AM

As the prevalence of diabetes has grown, these companies are looking for solutions.

Companies that make continuous glucose monitors (CGMs) -- devices that diabetic patients wear to monitor the level of glucose in their blood -- have been largely unaffected by the COVID-19 concerns that have slammed other medical device companies.

Diabetic patients don't have the option of putting off care. Daily monitoring of blood sugar levels is essential to controlling the disease, which is the seventh-leading cause of death in the U.S., according to the Centers for Disease Control and Prevention (CDC).

The CDC says that in the past 20 years, the number of adults diagnosed with diabetes has more than doubled as Americans have aged and become, on average, more obese. 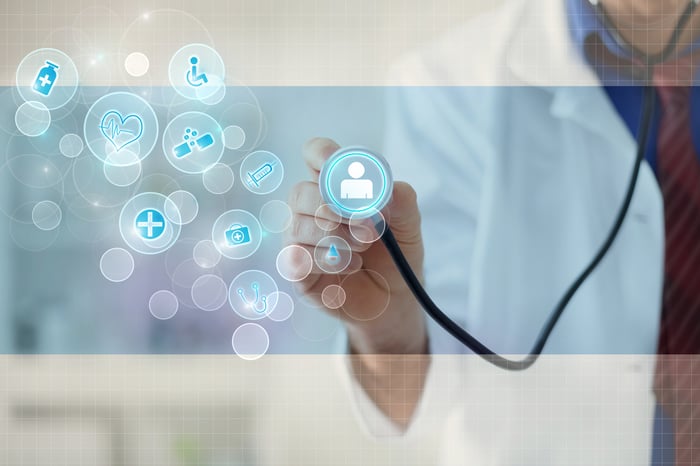 If you're looking for recession-proof healthcare stocks, makers of CGMs are good options. Here are three that have been soaring this year.

DexCom is keeping people away from doctors' offices

The key product for DexCom (DXCM -1.90%) is its G6 monitoring device, a CGM system with an unobtrusive patch that attaches to a person's skin and gives constant glucose readings that are then sent to a smartphone app. Patients don't have to prick their fingers for blood samples.

Besides being convenient, it also requires fewer trips to the doctor's office -- a good thing during a pandemic, as care providers can access the patient's glucose readings remotely.

Convenience is apparently good for business. As of Thursday's close, DexCom's share price is up 84% for the year. The company said its first-quarter revenue was $405 million, up 44% year over year. The report shows that a big part of that revenue -- $305 million -- comes not from the hardware but from its devices' sensors, which have to be replaced every 10 days at minimum.

The San Diego company reported its first-quarter net income as $19.9 million, a big jump from the $29.6 million loss it reported the same quarter a year ago.

Livongo is a rising star in the industry

Livongo (LVGO) has only been around for six years, and its stock didn't go public until last year. As of Thursday, the Mountain View, Calif., company's stock was up 179.8% year to date.

What caused that jump? As with DexCom, Livongo's digital platform is perfect for remote use. It allows physicians to track clients' glucose levels for diabetes and their blood pressure for hypertension without office visits. That has become a big plus during the coronavirus pandemic, but it's also a trend that's likely to continue. It's also a good blend for Livongo, because many people with diabetes also suffer from high blood pressure.

Livongo announced in January that it was entering into a partnership with DexCom, using that company's G6 CGM device with the Livongo Applied Health Signals platform.

Livongo's revenue is built around adding to its client base and then using artificial intelligence to coach members toward better health choices. As of the last quarter, the company said it had 1,252 clients, up 44% over the fourth quarter of 2019. (Each client represents a group of members; total member count is over 300,000.)

The company isn't making a profit yet, but in the first quarter it reported revenue of $68.8 million, which was a rise of 115% over the $32.1 million it made during Q1 2019. The company also kept its guidance and said it expected to make $290 million to $303 million this year.

While Livongo lost $5.6 million in the first quarter on a generally accepted accounting principles (GAAP) basis, it said it had non-GAAP net income of $3.9 million, worth $0.03 per diluted share. With a GAAP net margin of 73.7% in the first quarter, it won't be long until Livongo consistently turns a profit.

Insulet has new profits on the horizon

Like DexCom, Insulet (PODD -0.77%), which is based in Acton, Mass., has an impressive product that will drive sales.

The tubeless insulin pump manufacturer presented its newest product, the Omnipod 5, at the American Diabetes Association's 80th Scientific Sessions earlier this month. It hopes to bring it to market in early 2021.

According to Insulet, the Omnipod 5 combines a disposable closed-loop insulin pump with DexCom's G6 monitor. The product is small, waterproof, and wearable, attaching to a patient's back. The closed-loop system dispenses small amounts of glucose regulated by a smartphone app. It is also capable of dispensing other medication.

Through Thursday, Insulet's share price was up 10.7% year to date. The company's first-quarter numbers showed revenue of $198 million, a year-over-year rise of 24%. The report did, however, show a net loss in the quarter of $2.1 million, as opposed to the $4.4 million in net income it made in the first quarter of 2019. In the company's first-quarter earnings call, CFO Wayde McMillan said that some of those losses were due to the company's bringing a second manufacturing site online.

It's still easy to be bullish on Insulet. Last year, it had $11.9 billion in net income, up from $3.29 million the year before. In the long run, it appears to be on a good trend.

It's hard to make a bad choice

All three companies present excellent opportunities. However, I like DexCom because its G6 CGM appears to be the state-of-the-art system that other companies are pairing with, and the company has a longer record of making a profit. Livongo may present the best long-term option of the three, however, as it is a younger company that's growing at a faster clip.