Zoom Video Communications (ZM -1.18%) reported fiscal first-quarter 2021 results earlier this month that delighted investors, who have had a fantastic ride since the videoconferencing specialist's initial public offering (IPO) in April 2019. Shares have increased more than six times since then.

In Q1, Zoom's revenue soared 169% year over year to $328.2 million, crushing the $202.5 million Wall Street consensus estimate. Growth was driven by a huge boost in the number of people working, learning, and socializing from home because of the COVID-19 pandemic.

Moreover, the company greatly hiked its guidance. It now expects full-year revenue of $1.775 billion to $1.8 billion, which represents growth of about 187% year over year. It also expects adjusted earnings per share of $1.21 to $1.29, or growth of about 256%.

Earnings reports only tell part of the story. Below are three key things from Zoom's Q1 earnings call that you should know. 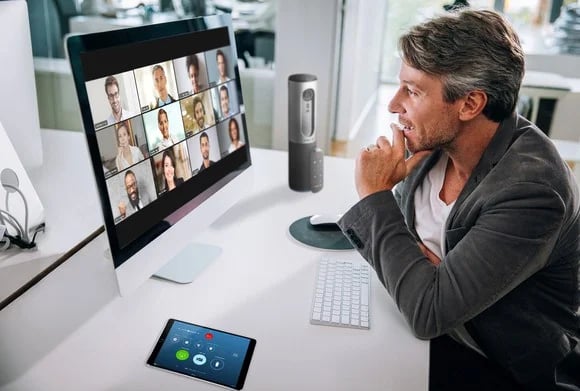 I think the one thing we know for sure is the TAM [is] bigger than we saw it before, right. And it's hard to capture ... the new TAM.

It's obvious that the pandemic accelerated the adoption of Zoom's core videoconferencing offerings. In addition, Yuan explained that the crisis made it clear to management that the company's total addressable market is larger than it previously thought. In other words, Zoom learned of customer use cases that it either hadn't included or hadn't adequately included when projecting its TAM.

A year ago, Yuan said on the fiscal Q1 2020 earnings call that management estimated the company's TAM at $43 billion or more by 2022. Management hasn't provided an updated TAM, likely because it's "hard" to estimate, as Yuan said.

We are thrilled to welcome Arm [Holdings] to the Zoom family. ... In Q1, Arm chose to deploy approximately 8,000 Zoom Meeting licenses, 800 Zoom Rooms and 9,000 Zoom Phones to deliver a one-touch experience to their employees globally.

We are also very happy to welcome Baker McKenzie. ... We feel privileged to be the video communications platform of choice for the No.1 law firm brand in the world.

Arm is a semiconductor and software design company owned by Japan's SoftBank. Certainly, this is a company that knows technology well, so this win is a particularly pretty feather in Zoom's cap. Moreover, what's relatively unique about this win is that Arm went all-in on Zoom's offerings, which suggests a high trust level in the company. Typically, Zoom uses a "land-and-expand" strategy -- meaning that it first sells a customer its core videoconferencing service, perhaps in only a limited manner, and then over time it will try to sell the customer more of its offerings.

I can't attest to Baker McKenzie being "the No. 1 law firm brand in the world," but it's well known that it's one of the largest law firms in the world. This fact alone makes the firm a notable win for Zoom.

The primary demand and focus of our new customers and expanding customers in Q1 was really ensuring business continuity and they were focusing mostly on video communications platforms. But as our focus for Zoom Phone is to sell into our existing installed base, it now creates a huge opportunity for more sales in Q2 and the rest of this year.

This quote doesn't need much explanation if you keep in mind Zoom's land-and-expand strategy previously mentioned. The fact that the company had a phenomenal Q1 in terms of selling its core videoconferencing offering means that it now has an expanded base of existing customers in which to try to sell its others products, including its Zoom Phone.

One more interesting note on the Zoom Phone: In Q1, the company had its largest ever deal for this product. A "very large global pharmaceutical company" -- an existing videoconferencing customer -- deployed about 18,000 Zoom Phones, according to Yuan.