Please ensure Javascript is enabled for purposes of website accessibility
Log In Help Join The Motley Fool
Free Article Join Over 1 Million Premium Members And Get More In-Depth Stock Guidance and Research
By Harsh Chauhan – Jun 19, 2020 at 6:45AM

With shares pulling back in June, investors should take a closer look at this cybersecurity play.

Fortinet (FTNT -0.31%) has been a winner amid the novel coronavirus pandemic that has ravaged the broader stock market so far in 2020, thanks mainly to an increase in demand for cybersecurity solutions as more people work from home.

The fear of a second COVID-19 wave and the economic toll of the outbreak weighed on Fortinet shares in June, but this could be an opportunity in disguise for savvy investors. Let's see why. 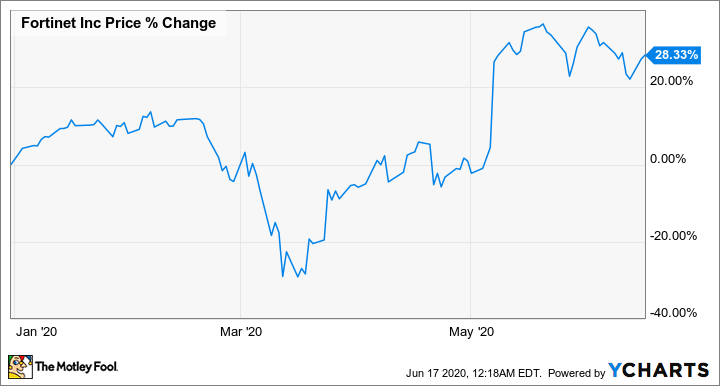 Fortinet remains a solid bet despite an expensive valuation

Fortinet stock isn't exactly cheap considering its trailing price-to-earnings (P/E) ratio of 61 and price-to-sales (P/S) multiple of 10. For comparison, Fortinet's P/E ratio averaged 47 in 2019, while its P/S ratio was 9.1. But there are a few solid reasons that Fortinet deserves this rich valuation.

First, the company has a cash-rich balance sheet with almost negligible debt obligations. At the end of the first quarter, Fortinet had around $1.4 billion in cash and short-term investments.

Second, the company also witnessed a nice uptick in its operating margin and cash flow, driven by a 25% increase in security subscription revenue to $211 million, or 36% of the total revenue. Fortinet's software sales were up 40% during the quarter. 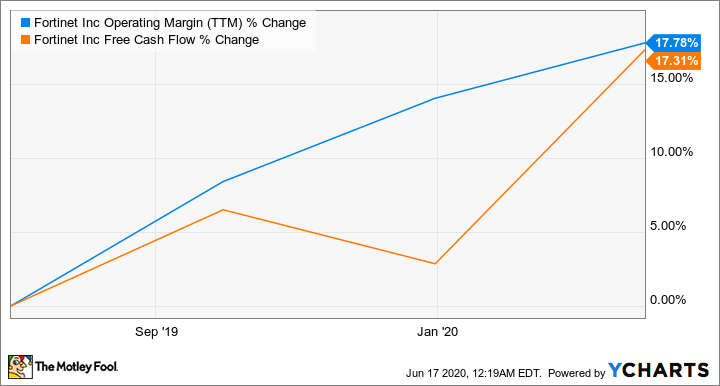 In all, Fortinet clocked 22% revenue growth in the March quarter thanks to strong demand across different verticals. It witnessed an increase in demand for its next-generation firewall appliances -- FortiGate -- and work-from-home solutions such as FortiToken, FortiAuthenticator, and FortiClient.

Fortinet management believes that these offerings helped it corner more market share in the firewall and software-defined networking environments, according to the last earnings conference call. This is evident from the growth in the size of deals signed by Fortinet during the quarter.

And finally, Fortinet's guidance tells us that it won't be running out of steam anytime soon. The company expects revenue between $590 million and $605 million this quarter, a year-over-year increase of 14.5% at the mid-point. However, don't be surprised if the company outperforms its own expectations, as demand for cybersecurity solutions could keep rising in the wake of the pandemic.

Fortinet has withdrawn its full-year guidance in view of the uncertainty caused by COVID-19. But that shouldn't deter investors from going long, as the industry it operates in is taking advantage of the pandemic.

Cyberattacks have increased substantially amid the novel coronavirus outbreak, with the FBI warning earlier that the number of attacks has quadrupled. This has forced organizations to ramp up their spending on solutions such as secure virtual private networks (VPNs) that allow remote employees to safely log in to their company's network.

Fortinet is taking steps to capitalize on this opportunity. The company recently pointed out that its "FortiASIC security processing unit (SPU) can deliver 10 times the VPN throughput capacity of comparable competitor solutions to support teleworkers." Fortinet is confident that features such as this will help it corner more market share. That could be a good thing -- the cloud VPN market is expected to clock a compound annual growth rate of 13.8% through 2025, according to Mordor Intelligence, hitting a size of $12 billion at the end of the forecast period.

Similarly, the next-generation firewall market that Fortinet is targeting with its FortiGate offering is also anticipated to grow at nearly 13% a year through 2025 to $6.7 billion, according to third-party research. The pandemic shouldn't have a negative impact on these projected growth rates, as a survey conducted by HFS Research in April revealed that 68% of the organizations plan to boost their cybersecurity spending in the wake of COVID-19.

All of this indicates that Fortinet may have enough fuel to sustain its impressive growth in the coming quarters, making it an ideal bet for investors looking for a solid cybersecurity play for long-term growth.