Please ensure Javascript is enabled for purposes of website accessibility
Log In Help Join The Motley Fool
Free Article Join Over 1 Million Premium Members And Get More In-Depth Stock Guidance and Research
By Danny Vena – Jun 19, 2020 at 11:51AM

The e-commerce platform joined BlackBerry and the Canadian government to create the app.

In a news briefing Thursday, Canadian Prime Minister Justin Trudeau revealed that the government had teamed with Canadian tech mavens Shopify (SHOP 0.64%) and BlackBerry (BB -2.08%) to develop a COVID-19 contact-tracing app that is set to debut in early July.

The app will begin testing in Ontario, and was built on a platform of Bluetooth software created for the purpose by Apple (AAPL -3.00%) and Google, a division of Alphabet (GOOGL -1.82%) (GOOG -1.98%). Users can upload their test results into the app, which is completely voluntary,  and it will not collect or share any personal information about the user, including their geographical location. 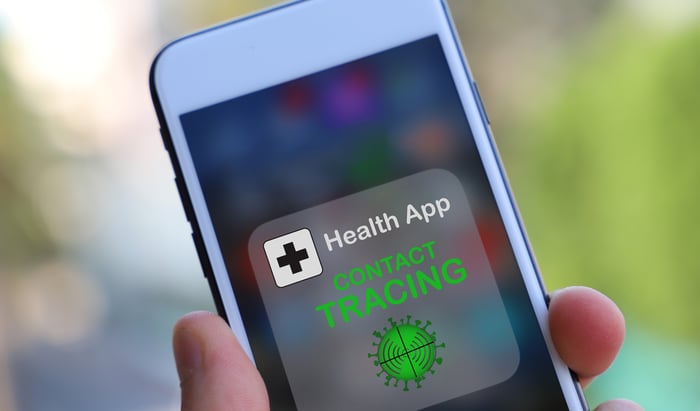 The system will deploy encrypted, anonymized codes that will alert users who may have been exposed to someone with the virus at any time over the previous 14 days. It will then provide quick access to resources that will help users navigate the next steps, include symptom monitoring, self-isolation, or getting tested.

The app was created in collaboration with Canadian Digital Service and Ontario Digital Service, and Blackberry. A spokesperson for for the e-commerce titan said that app wasn't a company initiative, but was developed by a group of volunteers from within Shopify.

"It is an extra tool that helps people move forward with confidence that we're going to be able to track and trace more of the exposure, or the potential sharing of COVID-19 virus, around the country," Trudeau said, who announced the partnership with the Canadian technology firms at a daily press briefing outside his home.

Many potential users worldwide have raised privacy concerns about contact-tracing apps. Ontario Premier Doug Ford addressed those fears and urged residents to sign up, saying that privacy was of the utmost concern and the No. 1 priority when developing the app and that Shopify and BlackBerry "nailed it."