Please ensure Javascript is enabled for purposes of website accessibility
Log In Help Join The Motley Fool
Free Article Join Over 1 Million Premium Members And Get More In-Depth Stock Guidance and Research
By Katie Brockman – Jun 20, 2020 at 5:38AM

If you're counting on the extra $600 per week in benefits you've gotten lately, there could be bad news coming.

Although many businesses are beginning to reopen, millions of Americans are still unemployed or at risk of being laid off due to the COVID-19 pandemic. An additional 1.5 million Americans filed for unemployment benefits last week, with nearly 45 million workers filing for unemployment insurance since mid-March.

There's a heated debate within Congress right now as to what to do about unemployment benefits. Some government officials are pushing to continue the $600 per week, while others have a different solution. While nobody knows exactly what will happen by the end of July, here are some of the possibilities. 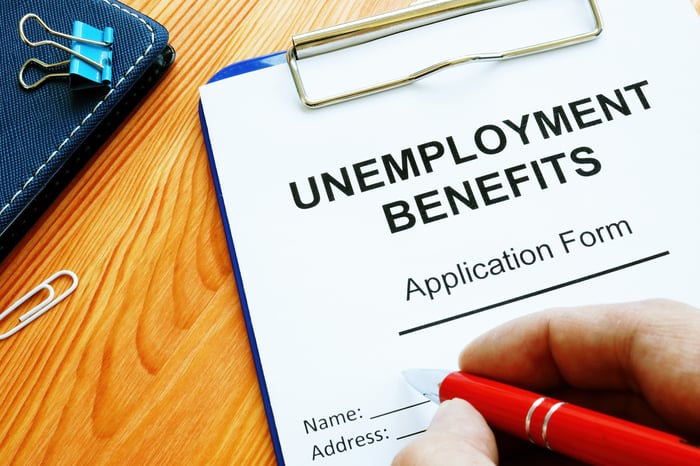 Proposal No. 1: Extend the federal $600 per week unemployment benefit

Last month, the House of Representatives passed a second stimulus bill called the HEROES Act. This bill included a second round of stimulus checks and also proposed extending the extra $600 per week in federal unemployment benefits through January 2021.

There are pros and cons to this proposal. If the $600 per week benefit is extended through January 2021, approximately five in six unemployment recipients would be receiving more in benefits than they would earn by working, according to the Congressional Budget Office. Those who are against this benefit extension say the extra $600 per week discourages unemployed workers from looking for another job if they could earn more by collecting benefits.

Those in favor of the extension, however, argue that when people have more disposable income, they're likely to spend more money -- which would serve to strengthen the economy.

Proposal No. 2: Provide a "back to work" incentive

One potential solution to the problem of workers choosing to continue collecting benefits rather than go back to work is to provide a "back to work" bonus. This GOP proposal, led by Republican Senator Rob Portman, aims to encourage workers to go back to work by giving them a $450-per-week incentive in addition to their regular wages.

This proposal has its fans and its critics as well. Those who support the proposal say it's a good way to ensure as many people as possible are working. Critics, though, argue that it encourages people to go back to work during a pandemic and potentially put their health (and the health of others) at risk.

Proposal No. 3: Offer a more tailored approach to benefits

A third proposal is the Worker Relief and Security Act, which would create a more tailored approach to how benefits are distributed. Under this proposal, unemployed workers can continue to collect the extra $600 per week in federal benefits until the coronavirus pandemic is no longer considered a national or state emergency. After that, benefits will gradually decrease over the next 13 weeks.

What does the future of unemployment benefits look like?

With the $600 benefit running out in a few weeks, Congress is scrambling to decide what to do next. The HEROES Act is currently in the Senate's hands, and while it's unlikely to pass, the Senate could develop its own stimulus bill with adjustments to unemployment.

Congress is currently negotiating the next stimulus bill, and likely won't settle on anything until July or August. So until then, the future of unemployment benefits is up in the air.