Please ensure Javascript is enabled for purposes of website accessibility
Log In Help Join The Motley Fool
Free Article Join Over 1 Million Premium Members And Get More In-Depth Stock Guidance and Research
By Demitri Kalogeropoulos – Jun 22, 2020 at 10:25AM

The spice giant will announce second-quarter results on Thursday.

Investors aren't sure what to expect from McCormick (MKC -0.83%) when it posts its fiscal second-quarter results in a few days. The spice and flavorings giant announced mixed growth metrics back in late March as the COVID-19 pandemic lifted some parts of its business while depressing others.

Management pulled its 2020 outlook at the time, citing unusual volatility in key markets like the U.S. and China. On the other hand, McCormick said that demand might continue soaring as consumers stocked up on at-home eating supplies.

In its report due out on Thursday, June 25, we'll find out which growth scenario is playing out for the packaged foods specialist as it enters the second half of its fiscal year. Let's take a closer look. 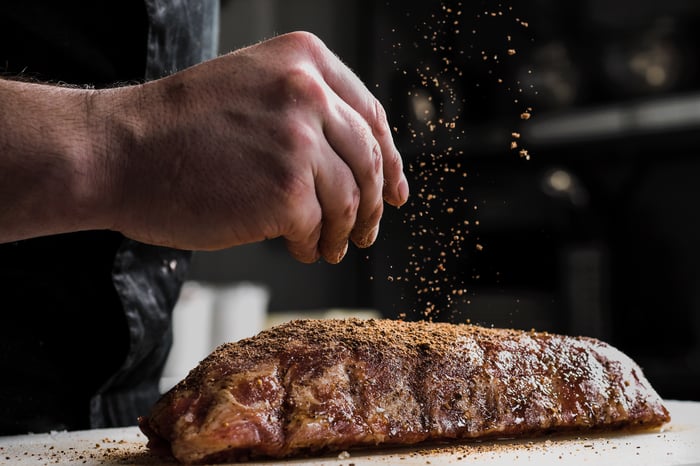 Back in March, McCormick said sales declined 1% in the three-month period that ended on Feb. 29, which included a major COVID-19 impact in China but almost none of the pullback in parts of Europe and North America. But management noted huge demand swings at the start of the second quarter that mostly implied good news for the business. Yes, its sales to restaurants were plummeting as the industry shut down. But demand soared at supermarket chains and warehouse retailers, jumping by as much as 90% in mid-March.

Examining organic growth in Thursday's report will help investors answer some of those expansion questions. Shareholders will be mainly interested in learning whether consumer demand stayed elevated through the entire quarter, as management suggested it would.

Essential businesses that contribute to the food supply have had to deal with extra COVID-19 expenses, and McCormick is no exception. The company is paying workers a premium hourly rate, for example, while spending more on health precautions like social distancing and intense factory sanitization.

These costs will impact its earnings power, so keep an eye on operating margin in Thursday's report. That metric was already on pace to edge lower in 2020 after climbing in each of the last two fiscal years. Pandemic challenges could amplify that slump, but McCormick might also post a modest bump in operating income thanks to robust sales growth.

McCormick has joined most of its consumer food peers in declining to issue a short-term sales outlook. Beyond the spiking demand volatility, there are huge questions about the path that the virus might take and the pace of the economic rebound ahead.

But executives on Thursday will still discuss how trends have changed in the past month or so, with the biggest variable being the reopening of the restaurant industry. In addition, many employers and schools are supporting continuous stay-at-home efforts, and so more meals are still being prepared within the house.

CEO Lawrence Kurzius and his team suggested at the start of the pandemic that this shift could mean that the jumping demand they saw in March might be more than just a temporary stocking-up surge that would reverse itself in future weeks. The benefit of several extra weeks of consumer shopping data will give McCormick much more evidence to rely on as management looks out to the end of the fiscal year and the start of fiscal 2021.