Please ensure Javascript is enabled for purposes of website accessibility
Log In Help Join The Motley Fool
Free Article Join Over 1 Million Premium Members And Get More In-Depth Stock Guidance and Research
By Eric Volkman – Jun 23, 2020 at 9:29AM

The company has a vested interest in getting such enterprises back on their feet.

Describing it as "a global commitment to elevate 50 million small and micro businesses (SMBs) worldwide in an effort to get local communities back to business," Visa (V -1.34%) is launching a set of support programs.

These initiatives include digital-commerce resource centers (which the finance sector giant says are live in more than 20 countries), continued deployment of its contactless payment technology to retailers, and the distribution of "back to business " kits with materials to help with branding and general commerce knowledge. 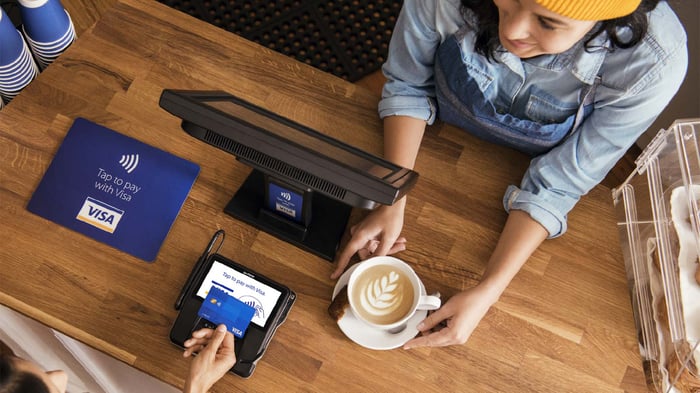 In its press release announcing these moves, Visa said that its main motivation is to help small enterprises recover from the coronavirus pandemic. The massive economic hit from the disease has particularly affected SMBs; according to Visa's data, 43% of these businesses have indicated they have only six months of funding for their operations. Additionally, less than 50% have an online store.

Visa's initiatives aren't entirely altruistic, of course. The company has a vested interest in helping to sustain merchants that accept payment cards, as these entities overwhelmingly accept Visa. It's the No. 1 global payment card brand, and is nearly ubiquitous in certain markets.

The company might also be concerned about the encroachment of relatively young, up-and-coming payment providers. Square has made inroads with SMBs in particular, with its distinctive terminals replacing traditional cash registers in many independent shops.

Still, Visa remains a powerful force in the financial world. On Monday, its shares rose by 1.4%, well ahead of the increase recorded by the main stock market indexes on the day.