Please ensure Javascript is enabled for purposes of website accessibility
Log In Help Join The Motley Fool
Free Article Join Over 1 Million Premium Members And Get More In-Depth Stock Guidance and Research
By Adria Cimino – Jun 24, 2020 at 9:15AM

Beyond Meat’s summer grilling special may test just how much lower pricing will lift sales volume.

Beyond Meat's (BYND -1.80%) burgers may be on more backyard grills this summer thanks to the company's effort to offer a lower-priced package during barbecue season. The maker of plant-based meat alternatives already has wowed investors with triple-digit revenue growth quarter after quarter. So, it's pretty clear lovers of beef alternatives have been putting the Beyond Burger on their menus.

Beyond Meat was even the No. 1 choice in the refrigerated plant-based meat category over a recent four-week period, the company said, citing data from SPINS, a wellness-focused market analyst.

Considering that kind of popularity, Beyond Meat may not have to lower prices to attract customers. But the fact that the company is making the move may help it address a growing risk: competition. 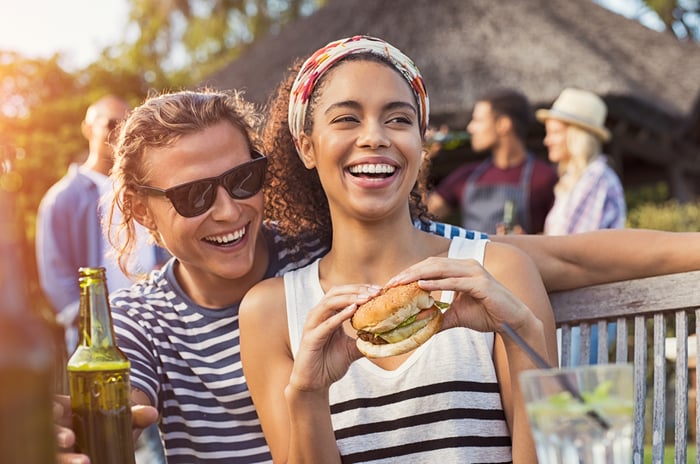 Rivals are multiplying -- including start-ups like Chinese company Zhenmeat and food industry giants such as Tyson Foods (TSN -1.38%). Zhenmeat told CNBC last week that in its home market it's launched plant-based pork tenderloin and crayfish -- both popular items in China. Beyond Meat sells its products in China as part of a collaboration with Starbucks. And former Beyond Meat investor Tyson launched its plant-based options under the brand Raised & Rooted in the U.S. last year.

But perhaps the biggest competitor -- and the company that most resembles Beyond Meat in offerings and strategy -- is Impossible Foods. Earlier this year, Impossible Foods dropped prices to distributors by about 15%. At the same time, the maker of the Impossible Burger reiterated its pledge to one day undercut the price of traditional ground beef.

Impossible Foods also is one step ahead in how it sells to customers. The company already offers its plant-based protein products for sale directly to consumers via its website (in addition to selling through grocery stores). Beyond Meat expects to start selling directly to shoppers online later this summer.

Beyond Meat and Impossible Foods dominate the market right now, a Markets and Markets report shows. And the demand for their products is expected to rise. At a compound annual growth rate of nearly 15%, the plant-based meat market is forecast to reach more than $30 billion by 2026, according to Reports and Data research.

Many players grab some share of the meat-alternative market. But unlike Tyson and other large food companies, Beyond Meat's whole business is plant-based alternatives. So, Beyond Meat must maintain a very large share of this market over time in order to satisfy itself and investors.

Pricing is key because Imposible Foods has made it a priority. It's also important if Beyond Meat hopes to win over meat-eaters. Standard ground beef generally isn't as expensive as plant-based options. Beyond Meat has said one of its goals is price parity with traditional meat in at least one category of product within the coming four years. Beyond Meat's latest move -- a 10-pack of burgers priced at about $1.60 per patty -- is a step in that direction, and it will allow Beyond Meat to test just how much lower pricing helps increase sales.

Are cheaper burgers the recipe for success? That's still to be determined, but it will help Beyond Meat hold its own among rivals even if it may hurt earnings.

If Beyond Meat continues along this pricing path, margins are likely to be lower down the road. And my concern is about recouping investment in the long term. Today, the company is focused on innovation and has been increasing research and development spending from quarter to quarter; gaining and maintaining high sales volume could help it recover those expenditures. But with so many rivals at the plant-based meat table, I'm not so sure Beyond Meat, whose shares have gained more than 100% so far this year, can assure its place at the top of the menu well into the future.